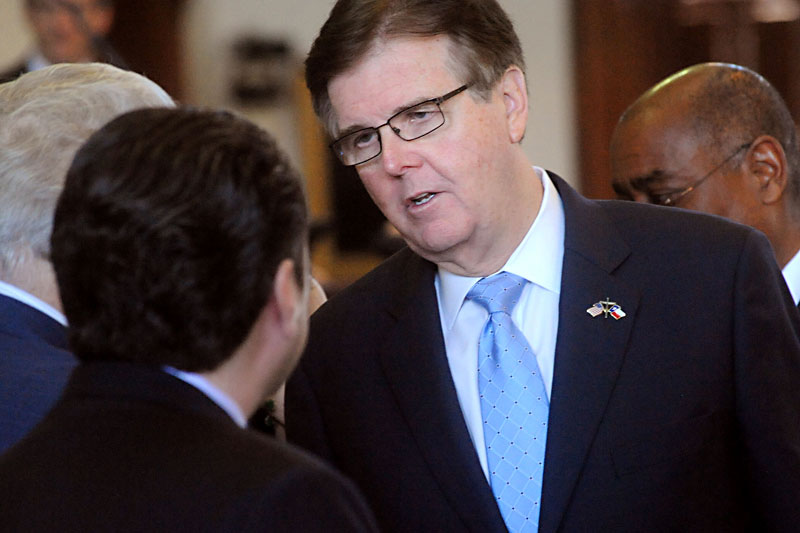 Even as employers demand more college qualifications, and more students want to be the first college graduate in their family, college seems less and less affordable. In his interim charges to senators, Lt. Gov. Dan Patrick seemed to propose a way to cut tuition. However, while his plan may dent bills for wealthier families, it could devastate the college hopes for the state's poor, working, and middle-class students.

On Aug. 23, the Senate Committee on Higher Education held an interim meeting to discuss Patrick's instruction to investigate how the state reduces and subsidizes tuition – in particular his instruction to "examine how students who do not receive the benefits of either bear these resulting costs."

In total, Texas runs 31 exemption programs open to all students (for example, the Hazlewood program for veterans' children, and dual credit exemptions) and 20 tuition waivers aimed at nonresidents (such as competitive scholarships, and in-state tuition rates for teaching and research assistants). These are reductions in bills, and in 2015 Texas forewent $752 million in revenue, cutting costs for 283,141 students in two- and four-year institutions statewide.

That's a lot of money left on the table that lawmakers are eyeing, but a more imminent threat is to the Texas Public Education Grant, founded in 1975 as a form of financial aid. In 2015, 52% of all TPEG payments went to students who received zero family financial support. Texas Higher Edu­cation Commissioner Raymund Pared­es told the committee, "The majority of the money raised through this program goes to the poorest students attending our universities." That financial aid is essential, but still insufficient: With only 12% of the state's most economically disadvantaged students receiving any kind of postsecondary qualification, Paredes called Texas "one of the bottom 10 or 12 states in terms of the access we provide to the poorest students."

The issue for Patrick is how the state pays for TPEG. Under current statutes, a portion of student tuition bills is set aside to pay for student aid. The end result is that wealthier students who pay full tuition subsidize poorer students, and Patrick has condemned this as a backdoor tax.

Ultimately, this is an issue of the Legislature's creation. State contributions to higher education finances have collapsed over decades: Then, in 2003, the Lege deregulated tuition. Inevitably, cash-strapped colleges raised rates, and used grants, exemptions, and waivers to enable access for economically struggling students.

Both school districts and students use the current system to increase college attendance, with price weighing heavily on everyone's minds. In recent years, Austin ISD has put a heavy emphasis on dual credit programs with Austin Community Col­lege; plus, increasingly, students are building up cheaper credit hours at two-year community colleges, and then transferring over to four-year institutions. According to AISD trustee and House Dis­trict 49 Democratic nominee Gina Hinojosa, rising tuition "is not just affecting low-income students, it's middle-class students too."

Yet the exemptions and set-asides that enable access have long been a bugbear of the anti-tax right, with bills filed every session since 2011 to revoke them. In 2013, his last session as a senator, Patrick himself filed Senate Bill 431, which would have completely eliminated set-asides. During the hearing, John Colyandro, executive director of the Texas Conservative Coali­tion Research Institute, said that set-asides are the wrong way to provide financial support, and the programs should be paid for through general appropriations. (What he didn't mention is that, with a fiscally super-conservative Legislature, such a cash injection seems unlikely – and he should know something about moving money between accounts, as he's most famous for being indicted while serving as executive director of Tom DeLay's Texans for a Republican Majority over money-laundering allegations). He said, "If it is socially good to go to college ... why make college more expensive for a host of students?"

House Higher Education Committee Mem­ber Rep. Donna Howard, D-Austin, understands that logic. She said, "When you hear about a set-aside, and you hear what Dan Patrick says about it being a hidden tax, and if you got rid of it then everyone's fees would go down, that sounds plausible." However, she compared the advertised student tuition rate to a car sticker price. She said, "That's not what most people really pay." Noting that many private universities use similar pricing structures to pay for bursaries and grants, she said, "A large number of our students are being subsidized by that sticker price. ... When you lower tuition, you're actually subsidizing the wealthier students."

Not that all set-asides are equal. Last session, Howard authored House Bill 2396, ending two smaller set-asides. One put money from medical students into the Physician Education Loan Repayment Pro­gram, but took in far more than it ever distributed. Another took 1% of all law student tuition and gave to it the Office of Attorney General to pay for recruitment. Howard described these as "superfluous," as opposed to programs like TPEG that "play an important role in the affordability of higher education in our state."

Echoing her sentiments, during the Aug. 23 meeting Paredes warned lawmakers that eliminating set-asides could further destabilize the Texas Grant – which has already reduced the number of students it serves from over 90% of eligible applicants last decade to 85% now, making college even less affordable. Moreover, he reminded lawmakers that waivers such as in-state tuition rates for TAs and RAs are powerful tools for attracting top-tier candidates, and that Texas' major universities already lag behind top-tier universities in other states in recruitment. Reduce those competitive inducements further, he warned, and UT could price itself out of the market for both the poorest undergrads and the most talented post-grads.

What's Next for Allan Elementary?
IDEA was sent packing – now AISD and the neighborhood face the school's 'repurposed' future