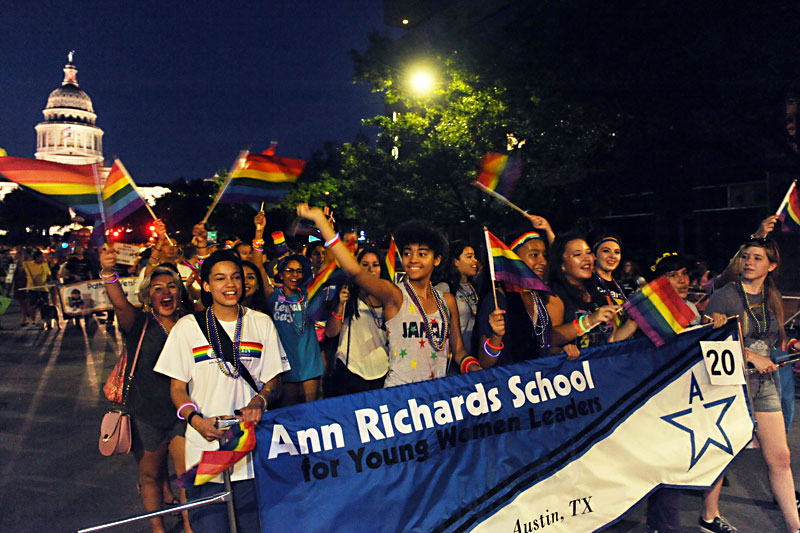 Austin's Pride Week capped off on Sat., Aug. 27, with a thunderous parade stretching from the Capitol all the way down to Fourth Street. Proceeds from more than 120 entries, floats, and performances were donated to the Austin Pride Cares program. (Photo by Jana Birchum)

The Never-Ending Agenda: City Council meets today (Sept. 1), running at full-tilt budget season speed, with a second public hearing on the budget and property tax rates, discussion of a proposed tenant relocation program, and a showdown over a proposed expedited development permit program – will they be made subject to "Bet­ter Builder" worker protection standards?

Former governor Rick Perry has joined the cast of Dancing With the Stars, premiering Sept. 12 on ABC. Having driven Texas to the far right, and failed twice to become president, now he will risk the waltz alongside discredited Olympic swimmer Ryan Lochte and rapper-turned-home-renovation-TV-star Vanilla Ice.

Breaion King, the teacher whose violent arrest in June 2015 sparked outcry last month when video footage of the detainment went public, has filed a lawsuit against the city of Austin and APD Officer Bryan Richter, who initiated the arrest.

Central Health will begin accepting bids from developers looking to build on the University Medical Center Brackenridge campus starting Sept. 1. The 14-acre site will be vacated and replaced in 2017 by the Dell Seton Medical School teaching hospital, across the way on 15th Street. Mixed-use development will likely replace it.

Texas' Court of Criminal Appeals granted a stay of execution to Rolando Ruiz last Friday. Ruiz, sentenced to death row for a 1992 murder-for-hire, was scheduled for execution on Aug. 31. The 44-year-old argued in a recent petition that his trial counsel erred in its presentation of mitigating evidence, and that executing him after two decades on death row violated the Eighth Amendment. The CCA stayed the execution pending further review.

Police Chief Art Acevedo was named Monday to the Department of Homeland Security's Advisory Council to review the use of for-profit contracts in the detention of unauthorized immigrants. The chief has historically been an ardent opponent of Immigration and Customs Enforce­ment, suggesting that its programs destroy families and eradicate community trust.

Austin's IT industry sees two massive changes this week. First, tape and hardware firm 3M informed employees that it is putting its 156-acre campus at RM 620 and RM 2222 up for sale. Second, Round Rock-based hardware firm Dell will complete its acquisition of commercial software and data storage giant EMC on Sept. 7.

County Commissioner candidate David Holmes has claimed his campaign office was targeted in an attack when his staff found a window shattered by an unknown projectile. Holmes, who is challenging incumbent Gerald Daugherty in Pre­cinct 3, said via Facebook that when he contacted APD about the damage, they initially "declined" to investigate, but that an officer eventually was dispatched.