What do Applied Materials, Bethany Unit­ed Methodist Church, Goodwill, Samsung Austin, and the Sierra Club have in common?

These strange bedfellows – joined by the Austin Regional Manufacturers Association, Austin Energy Low Income Customers, Building Owners and Managers Association, Greater Austin Chamber of Commerce, NXP Semiconductors, etc., etc. – are among the 22 signatories to an agreement with Austin Energy that will reduce utility rates for all AE's customers for the next five years. On Monday afternoon – after amending the allocation of rate reductions among residential customers – City Council voted to approve the agreement recommended by AE and the various stakeholders.

Mayor Steve Adler euphorically announced Council's approval. "Today was a good day," he said. "We lowered electric rates for everyone in a way that supports conservation, cleaner air, better business practices, and local control of our utility. ... A lot of people in Austin deserve credit today for something that will benefit everyone in Austin for a long time. Today was a very good day."

Tom "Smitty" Smith of Public Citizen also had good things to say about the agreement. "Overall, this is a win-win-win situation," he said. "Everybody gets a little. Large industrial users get the largest chunk of the rate reduction, but all consumers will get some reduction." (The only major holdout of the original stakeholders appears to be Data Foundry, which did not sign the agreement and told Council it might pursue other options.)

As approved by Council, beginning in January of 2017, AE has agreed to lower its rates to all customer classes – commercial and residential – by a total of $42.5 million. Five million dollars in decreases is dedicated to residential customers; the remaining $37.5 million will be distributed among six commercial classes, based on their levels of usage.

Following a lengthy negotiating process that began in January, when AE released a Cost of Service study and made initial rate proposals, and including a review by an independent hearing examiner, almost all the parties reached a negotiated agreement on Aug. 15. Two environmental advocacy groups – Public Citizen and the Sierra Club – announced their own decision to join the agreement last Thursday morning, just prior to Council's afternoon hearing.

The two environmental groups had continued to press AE management to incorporate substantive steps implementing Coun­cil's previous decision to phase out the coal-burning Fayette Power Project, beginning in 2022. Under the terms negotiated by the clean energy advocates, AE has committed to present to Council, early next year, a "road map" for decommissioning FPP, while maintaining the city's climate and affordability goals. The utility will also earmark $5 million from its contingency reserve fund to address FPP debt service.

Also as part of the agreement, by the spring of next year, AE will report to Council on the "commercial value of solar" energy, with a plan for compensating commercial customers for their on-site solar production.

Applauding the agreement, the Sierra Club's Cyrus Reed said, "AE needed to include definite steps toward retiring FPP, and we've confirmed that commitment." Asked if he is concerned about AE following through, Reed said, "Of course we're concerned, but that process includes us at the table." He added that the discussion had suggested "creative options" for dealing with FPP's debt obligations, and he looks forward to AE's analysis of the approaches next year.

Last week, the final obstacle for council members concerned how best to allocate the $5 million in residential reductions among the five "tiers" (levels of usage). Initial AE proposals included cuts for all the tiers except Tier 1, the lowest users. On Monday, after airing a number of options (see chart), AE returned with a plan that allocated smaller annual reductions for Tiers 4 and 5, thereby enabling the mayor to announce, "We lowered rates for everyone."

Kaiba White of Public Citizen commented on the overall agreement: "Nobody got everything they wanted, but it's a decent compromise that moves AE in a positive direction." Among the other provisions:

• $2 million to be dedicated to energy efficiency benefits and free high-bill audits;

• adjustable "House of Worship" rate caps will be maintained for four years;

• "seasonality" (i.e., different winter and summer rates) will be removed from the base rates;

• the discount for residential customers outside the city ($5.5 million total) remains in place (a sore point for those who believe it's an unfair subsidy for suburbanites).

• Finally, all of the signatories have agreed not to appeal the settlement to the state Public Utility Commission or the Legis­lat­ure, at least until the next AE rate review (2020). Applauding AE's Cost of Service study that was the basis of negotiations, Mayor Adler said, "It doesn't surprise me that this thing got settled. Everybody had the numbers, everybody had the data. Everybody knew they were solving for the same problem." 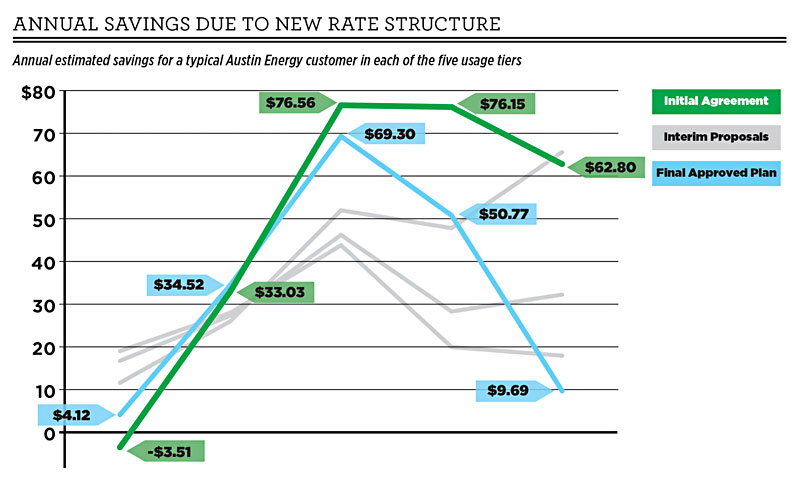 Austin Energy made various proposals to City Council on how to allocate the $5 million in residential rate reductions to the five "tiers" (levels of energy usage). Under the initial "agreement" proposal (green), Tier 1 customers would have paid slightly more annually for electricity, with heavier discounts for Tiers 4 and 5. Under the final plan that Council approved (blue), the largest discounts are in Tiers 3 and 4, and all customers receive some annual reduction.