Although Austin ISD's student population is on the decline, the number of homeless youth that fill its classrooms continues to rise, according to new data provided by HousingWorks Austin.

The latest statistics released by the affordable housing nonprofit show that AISD students identified as homeless under the federal McKinney-Vento Homeless Assistance Act climbed between the 2014-15 and 2015-16 school years, from 2,648 to 2,693. This is the fifth consecutive year the school district has seen an increase in homeless youth, the bulk of whom share housing with other people – or "doubled up" – because of economic hardship or housing loss.

By contrast, overall AISD enrollment declined by 1,000 in-district students in that time, and is projected to drop by another 7,100, to less than 77,000, within 10 years.

This dichotomy makes the gradual uptick in homeless students "particularly striking," said Mandy De Mayo, executive director of HousingWorks Austin. "If the population is decreasing, we would like to see the homeless population decreasing as well."

Both trends, De Mayo said, can be tied to one culprit: Austin's affordability crisis. As the city's population continues to explode, so do its rents. According to the Apartment List's monthly Rental Price Monitor, the average two-bedroom apartment in Austin cost $1,190 in November 2014. Less than a year later, the price was up $180 to $1,370. In the span of two years, households making $25,000 a year – that's 60,000, or a third of Austin's renters – lost access to nearly 7,000 affordable rental units, according to the city's 2014 housing stock analysis. That leaves about 12,000 apartments available for those families to rent, as of two years ago.

The more Austin loses affordable housing options, the more families find themselves packing up and moving out of the city altogether – "our suburbanization of poverty," De Mayo calls it. But those low-income families who stay are often forced to double up, take refuge in shelters or motels, or live on the streets and in cars. "The housing that's being replaced is not serving AISD families," the HousingWorks director said. "If you look at what's coming on the market now, it's really serving a different demographic. We need more housing stock that serves families."

Of course no single entity could solve Aus­tin's escalating affordability problem. Instead, there needs to be a collaborative effort between the city, the private sector, and AISD to address the needs of homeless students, De Mayo said. (AISD didn't respond to requests for comment.) For its part, on Sept. 7, Austin will be one of three cities to start its challenge to end youth homelessness within 100 days. AISD, meanwhile, has considered using its vacant property for affordable housing for students, their families, and its dwindling body of teachers (see "AISD Explores Its Options," April 8).

"Between all of these different strategies, implementing on them and keeping the spotlight shining on this issue," De Mayo said, "that's when we move the ball forward." 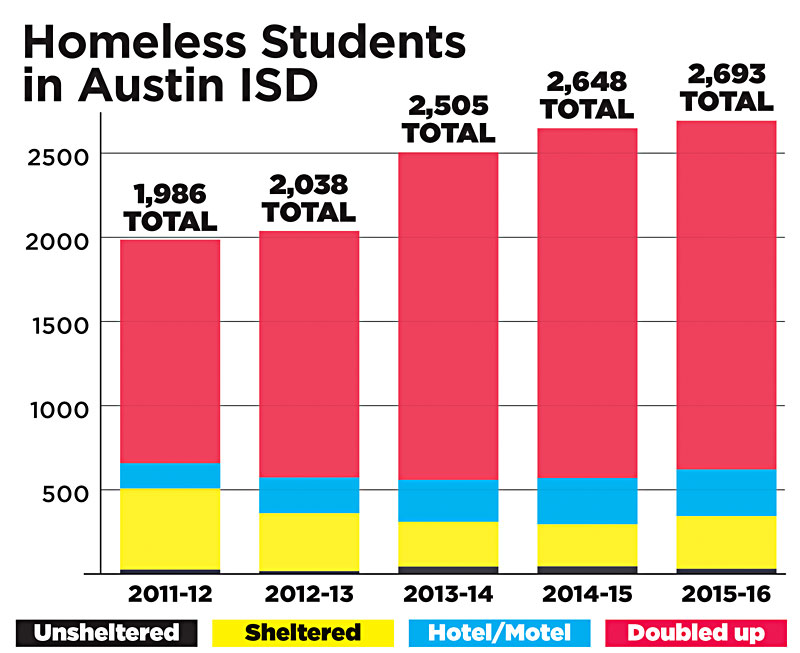