What Does Austin’s Explosive Growth Mean for Capital Metro?

Big changes are coming, but it’s not clear yet what they will be 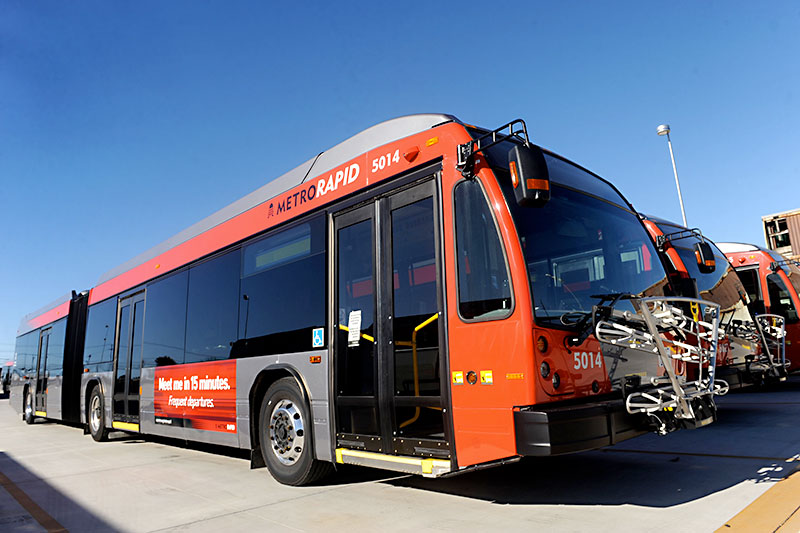 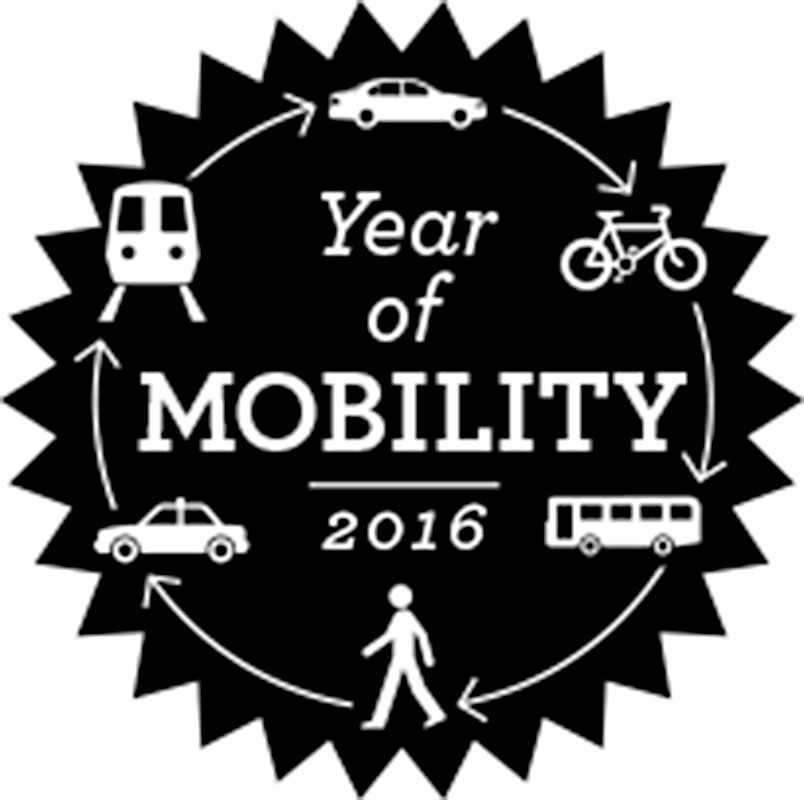 Big changes are coming to Capital Metro, but it's not clear yet what they will be. Like everyone else with a stake in Austin's transportation systems, Cap Metro CEO Linda Watson sees the problems they have to overcome, but she also sees the opportunities ahead. "Now that we've got the agency fixed, it's time to really focus on the improvements."

She's waiting on the delivery of Con­nec­tions 2025. That's the agency's 10-year strategic plan: five years of immediately achievable goals, plus another five of looser goals to be sharpened up when they start work on its replacement in 2020. It's effectively the partner document to Project Connect, the multi-agency long-term plan for transport in Central Texas, but with a sharper focus on Cap Metro's service area, and the urban core in particular. "They look at everything," said Watson. "Growth, development, demographics, ridership, efficiency."

That takes more buses, more drivers, and more money, and that last bit has always been the problem for Cap Metro. Over 60% of its revenue comes from the 1% sales tax levied across the service area, and the overall budget is actually more dependent on federal and state grants than it is on ticket sales. The agency is basically living on a fixed income, and before Watson arrived in 2010, its unspent reserves had shrunk to almost dangerously low levels. She said, "It was that perfect storm of a lot of capital projects and spending, and sales tax taking a dive." Now the local economy has improved and, even after several years of capital investment, that reserve should be up to $97 million by the end of the current financial year. With that financial safety net in place, and Connections 2025 imminent, "now we're in a position where we can actually start adding service again," said Watson.

Cap Metro's problem is opportunity cost: With a stretched budget, and shifting demands, someone is losing out. Center city residents griped about the demise of the 1L/1M along Guadalupe and Lamar, and about its replacements: The 1 is too irregular, and the 801 MetroRapid is too irregular, too expensive, and with too few stops. And indeed, total ridership along that critical corridor has reportedly dropped significantly under the new system. That's criticism the agency has taken: On July 25, the Cap Metro board approved a massive new investment, adding eight new stations and 15 new buses to the service (six stop pairs and seven 60-foot bendy buses for the 801, two stop pairs and eight 40-foot buses for the sibling 803 route along Burnet). When they come online in August 2017, that will provide the frequency increase riders have demanded, and the board has also discussed dumping the MetroRapid premium fee to attract even more riders to the flagship service. "We'll be able to provide better service for those routes," said Watson.

However, while admitting there are issues, the agency defends the system as it stands. The Federal Transit Agency ridership projections have been met for the 803 and surpassed for the 801, and the service broke 5 million total riders earlier this year. Dan Dawson, Cap Metro's vice president of marketing and communications, says MetroRapid is "highly used, some of the busiest routes in the system, and they give our customers quicker and more comfortable rides."

That comfort is nebulous to define but essential to tackle. In 2009, there was outcry when the agency dumped the Dillos, the charming but rickety, irregular, and uncomfortable Downtown circulators. Now riders expect wireless access and real-time online tracking. Again, that means more costs, and Watson said she's confident the agency can balance the expense of more and better quality service.

But how often the buses run, and how padded the seats are, are not the agency's only responsibilities. Or, in fact, its stated purpose. Per its own service guidelines and standards, its role is to connect "people, jobs and communities by providing quality transportation choices." That's the real issue. Every day, 150,000 people come in and out of the Downtown core for jobs, school, and daily business. "We're really looking at how do you move people in and out effectively," said Dawson, "and once they're in, how do they get around?"

Yet Cap Metro doesn't plan in a bubble, and it's not the only entity working on plans. For example, the city's Transportation Department is working on the Austin Strategic Mobility Plan, an effort to improve travel within the zone bordered by U.S. 183, U.S. 290, and Loop 360. What the city does will affect Cap Metro, and vice versa: So since Connections 2025 will be finished first, its findings will be folded into the ASMP. That reciprocity and data exchange is ongoing, but there have been calls to formalize the process. The recent Transporta­tion Strategy Recommendations report commissioned by the city at the instigation of Mayor Steve Adler (nicknamed the Tumlin report, after primary author Jeffrey Tumlin) called for closer planning ties between Cap Metro and the city, in a way that "clearly articulates Austin's commuter and basic transit needs from the perspective of maximizing total mobility."

But while Cap Metro and the city talk, it doesn't necessarily mean they're always on exactly the same page. Council has placed $720 million in transportation bonds on the November ballot, and there's a noticeable lack of line items that are easily identifiable as transit-specific. Instead, Dawson noted that the proposed projects – such as improving sidewalks and adding bike and transit priority lanes – are at least "transit-supportive." And several of the corridors listed for major infrastructure investment – Guada­lupe, Riverside, and Burnet – are some of the most heavily used by Cap Metro buses and passengers. Dawson said that city investments in technical fixes like improved signals "will improve service quality and reliability and make our services more useful and attractive." However, he noted that Cap Metro's feedback on the bond plan had "suggested more" investment in those technologies and changes than is proposed.

Like every other agency, Capital Metro is contending with Austin's growth. It's a pretty simple problem. When the agency was founded in 1985, the city population was less than half of what it is now. The problem is not just the population that has grown, but where those people are. For context, when Cap Metro first started running buses, there were no houses at Circle C, and Round Rock and Pfluger­ville were small rural communities, rather than massive dormitory communities for Austin workers.

So while 30 years ago, Cap Metro's core business was getting residents to and from central employers to central neighborhoods, now they're answering a different question: how to get people in and out of the city, and convince commuters who may even be crossing county lines to find an alternative to highway driving. Moreover, the forecasts built into Connections 2025 show that the population just in the core service area will increase by 30% in the next decade. Watson said, "We're spending a lot of money to bring them back into town for jobs."

That growth means an end to business as usual, and it's a conundrum facing every growing urban community. Watson said, "Do you try to serve every neighborhood, or do you focus [on] major corridors where you'll really impact congestion and increase ridership?" During a June board meeting she presented that conundrum, and the feedback was, she said, "To a board member: 'We want both.'"

Yet the agency changed as well. It finally got into the train business with MetroRail, which faces criticism from some Austinites as being a suburban commuter line for Leander, and complaints from regular users that it's standing-room only at peak hours. So that's another area of immediate investment: four new rail cars, track upgrades, and an additional 1,210 park-and-ride spaces – Watson says they'll be "doubling the capacity and doubling the frequency of that service." There's even talk of relocating the Kramer Lane stop closer to the tech communities in North Austin. "It's expensive," she said, but "the developers and the employers out there are very interested in it, and it makes sense to us."

Cap Metro even has a ridesharing program of its own, the MetroRideShare vanpooling program, with 200 vans up for lease by commuters. While not the agency's most high-profile program, it's quietly one of its most successful, with a 48% usage jump last year alone. "That's why our park-and-ride service is doing well," said Watson.

The diversifying portfolio is unlikely to shrink, and that fixed income will be spread further. That's why Watson and the agency are so fixated on Connections 2025: Once the board has the finalized report, that's when priorities will be selected. "The unfortunate part," she said, "is that we're not going to be able to do everything we need to do, or are asked to do."

Capital Metro's Connections 2025 – its 10-year guiding document for transit provision in the Austin area – won't be completed until later this year. But on Aug. 22 the planning team presented the Cap Metro board with a first overview of what they're considering. Here are the bullet points of what staff is proposing:

• Increased Frequency: One of the biggest complaints about Cap Metro has been long delays between buses. The draft plan proposes increasing the number of high-frequency routes (with a bus every 10-15 minutes) from six to 17.

• Simplified Routes: The underlying mantra seems to be "from where you are to where you want to be." Routes will be straighter (meaning less delays turning), and go to the most-demanded destinations.

• Simpler Fares: Get rid of the current two-tier pricing system and replace it with one flat fare scheme for regular and premium routes.

• More and Better Stops: Redesign routes and potentially add stops. The target is to have 98% of existing users within five minutes of their nearest stop.

• Fewer Routes, More Service: Merge existing near-identical routes to increase provision. That could mean some established routes will disappear, but with that "98% within five minutes" target, riders will still have an option.

• Improved East-West Access: Like the city's main arterial roads, Cap Metro's routes tend to be north-south, making getting across Austin near-impossible. The draft plan calls for more east-west routes, and increased service on existing ones.

• More MetroRapid: Add two new routes (one through East Austin, one through Downtown), add more stations on the existing 801 and 803 services, and increase frequency on all four to a bus every 7-10 minutes.

• Buses First: The plan calls for more dedicated transit infrastructure, such as dedicated bus lanes, and signal priority technology. That will mean working with the city, Travis County, and the Texas Department of Transportation, all of which administer roads within the Cap Metro service area.

The draft plan now goes through an 11-day community input process, beginning with a public meeting on Tuesday, Sept. 6, at 5pm, at Dove Springs Recreation Cen­ter, 5801 Ainez. For more info, and an interactive map of proposed route changes and additions, visit www.connections2025.org.

A version of this article appeared in print on August 26, 2016 with the headline: Focus on the Improvements 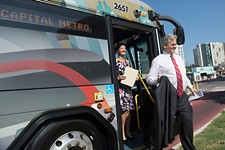 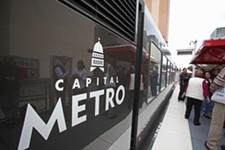 Leander, Cap Metro Not Breaking Up Yet
Residents turn out to support transit agency