Austin voters have the option this November to choose between a Fulbright scholarship recipient and English professor, or a man who once compared advocates of evolution science to Nazis and slave traders, to lead their children's future on education. Two Travis County-based seats at the Texas State Board of Education, historically a breeding ground for right-wing extremists, are up this election cycle, featuring Democratic candidates who ran, unsuccessfully, for the respective positions in 2012. Rebecca Bell-Metereau, the aforementioned professor, again hopes to unseat longtime GOP incumbent Ken Mercer in District 5, while Judy Jennings, an education policy expert and former teaching assistant at UT-Austin, is looking to beat the executive director of the Texas FFA Association, Republican Tom Maynard, in District 10. Both women boast extensive teaching and education experience. While Mercer has comfortably worn his right-wing politics on his sleeve since 2007, Maynard is less vocally conservative, even voting for a plan to have university professors fact-check textbooks in 2015, going against most of his Republican colleagues. Keep in mind the districts are expansive (District 5 encompasses 11 Central Texas counties, for example) and in 2012 went solidly Republican. The SBOE is tasked with establishing the state's public school curriculum standards, managing the state's Permanent School Fund, and approving textbooks.

Local Democrats Take Another Shot at Education Board
Third time's a charm? 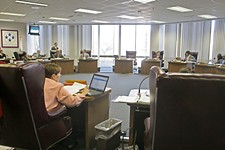