The 75 acres where the proposed Grove at Shoal Creek planned unit development sits fall outside of District 7 boundaries. That hasn't stopped either of the candidates running from talking about it. The incumbent, Leslie Pool, in 2012 founded the Bull Creek Road Coalition, the watchdog group that has followed the project since before developer ARG Bull Creek Ltd. bought it. Though the longtime activist stepped down from her role in the organization in 2014 to become a council member, she's been a vocal critic of the PUD and what she calls the unprecedented pace at which it has moved through the zoning process.

Her opponent made a name for herself doing the opposite. Natalie Gauldin, an Allandale homeowner and technical writer, started the Friends of the Grove Facebook forum last year. She used her presence at board and commission meetings to speak on behalf of ARG and her membership in the Friends of Austin Neighborhoods to build support for a run. Of the Grove, Gauldin stressed it can't be her main campaign issue, nor is it the sole reason she's challenging Pool. "However, that's one of the things I've been disappointed with her in, but there's many others," Gauldin said.

It's not just a clash of traditional neighborhood and pro-density values. The two predictably approach the dreaded "affordability" buzzword in completely different ways. Pool plans to work on forming a land trust in the next term so the city can maintain its own at- or below-market units. One possibility is proposing a linkage fee which would theoretically take $1 per square foot of commercial development and use that toward buying and maintaining apartment buildings.

So far, Gauldin has focused on what she describes as burdensome regulations on accessory dwelling units, an issue she calls "personal" because she and her family rent out an ADU on their property. The former elementary school teacher is also calling for more afterschool program funding to ease child-care costs for parents. It's here where Gauldin's newcomer status becomes a bit glaring. Her platform looks thin in comparison with Pool, who started her career in city politics by serving on numerous boards and commissions dating back to the Nineties. Gauldin simply doesn't have that experience – not that it's something she's shied away from, admitting she's fallen in love with city politics mostly in the last year and a half.

"The Austin of 30 years ago is not the Austin of today," said Gauldin. Résumés like Pool's mean "you're a political insider with ties to other politicians. That's who she is. She's part of this establishment. She has lots of friends, and they've put her on lots of boards and commissions. I don't have lots of political friends, because I'm not a political insider. That's the difference."

"Democracy is messy," said Pool. "And I'm OK with that, because I think the core values that I have for trying to look for the best for the city as a whole, specifically for D7, is my north star. That's what guides me." 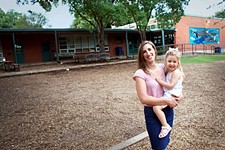