The 2014 District 4 campaign boasted no less than eight candidates, and ended in a December run-off, won by former Workers Defense Project staffer Greg Casar. Now a nearly two-year incumbent, Casar was initially challenged by a single opponent, environmental engineer Louis Herrin III, returning after winning 2.6% of the 2014 vote. Then on Monday at the deadline, professional engineer Gonzalo Camacho filed for the ballot, naming himself campaign treasurer.

"Going forward, I'm hoping we can drive more housing affordability for people of moderate incomes," Casar told the Chronicle. "And I see the coming land use revisions in the form of CodeNEXT as especially enabling that effort. We need to continue leveraging bond dollars to help underwrite more affordable housing. Overall, I will continue to work on housing integration and housing affordability."

Casar is a strong supporter of the Novem­ber Mobility Bond proposition, arguing that Austin needs to be willing to make major infrastructure investments if it hopes to keep up with population growth. He was not uncritical of the total bond package – he and colleagues initially attempted to move some funding aimed at regional state highways to more local mobility projects, and he joined a vocal push for more future mass transit – but on balance, Casar supports the bond and its intentions. "To design a bond package is a challenging process," he said, "in both planning terms and as a citywide political proposition." Despite a divided dais over the bond, Casar says he believes there is public support for making a major investment in infrastructure. "I guess we'll wait and see."

Challenger Herrin is running a minimal campaign, planning to solicit no campaign funds and rely entirely on volunteers. He is reiterating the priorities of his previous run: "streamlining city government, transportation, and city services (fire, police, water, wastewater, etc.)." He says his long experience in state environmental regulation at the Texas Commission on Environ­ment­al Quality – particularly water regulations (reclaimed water, graywater, and wastewater projects generally) – has convinced him that the city is inefficient in those areas. He hopes to be able to both improve regulations and save money.

"The city is not doing a good job with asset management," Herrin said, pointing particularly to sewer and water systems – "waiting too long to do repairs, that then cost too much to replace the assets." He said both Water Treat­ment Plant No. 4 and the new Central Library represent wasteful city spending, and that in running, he intends to "get up on a soapbox" to address those issues. He says the Mobility Bond primarily serves "special interests," and that it should have been broken into parts to give voters more choices.

Herrin said he realizes his candidacy is a long shot against a well-funded incumbent, but that "people need to give a damn and give an effort." As for the new 10-1 Council, he said they've done little to improve their own processes or even hold more efficient, accessible meetings. "They need to learn how to streamline, they need to make it easier to get permits, and they need to listen to the citizens." 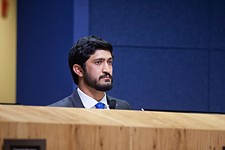