District 2: The Battle for Southeast Austin

Casey Ramos, 27, is a student, mentor, and professional boxer who tells the Chron­icle that balancing all three tasks has prepared him well for Council's rigor. He's set to graduate from St. Edward's University in the fall, but has spent the summer balancing his studies and his training (Ramos is 23-0 with six knockouts, according to boxing database BoxRec) with some preliminary campaigning around D2. Ramos hails from the Williamson Creek neighborhood and currently lives off Teri Road. He touts his connection to the youth and affinity for considering land codes as two primary selling points for his unlikely candidacy. The latter, says Ramos, comes through his schoolwork: He wrote his Capstone project on CodeNEXT, and spent much of the past year attending meetings and "learning the process." "I learned about how tangled the web is, and why it takes so long for certain buildings and businesses," he said.

Ramos directed much of his attention toward his district's incumbent. He's been critical of Garza, questioning her commitment to affordable housing and health services, two points of pride for the council member. He also characterized Garza as being somewhat of a carpetbagger to the southeast district, accusing her of moving here two years ago – an assertion that bears no fruit. (Tax records indicate Garza purchased her home in what's now District 2 in 2003. Her father co-signed on the deed. She rented the house out from 2007 through 2010 while attending law school, but moved back to the district that summer. In 2013, her father took his name off the deed, suggesting that she assumed sole ownership in May 2013.)

Garza's second opponent, Wesley Faulkner, is a 39-year-old social media strategist for the domain registrar company Namecheap who hails from the district's Springfield Village neighborhood. His focus since announcing his campaign in mid-June has been on weaving the sometimes separated District 2 into the fabric of the city. His four primary missions – leveraging Austin's tech culture, increasing diversity and density in affordable housing, solving transportation woes, and supporting "more economical choices for individuals" – read like a lineup of the problems that plague all of Austin.

"I would love to have some programs to help the schools here," he says with regard to his plans to encourage a larger tech industry in District 2. "I'd love to have some incentive programs to help people, specifically with education. Google Fiber is a good example of moving into the area and wiring up some residences and libraries. We need people engaging in tech to help focus on the area." That, in turn, would help boost D2's business profile, as well as maybe solve some transportation and food woes. Faulkner was critical of food delivery app Favor, which he mentioned by name, as well as a few local transportation network companies, for not catering specifically to the needs of D2 residents, thinking that the former's presence within the area could help solve its food desert issues while the latter could create job opportunities for those currently seeking work – another prime initiative for the candidate.

"My options to work in this area are extremely limited," he said. "There aren't many businesses here. I would love to find a way to encourage them to come to this area and set up shop. There are a lot of companies that move to Austin and maybe just don't know about [D2]. I would start with education. It's very affordable to live here. It's really close to the airport. It's next to a state park, McKinney Falls. There's tons of stuff to do here." 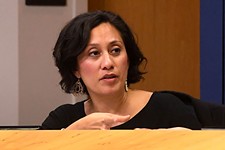