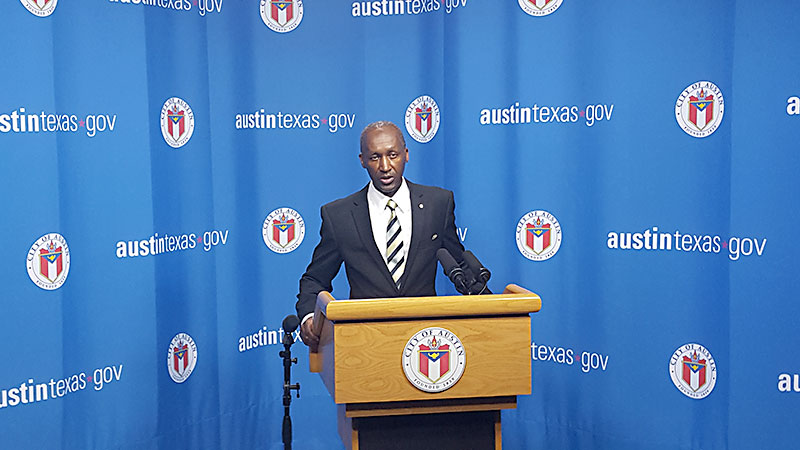 The other shoe finally dropped on City Manager Marc Ott's professional future last Friday afternoon, Aug. 12, when he accepted the post of executive director of the Interna­tional City/County Management Associ­a­tion. The selection by the ICMA board of directors was not exactly a surprise – he was nominated in late June as a finalist for the position, with a final decision expected by mid-July – but when the word finally arrived, the timing was a bit awkward. ICMA issued and posted a press release welcoming its new director simultaneously while Ott was informing Mayor Steve Adler of his appointment, and Adler quickly released a congratulatory statement while a press conference was being hastily assembled in City Hall's media room.

"I want to thank Marc Ott for a decade of service and dedication to Austin," said the mayor. "Under his management, Austin has grown into one of the most vibrant and successful cities in the world. That's huge, and he deserves a lot of credit." Speaking to reporters a bit later, Ott said his decision to leave after nearly nine years as Austin's city manager was not an easy one, but called the new position "a unique opportunity" to have an influence on city management practices not only in the United States but all over the world. He credited his Austin experience as preparing him to take on the international position, and said he intended to maintain contacts here – perhaps even maintaining a residence – after he and his family relocate to Washington, D.C.

"This wasn't an easy decision. I've dedicated myself to the residents and employees of Austin for almost nine years," said Ott. "But this is a unique opportunity – one that allows me to apply 30 years of experience toward advancing the profession and bettering communities around the world. My experience here in Austin has prepared me well for this new challenge."

Ott will remain as city manager until Oct. 30. ICMA Board President Patricia Martel announced his hiring: "Marc brings to ICMA nearly 30 years of distinguished service in the local government management profession and has been a member of ICMA throughout his career. ... In making this appointment, following a yearlong competitive search, the board selected a candidate who reflects the integrity, professionalism, and commitment to service of our entire organization, which has been a hallmark of ICMA's leadership."

Ott's tenure in Austin, beginning in 2008, has had its share of controversy – most recently after he publicly reprimanded Austin Police Chief Art Acevedo – and a small local advocacy group ("Manage Austin Better," www.manageatxbetter.com) had formed to press for a change. Several council members had campaigned in 2014 in part on replacing Ott, and some observers thought Council might use its long-delayed June personnel review to dismiss him. Instead, a few days after he announced his candidacy for the ICMA job, he received a substantial raise and praise from the dais.

Adler and other council members again praised Ott, saying they want to move quickly to appoint an interim manager and begin a nationwide search for a permanent replacement. "Austin's loss is also an opportunity to find the right leadership to guide our city," said Adler, "as we deal with affordability and mobility."

Asked Friday if he thought the city had made significant progress in addressing historical segregation and economic inequality, Ott recalled the city's September 2015 public forum called "The Spirit of East Austin." "We all stood up one day on a Saturday and we in effect put our hands on our hearts and said that this time, we were committed to making a difference. And everybody in Austin ... needs to be committed to the intent of what was expressed on that Saturday morning."