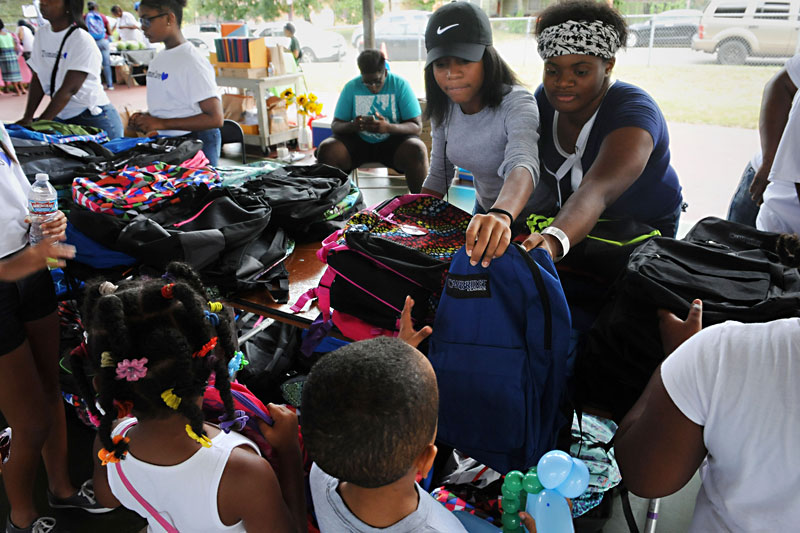 R.O.S.E.S. (Reaching Out Supporting Every Sister) held its sixth annual Back-to-School Drive on Aug. 13 at Alamo Park. Since its inception, the group has handed out backpacks and school supplies to more than 500 students. (Photo by John Anderson)

City Council's full agenda today (Aug. 18) includes the third reading of the Mobility Bond proposition, public hearings on the FY 2017 budget, and the usual glut of contracts and contentions (see "Council Reaches Consensus on Mobility Bond" and "City Council Clashes Over 2017 Budget") – even as City Manager Marc Ott announced he is in fact leaving for another job (see "Ott Moves On").

Stakeholders and Austin Energy have reportedly reached agreement on a new AE rate structure, including cuts totaling $218 million and including all customer tiers – subject to Council approval, and a likely challenge from some commercial customers who still don't like the deal.

The City of Austin announced four candidates for the new Chief Equity Officer position, an office meant to address disparity gaps and ensure equal access to the city's services. The candidates, including Google Fiber's Parisa Fatehi-Weeks and the mayor's education coordinator Kazique Prince, will be introduced at a town hall meeting on Thu., Aug. 25 from 6:30-8:30pm at Palmer Events Center.

Texas' maternal mortality rate doubled between 2010 and 2012 to "levels not seen in other U.S. states," according to a recent study published in the journal Obstetrics & Gynecology. While the state slashed family planning funding in 2011, researchers say that doesn't fully account for the death rate and they're in the process of further analyzing the situation.

The Drug Enforcement Agency declined to recognize the many medical benefits of marijuana last Thursday when it denied two separate petitions that sought to change cannabis' federal classification to something other than a Sched­ule 1 drug (a classification reserved for drugs with no medical use and a high potential for abuse).