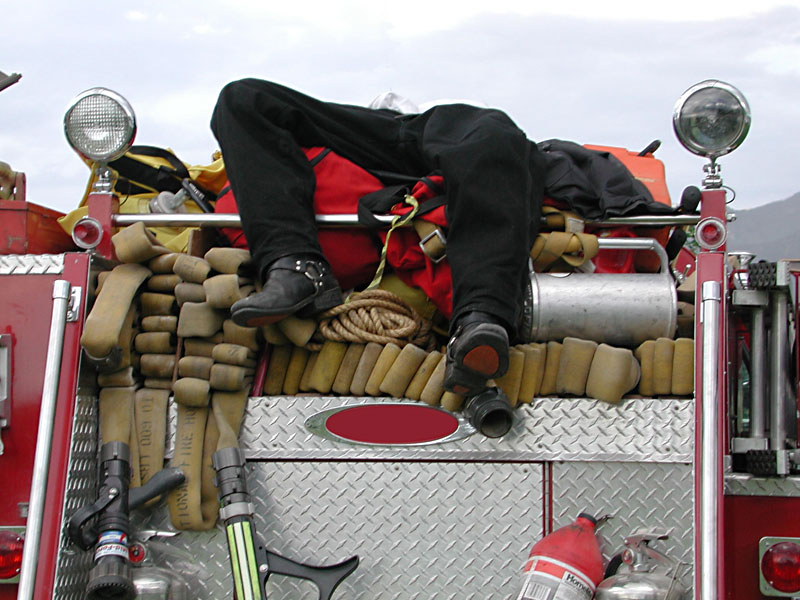 The past six weeks have seen two sworn employees of the Austin Fire Department suspended 60 days for drinking and driving. In an odd twist, in both cases the firefighters were arrested while purchasing food at fast-food restaurants.

Eddie Hernandez, a firefighter with the city since 2008, got picked up for his DWI at an In-N-Out Burger in North Austin on May 1. Hernandez was with a friend and fell asleep while waiting in line at the restaurant's drive-through. He was awakened by an In-N-Out staff member, then told to go wait in the parking lot for his order. A manager called 911; responding officers called DWI Highway Enforcement to run a field sobriety test, which Hernandez failed. He was booked into Travis County Jail with a blood alcohol content level of .206, well over the state-prescribed limit of .08. Word of Hernandez's suspension went public on June 27, through a memo issued to Civil Service by Austin Fire Chief Rhoda Mae Kerr. He'll remain off AFD trucks until Aug. 28, at which point he'll begin a probationary period of one year.

On Aug. 4, Kerr submitted a similar suspension, this time to Fire Specialist Blake Mashburn. The 12-year veteran was eating in his parked car at a Sonic Drive-In in Cedar Park when police from CPPD pulled up and told him they'd received a complaint about his reckless driving prior to his arrival at the Sonic. Kerr said Mashburn refused a field sobriety test and got transported down to TCJ, where he registered a blood alcohol content level of .126. His suspension continues through Oct. 4. As with Hernandez, Mashburn will submit to counseling and rehab, and begin a probationary period of one year upon his return to duty.

A spike in DWI arrests of local firefighters (drinking and driving led to 38% of the department's suspensions between Feb. 2009 and Oct. 2013) encouraged Kerr to increase the standard duration of suspensions from 10 to 15 days in Nov. 2013. The chief indefinitely suspended one of her longest-tenured firefighters in July 2014 when she terminated 29-year veteran Mark Madison. Other instances since the Nov. 2013 memo suggest that 60-day suspensions for DWIs will become the norm at AFD.