Case headed toward trial in December

United States Federal Judge Sam Sparks issued an order Thursday in Caroline Callaway's lawsuit against the city of Austin, Travis County, and Austin Police Officers Patrick Oborski and Adam Johnson. In response to the four defendants' joint motion for summary judgment, the order discards a few of Callaway's charges while also allowing the case to move forward. None of the defendants were absolved of charges.

The order comes in the wake of an April 14 hearing on the merits of Callaway's case. The 25-year-old filed suit in Feb. 2015 against the city, county, aforementioned officers, and various other officers with both APD and the Travis County Sheriff's Office (each of whom have since had the charges against them terminated), after a DWI arrest and ensuing blood draw and booking at Travis County Jail left Callaway feeling that authorities had violated her right to be free from an unlawful search and seizure. Remaining on Sparks' desk as of April were charges that Johnson, who assisted Oborski with Callaway's arrest, had used excessive force when he "violently jerked" Callaway's handcuffs upward (injuring her wrist and causing what doctors consider to be permanent nerve damage), as well as charges related to the blood draw process Callaway faced when brought into central booking. Callaway argued she was unnecessarily and forcefully placed in a restraint chair; incurred an unwarranted chokehold; and got strapped with an incorrectly fastened spit-guard that left her struggling to breathe.

Sparks dismissed Monell charges that the city and county had established unconstitutional practices with respect to the blood drawing process – namely, that putting someone into a restraint chair was excessive in nature – but found cause to continue hearing Callaway's argument about improper use of the spit-guard and chokehold (which the county prohibits in practice). Sparks also ruled in Callaway's favor that the court should continue to question whether Johnson and Oborski knowingly did nothing when county officials allegedly used excessive force on Callaway in order to secure her blood sample, and whether Johnson used excessive force during Callaway's arrest. "It should have been obvious to Sergeant Johnson that people who pose no safety risk to the police have a right to be free from gratuitous violence during arrest," Sparks wrote.

The order points Callaway's case toward a trial in December, unless the city and county choose to settle out of court beforehand. 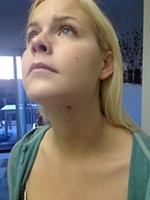