"Time is short" to implement a replacement 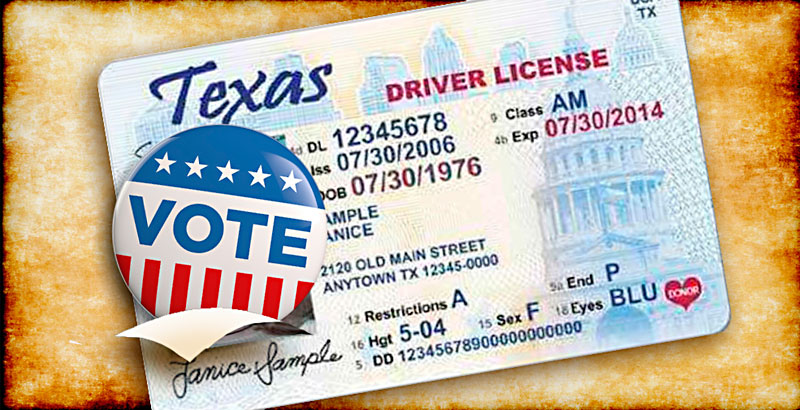 Voter ID in Texas violates the Voting Rights Act, and the state must develop new rules before the November election. That was the definitive statement in a majority opinion, nine to six, issued by the 5th Circuit Court of Appeals last week. But don't put your driver's license away quite yet. While the court has ruled that the current state rules are in the wrong, no one knows what the replacement rules will look like. Travis County Clerk Dana DeBeauvoir said, "We don't know very much. The takeaway is that we don't know what to do."

The core issue was the strict photo ID requirements passed in 2011's Senate Bill 14, which have been facing legal challenges for half a decade. In 2012, the Justice Department blocked implementation of the rules, and then the state lost its first major defense in 2014, when U.S. District Judge Nelva Gonzales Ramos found that the law did indeed suppress minority voters. The majority opinion of the 5th Circuit's 15-member appeals bench upheld the core ruling of the lower court, and instructed it to create interim rules in time for the November 8 general election.

This is the latest ruling in a case that has seen the law bounce as far as the U.S. Supreme Court and back down again. So for now, when it comes to the upcoming Novem­ber election, the court actually rejected two of the claims made by the plaintiffs (a diverse group including the League of United Latin American Citizens and Congressman Marc Veasey, D-Ft. Worth), and upheld a third.

Normally, scoring one out of three is pretty poor, but in this case the plaintiffs have plenty of reasons to be happy. The appeals court found that it's not just that the current law has left over 600,000 registered voters in Texas without the right documentation to exercise their constitutional right: it's that the rules have a disproportionate impact on minority voters. In total, 4.5% of all registered voters in the state lack a suitable government-issued photo ID; however, that figure drops to 2% for white residents, rises to 6% for Hispanic residents, and a startling 8% among African-Americans voters. Moreover, the ruling castigated the state for its "lackluster educational efforts" in informing voters on what they needed.

But Veasey et al. didn't win on every point. While the court agreed that the bill was discriminatory in effect, that was not proven to be the intent of its authors. However, that's a more mixed decision than it sounds, as the court actually remanded that section back down to the lower court for further consideration. The court also rejected the idea that the rules were a de facto poll tax, because the main form of ID listed required a fee. Here, the court ruled that, since the state issues a free Election Identification Certi­ficate (EIC), that argument held no water. Judge Ramos had sided with the plaintiffs, because the birth certificate required to get an EIC still costs money. DeBeauvoir echoed that sentiment, saying that EICs are "free, except that it's not free because you still have to have your background documentation." Moreover, she noted that "a piddly amount" of EICs had been issued to Travis County voters, and that's worrisome, because voters in the area have much access to issuing locations. Many rural DPS stations have been closed over the last few years, "so you can't even get to a location without driving quite a distance."

So what now? The appeals bench has remanded the case back to the trial court, and it will be that lower court that fashions at least the interim replacement rules. However, the court may already have tipped its hand. There is a special election in San Antonio's Texas House District 120 on Aug. 2, for which Attorney General Ken Paxton and the plaintiffs in the original suit have agreed to a one-off set of rules. In addition to the list of valid IDs under SB 14, voters will be able to use alternative IDs, such as voter registration cards or utility bills, and then sign an affidavit allowing them to use a provisional ballot.

The court could conceivably use that as the statewide fix, but DeBeauvoir said she had heard discussion in some quarters of adopting what is known as the Indiana plan. Like Texas, Indiana requires a photo ID to vote, but the list of eligible documents is much longer, and includes options like student IDs, and an affidavit bypass as has been approved for HD 120. Significantly, it has already passed muster before the U.S. Supreme Court, so adopting it could bring a hasty end to Texas' never-ending litigation.

The more pressing question for DeBeau­voir and her fellow county clerks is when the interim rules will be decided. If the court is to fashion new processes in time for November, "time is short," the appeals justices wrote. Early voting for the Nov. 8 election begins on Oct. 24, but with training of election judges scheduled to begin in September, DeBeauvoir said, "We really need the trial court to give us that advice by Labor Day."