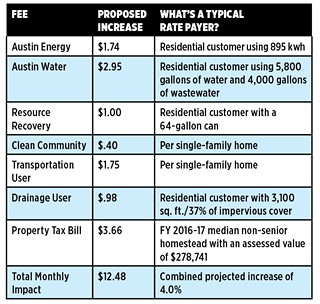 Proposed Monthly Fee and Tax Increases Include the above

On Wednesday morning, a somewhat diminished City Council heard the formal presentation of City Manager Marc Ott's FY 2017 city budget. (Mayor Steve Adler and Council Members Ann Kitchen, Leslie Pool, and Sheri Gallo were out of town.) There were no major surprises – the big numbers haven't shifted much from the April forecasts, and the staff budget even manages a bit of wiggle room for at least a few of Council's wish-list priorities.

Much of that credit goes to Austin's continuing growth, reflected in $3.1 billion of new development and another double-digit percentage spike (13.7%) in property values, following 2014 (11%) and 2015 (12%). That means that both the All Funds budget (which includes the "enterprise" self-funding departments) and the General Fund (Operating Expense) budget have increased from FY 2016: All Funds from $3.6 billion to $3.7 billion, and the General Fund from $913.2 million to $969.2 million (an increase of $56 million). The sales tax revenue to help fund those changes is not so bullish: Projected at a 5.6% increase, thus far it's been arriving at a full point lower, although the budgeteers still expect it to reach 5.0% (nearly the 10-year average).

What can that prosperity buy for new Council initiatives?

Ott reported that he asked all departments to scrub their budgets to help fund other Council priorities, among them: addressing homelessness, mobility improvements, housing supply and affordability, density/workforce housing, creating development east of 183. That created room for a group of proposals:

Additional increases and expenditures are itemized throughout the staff-proposed budget – all of which are subject to Council approval over the next month (and which the Chronicle will be reporting in due course). Based on the current projections, what will all these initiatives cost a "typical" homeowner (or indirectly, the renting majority through their rent)? See the chart above. – Michael King Overall, Where Are We Spending Our Money?

The percentages of expenditures in the General Fund budget include: