City Council will weigh the cost of sobriety 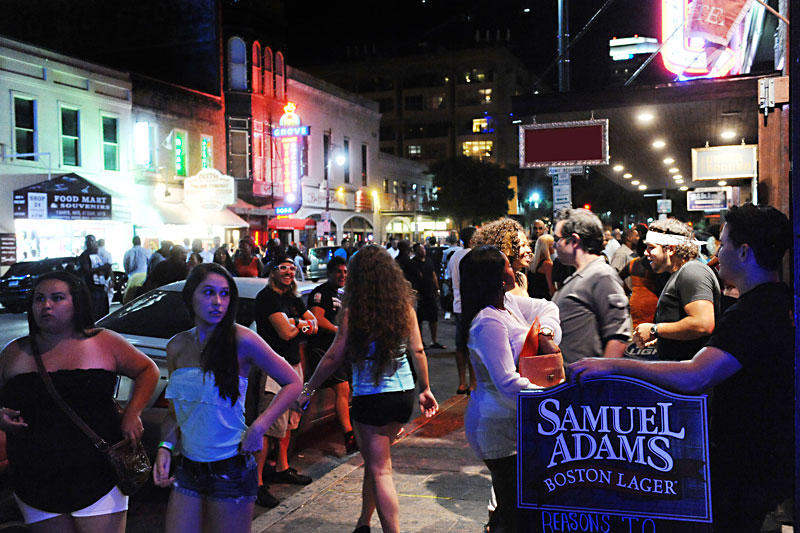 Sixth Street has helped Austin earn its reputation as a hard-drinking city. (Photo by Jana Birchum)

Austin is a party town. After all, the city has been named one of the top drunkest cities on more than one occasion. The entertainment district, the Drag, the University of Texas, Sixth Street, and the city's festival circuit have all helped Austin earn its drinking reputation. And there's a burgeoning craft beer industry brewing.

The city's drinking culture also has a dark side. Texas state data show the prevalence of binge drinking in Austin has been significantly higher than the Texas and U.S. averages. And city research shows that after a short dip, public intoxication arrests have begun to climb among Austin/Travis County residents, who accounted for 75% of those booked and charged in 2014. The majority of public intoxication arrests are of one-time offenders.

"We have a very vibrant economy in which alcohol plays a major role," Travis County Judge Sarah Eckhardt told the Chron­icle. "There's no question that a large driver of our criminal justice activity is fueled by alcohol and substance addiction."

The city and county have looked at establishing a sobriety center to help curb rising public intoxication arrests since 2002. Eckhardt said a sobriety center, where people can sober up without arrest, would be a more "meaningful response" to addiction. It would help keep people from cycling through the criminal justice and legal system. As of 2015, six cities have established sobering centers. Come late 2017, Austin will be the seventh.

But supporters of the city-county undertaking are concerned that the extra 2% homestead exemption the city recently adopted may have thrown a wrench in the long-awaited plans.

Mayor Pro Tem Kathie Tovo noted that the added 2% exemption, approved in a special called meeting June 29, will cost the city $3.8 million – on top of the $11.5 million already stripped from the upcoming budget because of last year's 6% homestead exemption. Tovo doesn't have a "clear sense" of how this loss will be balanced in what officials consider a "tight budget year." Services would have to be cut, she said. Sacrifices will have to be made. And, depending on how much is allotted to the project in the office of the city manager's budget proposal, the sobriety center may be a line item that requires outside funding, she added. Tovo and the rest of City Council won't lay eyes on the budget proposal until next week, though, when council members convene Wednesday, July 27, for a budget work session meeting.

"We'll have to be really creative to figure out ways to fund [the sobriety center]," said Tovo, who has worked on the project for four years. "It'll be a challenge."

But Tovo is confident the sobriety center will move forward regardless of budget constraints. The facility is expected to open late next year after the Travis County Medical Examiner's Office vacates 1213 Sabine Street and it's retrofitted for use. It will cost about $1.45 million to operate the first year. Travis County would front most of the bill, shelling out $1,074,515; the city of Austin is expected to dedicate less than $380,000. Once the center is fully operational, the city will pay for the bulk of the annual cost – $1,724,540 to the county's $437,000.

Comparatively, the Austin Police Depart­ment and the Travis County Sheriff's Office could spend anywhere between $935,000 to over $1 million a year on public intoxication arrests, according to an implementation plan released by the Sobriety Center Plan­ning Committee last April. Seton Health­care Family, another stakeholder in the project, estimated the direct costs associated with emergency room visits by publicly intoxicated people ranged between $1.1 million and $2.6 million.

"We anticipate we will realize pretty substantial [savings] from healing people at the sobriety center," Tovo told the Chronicle.

Despite overwhelming support, not everyone's on board. District 6 Council Member Don Zimmerman voted against the interlocal agreement that establishes a local government corporation to oversee the sobriety center. He claimed he was "not seeing" the savings that would justify over $1.5 million in new spending. That money could have gone to the Travis County Emergency Service District 4 merger, he said at the June 23 session, or "funding core services like APD."

For APD, though, the savings is not only in money but also in time. A police officer who arrests someone for public intoxication will have to stay with the offender for three or four hours while they go through the booking process. That means less time patrolling the streets, said Assistant Chief Jason Dusterhoft. And with a shortage of over 170 police officers, he added, four hours is valuable time. "Every single hour means a lot," he said. With the sobriety center, the officer can drop off the offender and be back on foot in 15 minutes. "There's a bigger safety factor where we'll have more officers on the street."

The sobriety center plan gives APD the authority to decide who is brought to the facility and who goes to jail. People who are only guilty of public intoxication are eligible to go to the center. People committing other crimes while intoxicated – say, physical assault – would be booked Downtown. The police's power of discretion is precarious, though, considering the state's vague public intoxication law, which doesn't have an objective standard for proof of public drunkenness – and has led to problematic policing in the past. But to make the sobriety center work, "you really have to have the buy-in from the police department," said Andy Brown, the former chair of the Sobriety Center Planning Committee and now a member of the center's Austin-Travis County Intergovernmental Working Group.

The IWG will recommend nominees for the local government corporation that will oversee the center's operations and staffing decisions, as well as assist with fundraising. Nine members will comprise the entity – four from the city, four from the county, and one joint appointee. The city has already posted its call for board applicants. Tovo said she expects city nominations to be made and affirmed by the middle of next month. The board "would lay the groundwork going forward," she said.

Brown and other committee members, including Eckhardt and Tovo, spent a year researching sobriety center models and strategies before making recommendations last April. They found the Houston Recovery Center, established in 2013, to be the most cost-effective, simple, and successful model to copy, said Eckhardt, who became involved in the project in 2011 while a Travis County commissioner. That center has diverted 18,327 people from jail as of May, according to its website. The center also found that public intoxication arrests have decreased by more than 75% since 2013. Eckhardt and others expect Austin's sobriety center to return much of the same results.

"Treating substance addiction as a public health issue rather than a public safety issue is showing real dividends for the person suffering the addiction, as well as the community at large," Eckhardt said. "It just seems to be so much more effective."

A version of this article appeared in print on July 22, 2016 with the headline: The Cost of Sobriety