Did the City Jump Into Bed With Taser Too Fast? 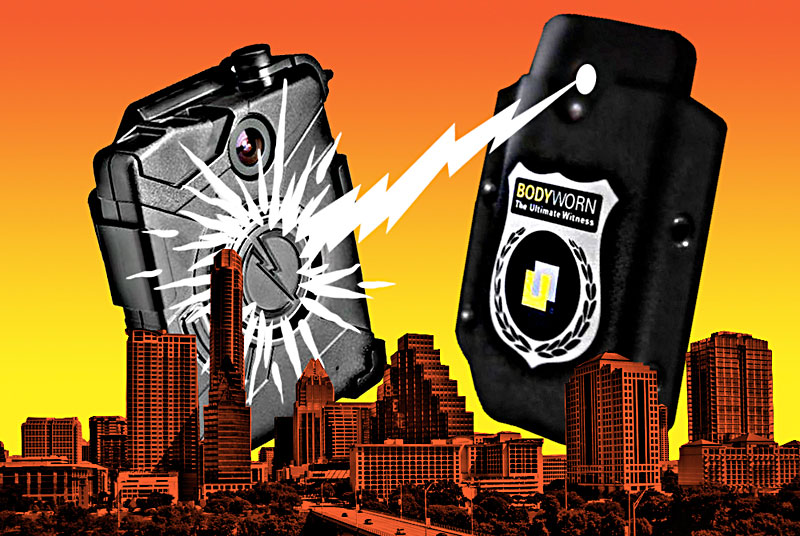 At the moment, and at least until Aug. 1, when a hearing is set in Travis County's 126th District Court, the city of Austin and anybody working under City Manager Marc Ott (including both the purchasing and police departments) remain barred from working with selected body camera outfitter Taser International on preparations for the imminent implementation of cameras on 500 patrol officers. The holdup went into place last Thursday, July 14, when Judge Gisela Triana granted a temporary restraining order to Utility Associates, Inc. in response to a lawsuit the company filed July 8.

Utility's case, as laid out in a 17-page suit seeking to drive a wedge between Taser and the city (and ultimately win the plaintiffs a newly executed contract with COA), is rooted in allegations that the city "engaged in an illegal and improper non-competitive bidding process" when it chose to award the service project for body cameras to the Arizona-based police accessory organization, which in recent months has become the Google of the body camera industry. (The New York Times ran a fawning feature, "Taser International Dominates the Police Body Camera Market," just last week.) The suit contends that city Purchasing "either misapplied, or failed to apply," solicitation instructions and terms and conditions in seven different instances. On spec, the company is arguing, the city elected to go with a less capable, more expensive product, and during the review process chose not to give any of the nine competing offers a full-scale test of their products.

Among the oversights, Utility is arguing that Taser's proposed cameras do not include a mobile viewing device; aren't capable of being managed with a single management console; are incapable of encrypting data from end-to-end in a manner which prohibits the service provider from accessing the video; cannot temporarily cache video prior to transmitting it onto cloud storage; cannot identify which officer was wearing a particular camera; cannot capture still photographs; and don't include autofocus capabilities. The company also suspects city favoritism in the "allegedly unrelated" $5 million iPhone purchase for patrolling officers that Council approved in June subsequent to the approval of the Taser contract, suggesting that the two purchases ($12.2 million for the camera contract and $5 million for the iPhones) exceeded the $12.2 million limit prescribed by city Purchasing.

Those contentions comprised the bulk of two protests filed by Utility against the city's in response to its decision to grant Taser the contract. In response to the first protest, an eight-page complaint filed in late May, city Purchasing Officer James Scarboro maintained that Taser met the requirements laid out in the city's request for proposal (RFP) and did not exceed the $12.2 million budget. "While these items are related to the extent that the body cameras are compatible with the mobile phones, the specific mobile phones under item no. 31 [from the May 19 meeting of City Council] are unrelated to Taser's proposal," wrote Scarboro. He said the RFP "did not include a requirement for mobile phones or services" and that the "purchase from AT&T is a separate contract which could be used to enhance the functionality of the body cameras, along with multiple other applications" potentially used by APD. (The phones, which will be subject to state open record laws, could be used by cops for Googling, mapping, emailing, calendaring, and communication.)

Utility's legal battle in Austin follows a lawsuit filed against the city of Atlanta in January and a protest logged with the city of San Jose, Calif., in May. In both cases, according to the complaints, the company argued that the cities' respective purchasing departments used tunnel vision in their selection process. Any of the three contracts (Austin included) would have been the largest to be awarded to Utility, which currently contracts with 10 different agencies, including the Bexar County Sheriff's Office in Texas, Atlanta Department of Corrections, Metro Atlanta Rapid Transit Authority (MARTA) Police Department, and police departments in seven smaller towns, mostly outside Utility's hometown, Atlanta. Locally, the company seems to have an ally in District 6 Council Member Don Zimmerman – who's reportedly been meeting with company representatives and was publicly skeptical of city Purchasing's decision during Council meetings – but declined to speak about their lawsuit or problems with the city's selection process with the Chronicle, a primary offering on numerous occasions that multiple company representatives had no time to talk. The city's standing policy is to not comment on open cases.

Meanwhile, representatives from APD continue to meet with community activists and stakeholders to finalize policies for use of the cameras and the degree to which recorded video will be made available to the public. Anecdotally, the policies as they've stood have been a bit bare-bones; both ACLU of Texas' Matt Simpson and Austin Justice Coalition co-founder Fatima Mann expressed concern about the remarkable amount of specific situations that could arise during an incident's recording or an individual's efforts to both obtain that footage or (in the case that they're the subject of the video) keep the clip from becoming public. Simpson said during a recent Public Safety Commission meeting that recent policy drafts "show a lot of improvement" with regards to privacy issues and APD's efforts to educate the public on body-worn camera policies. However, there remains some divide about when cops will and won't turn on their cameras during incidents – particularly in the cases of sexual assault and domestic violence. The department has long held that its policies are bound tightly to Senate Bill 158, the law which passed last legislative session and lays out the blueprint for body-camera programs within the state; however indications from both city legal and a representative of the District Attorney's suggest that APD has room to interpret the law's language.

"Lots of stuff stakeholders wanted was considered legal by the D.A. and city legal, but APD said that was not how they'd done it in the past, so they didn't want to do it like that," explained Mann. "I understand that things are changing, but so are the technologies. The policies and things need to start changing with that. That was a really big concern, that the status quo is what our higher-ups seem to be okay with. That's great, but the status quo doesn't help everyone, which is the point."

APD remains on course for the deployment of its first 500 cameras in September, unless Utility manages to extend the current holdup at the hearing planned for early August. 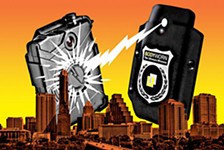 What’s the Future of Body Cameras in Austin?
That’s up to the courts for now