Another day, another shooting, another memorial

We flood communities with so many guns that it is easier for a teenager to buy a Glock than get his hands on a computer, or even a book. – President Barack Obama, speaking at the memorial for five murdered Dallas police officers

With the shadows of Baton Rouge, St. Paul, and Dallas still hanging over our communal heads, it's a good moment for one of this column's periodic checks on the Gun Violence Archive (www.gunviolencearchive.org), the D.C.-based database of U.S. gun violence incidents created to "inform and assist those engaged in discussions and activities concerning gun violence." Your first visit to the GVA can be a little overwhelming (and by the time you read this column, most or all of the numbers cited here will be revised upward). Just noting a few 2016 highlights, the Archive had recorded (as of July 13) 28,255 gun violence incidents this year: 7,285 deaths, more than 15,000 injuries, 182 "mass shootings" (four or more people injured or killed). Among the dead or injured were 324 children (age 11 or younger), and 1,581 teens (12-17).

That was the only incident that received widespread media coverage; the other 81 deaths garnered only local publicity, a few more trickles in the drip, drip, drip of daily gun violence.

That's the immediate context in which President Obama made his memorial speech in Dallas Tuesday, exhorting his audience for hope in the midst of despair. "But Dallas," he told them, "I'm here to say we must reject such despair. I'm here to insist that we are not as divided as we seem. And I know that because I know America." He was hardly glib about the prospects – he had "spoken at too many of these memorials" to be blandly optimistic about the aftermath, in which most of us quickly slip back into predictable patterns of thought and behavior.

Looking at that 72-hour list of shootings following the outrage in Dallas, there is little reason to expect a different pattern this time.

The president called for all of us to "find the will to make change," and to oppose violence, first, by seeing ourselves in each other: "Can we find the character, as Americans, to open our hearts to each other?" It's a fundamentally religious appeal, and he cited Ezekiel (36:26): "I will remove from you your heart of stone and give you a heart of flesh."

Readers who are devout will find more comfort in those words than I can muster this afternoon. The short-term measure of the effects of Obama's rhetorical question is reflected in the immediate reaction of his political enemies, who reflexively denounced him as too hard on the police and too easy on Black Lives Matter.

I was more persuaded by his practical judgments, most specifically, "We ask the police to do too much, and we ask too little of ourselves." Because as a political community we are unwilling to invest in the kinds of public resources that actually reduce violence, we expect the police to confine violence to already beleaguered neighborhoods while simultaneously acting as mental health counselors, social workers, public educators, surrogate parents, anti-poverty volunteers, first responders to any and all emergencies – emergencies for which, over long decades, we have created the sustaining conditions.

And then, as Obama also noted, we flood our communities with guns, and have the gall to feign surprise and outrage when the guns are used, for everyday, ordinary violence. "Will this most recent massacre finally make a difference, and trigger sufficient public pressure for real change?" Unlike the president, I see very little reason to think so. Guns in 2018: The Carnage Continues
A look at the Gun Violence Archive findings for the year 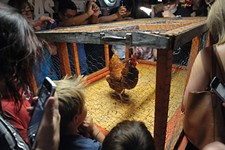