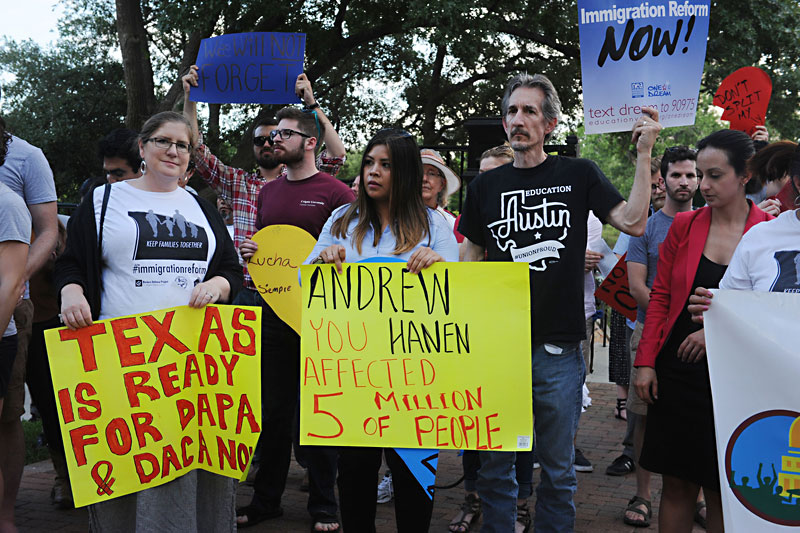 The Workers Defense Project held a demo on Thu., June 23, at the Governor's Mansion to protest the decision. (Photo by John Anderson)

Luis Ortega says he and his family will be forced to continue to live in fear following last Thursday's disappointing U.S. Supreme Court deadlock on a Texas-based immigration case. The 4-4 split vote in United States v. Texas effectively blocked an opportunity to shield up to 5 million undocumented immigrants – including more than 700,000 Texans – from deportation and allow them to secure work permits. The 21-year-old Austin college student's parents, who have lived in the U.S. for 16 years, would have benefited from the plan. Instead, his family is left insecure, heartbroken, and anxious from the SCOTUS stalemate.

"Immigrant families are constantly under attack and living in fear in Texas," Ortega told the Chronicle. "My dad travels all over the state for his job [as a construction worker] and my sister and I are always afraid he won't come back. At any given point he could be pulled over and deported, separating our family."

After yielding to pressure from immigrant rights activists in 2014, President Barack Obama issued an executive order to expand protections for undocumented immigrants. He called to widen eligibility for participation in the existing Deferred Action for Childhood Arrivals program (DACA) and create the Deferred Action for Parents of Americans and Lawful Perma­nent Residents program (DAPA), which would allow undocumented immigrants who are parents of U.S. citizens or legal residents (and have lived in the U.S. since at least 2010) to apply for work permits if they pass background checks.

While serving as attorney general, Gov. Greg Abbott – in his quest to sue the Obama administration as often as possible – led a 25-state lawsuit to prevent the order from taking effect. Last February, U.S. District Judge Andrew Hanen of Brownsville blocked Obama's executive order, and the 5th Circuit Court of Appeals upheld the injunction in Novem­ber. (Texas officials strategically filed the suit in Hanen's district because the judge is known for being a critic of Obama's immigration policy.) The Justice Department then appealed to the high court. The 4-4 tie allows the 5th Circuit ruling that struck down the protections to stand, and sends the case back to Hanen's court. Shortly after the ruling, Obama called the SCOTUS decision "heartbreaking for the millions of immigrants who have made their lives here."

Undocumented immigrants must now continue to see their futures hang in limbo. "I'm heartbroken over [the] decision for our members, families, and communities who were really hopeful that this ruling could provide some reprieve from the anxiety that they live with on a constant basis," Jose P. Garza, executive director of the Workers Defense Project, told the Chronicle.

The immigrant-rights group says 750,000 Texans and some 42,000 Travis County residents are affected by the decision. "It is impossible to articulate the devastating impact this has on working people in Texas," said Garza. "They are incredibly disappointed and crushed by the decision. But our resolve and determination remain unbreakable – the fight is not over." Garza pointed to not just the benefit the order would have had on immigrant families in Texas but also the economic impact – if the executive order were allowed to move forward, it would increase the state's GDP by at least $30 billion. "Our governor has not only jeopardized immigrant families, but he's also doing harm to the Texas economy."

While Texas Republican officials, such as Attorney General Ken Paxton and U.S. Sen. Ted Cruz, expectedly cheered the SCOTUS decision as a rebuke of Obama's "amnesty," Democrats expressed deep disappointment and a renewed call for comprehensive immigration reform nationally and within Texas. "With a one-sentence ruling, the Supreme Court deferred the dreams of millions of families," said Rep. Eddie Rodri­guez of Austin. "As the vice chair of the Mexican American Legis­lat­ive Caucus, I will continue working with my colleagues in the Texas House to send DREAMers to school, to stop bad sanctuary city legislation, and to ensure a good education and opportunity for all."