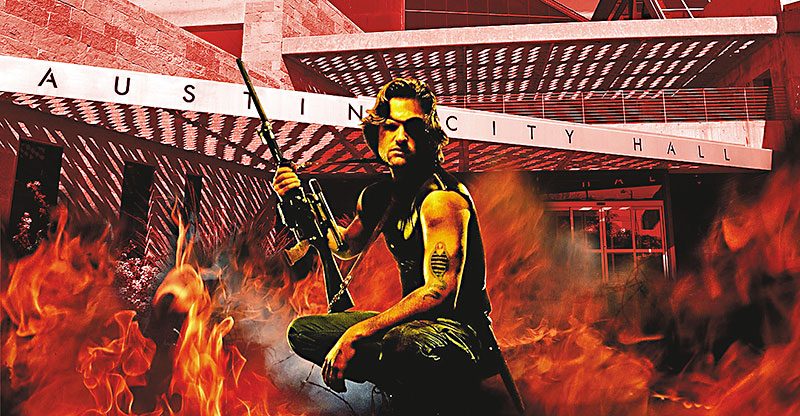 Actually, after last Thursday's marathon meeting – 103 items (with a few lagniappes) lasting until 3am – City Council didn't actually manage to begin their annual summer break. They were required to hold a special-called meeting this week (Wednesday, June 29) in order to confirm their far-from-unanimous decision to increase the property tax homestead exemption. The increase – 2% added to last year's 6% – garnered only six votes last Thursday, meaning it couldn't be passed on all three readings. Hence yesterday's special session, a sequel to Thursday's "special-session-within-the-regular-session" necessitated by a July 1 state filing deadline.

Devout Chronicle readers might recall last year's debate over the exemption, which most benefits the wealthiest homeowners and renters not at all ("Council Adopts 6% Exemption," June 5, 2015). Nevertheless, proponents see it as a way to provide modest returns to property owners, and the seven council members who voted for it last year – Mayor Steve Adler, and CMs Sabino Renteria, Ann Kitchen, Don Zimmerman, Leslie Pool, Ellen Troxclair, and Sheri Gallo – did so with the explicit intention of expanding it to the state limit of 20% over four years. But this year's budget, still in preparation, looks to be tighter than last year's – plenty of new expenses yet unallocated – and budget staffers informed Council that, at the rollback tax rate increase (the maximum allowed without voter approval) they are currently estimating about $2 million wiggle-room's worth of surplus.

Undaunted, Troxclair initially moved to adopt a full 14% addition – for which Deputy Chief Financial Officer Ed Van Eenoo estimated a $25 million budget hit. That failed, 3-8, as did Troxclair's motion to add 4% (costing $7.7 million). Despite pleas from Gallo and Zimmerman that $7.7 million in cuts would be readily absorbed, that motion lost 3-7-1 (Ora Houston abstaining). Finally, at 2% – and a cost of $3.8 million – the exemption won six votes, losing only Renteria from last year's 7-4 majority. There followed a brief flurry on the dais as Adler consulted with the lawyers about what to do – eventually concluding there would have to be yet another special-called meeting.

The exemption was not unexpected – the mayor repeated his campaign pitch that cutting a regressive tax is progressive, persuading some of his colleagues. But 2% is not 6%, and the diminished vote reflected diminished enthusiasm, in part because the 10-1 Council has learned (as it had not yet last summer) how difficult it is to balance the city's operations budget, especially in June.

There was also a curious contrast with an earlier decision, much awaited, concerning City Manager Marc Ott's annual review. After much speculation about Ott being on politically thin ice (and an open call for his dismissal by CM Zimmerman), with little fanfare, Council voted to give the city manager a 7.6% "market rate" raise (to $309,441). The vote was 7-1-3, with Zimmerman voting nay and Garza, Troxclair, and Gallo abstaining, on the grounds that the decision should wait for budget decisions on all city employees – a caution that Troxclair and Gallo did not entertain on the homestead exemption.

Adler and Houston were effusive in their praise for Ott, with the mayor saying Austin "is the envy of virtually every city I visit ... [and] I think that the CEO of the city is in large measure responsible for that." No doubt the executive session personnel review (an all-day affair last Wednesday) featured more disputation, but the politics lesson here might well be: The best thing to happen to Ott was getting Zimmerman for an enemy.

Ott's specific future remains in doubt, as he's a finalist for the position of executive director of the International City/County Management Association. Sometime next month, we should learn whether this melodrama has a climax. In other actions last week, Council:

• Adopted what Adler later called a "pretty cutting edge" ordinance to restrict "dark [unsourced] money" in municipal elections – intended to disclose unidentified donations like those that slipped through the cracks in 2014.

• Despite some dispute over the contract details, approved the purchase of body cameras and associated smartphones for Austin Police Department officers, with the intention of continuing the development of policies on use and release of video material.

• Adopted specific sanctions to accompany fingerprinting and related requirements for transportation network companies, in order to (as the mayor later put it) "better complete the circle with respect to biometric checklinks." This was the piece of the TNC regs never quite resolved in earlier discussions – how best to actually enforce the regulations.

• Approved on third reading a drivers' taxi co-op to compete with existing franchises – another response to the surface transportation issue, with the hope that the drivers can compete with the TNCs as well as the existing cab franchises.

• Took steps to establish a "sobriety center" to decriminalize public intoxication cases, via a partnership with Travis County (whose Commissioners Court acted this week to ratify the agreement). Mayor Pro Tem Kathie Tovo suggested that the center initiative might be one casualty of the budget crunch and the expanded homestead exemption.

Following yesterday's special meeting on the exemption, Council's next scheduled session is a budget work session on July 27. Presumably, it won't last until 3am the next day.