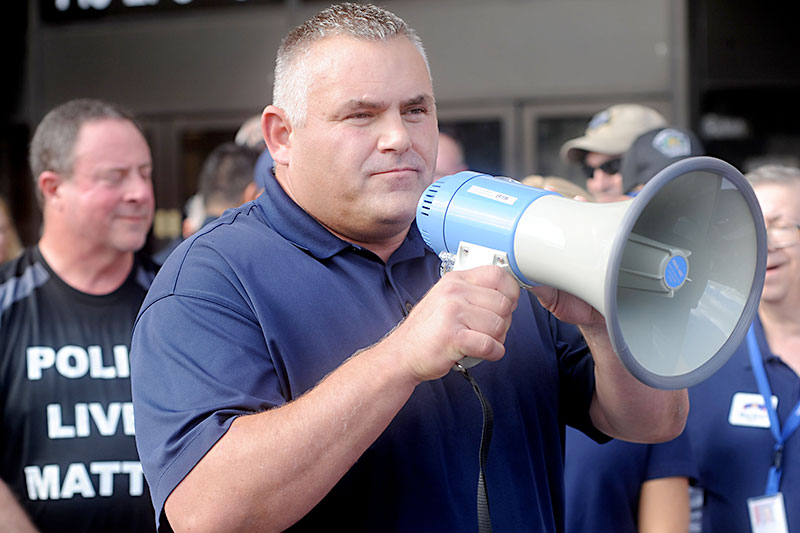 Austin Police Association President Ken Casaday drew heat from the nightly news last week when it was reported that the 17-year veteran was under review with the Downtown Area Chain of Command for dropping a forearm across the upper body of a 23-year-old.

The use of force, which occurred around 2:30am on Saturday, June 18, became a hot news item after it was captured on video by local activist Julian Reyes, and posted to the YouTube page of copwatch group Peaceful Streets Project that weekend, over the description, "Cops are terrorist scum." The video shows 23-year-old Andrew Garcia petting a service horse from the department's Mounted Patrol unit shortly after the bars closed Friday evening – a misdemeanor offense under the Texas Penal Code for Interference With Police Service Animals. An affidavit signed for the arrest of Garcia, who was eventually charged with assault on a peace officer, a third-degree felony, for headbutting another cop outside of APD's Downtown booking station, indicates that officers tried to arrest him after he petted the horse, but that he "pulled away and yelled 'Don't touch me.'" Reyes' video captures what happened after that: Garcia gets swarmed by at least four other officers, and Casaday comes into the scene from the left. The lumbering APA president raises his right arm and strikes once onto Garcia, then pulls out of the scrum.

It's tough to tell whether the use of force and subsequent review would be news if it was carried out by any other officer. The application, according to cops who reviewed the video and spoke with the Chronicle off the record, falls under the Response to Resistance classification of Level 3, reserved for instances in which "a weaponless technique is used with or without complaint of injury or pain," according to APD's employee handbook. Casaday's meaty forearm looks bad, they say, but use of force is an ugly requirement of the job. (See "Sixth Street Showdown," Feb. 26, to see how ugly.)

"If we didn't [use force]," says one officer, "we wouldn't be able to arrest someone who doesn't want to be arrested." Cops say that the standard axiom for applied use of force is "one level higher than the force that's being used on you." Central to any review is whether the use of force could be considered "objectively reasonable."

Use of force happens all the time Down­town. APD logged 961 instances in which use of force (or its now-official, less salacious classification, Response to Resistance) was employed by patrolling officers in the Downtown Area Command last year. DTAC has seen an average of 847 instances each year since 2011. Each case gets reviewed by DTAC chain of command. (Use of force in any region gets reviewed by chain of command.) Casaday's case likely won't be reviewed for weeks, perhaps even months. For now, he remains on active duty – able to fill in on overtime, as he was doing Downtown the night of June 18, whenever he so chooses.

As APA president, Casaday does not handle police duties unless he works patrol on overtime. His full-time business pertains to union matters. Throughout his tenure, Casa­day has routinely filled in on overtime assignments at Brackenridge Hospital and Down­town patrol, where the department's staffing shortage has had a particularly stark effect.

A straw poll of local cops conceded that Casaday likely won't see any repercussions for his actions. However, his current state in limbo does present a few interesting considerations. Since Casaday doesn't often do police work, he maintains a remarkable amount of immunity within APD headquarters. Going under review, even for something as recurrent as use of force on Sixth Street, puts him on the line in ways his day-to-day activities typically couldn't. (Indeed, Casaday declined comment on this story, a rare occurrence for a union head.) That it's happening at a time in which the February David Joseph shooting, and subsequent termination of Officer Geoffrey Freeman, has made tensions unusually stiff between the department and its union makes the plot a bit more juicy – as does the fact that the two parties are preparing to go to the negotiating table to hammer out a new collective bargaining agreement next year. As president, Casaday will lead discussions for the union.

Expect the stresses of policing Sixth Street to be at the top of his agenda.

See the arrest video at www.youtube.com/watch?v=DnKIE-bQQWE.