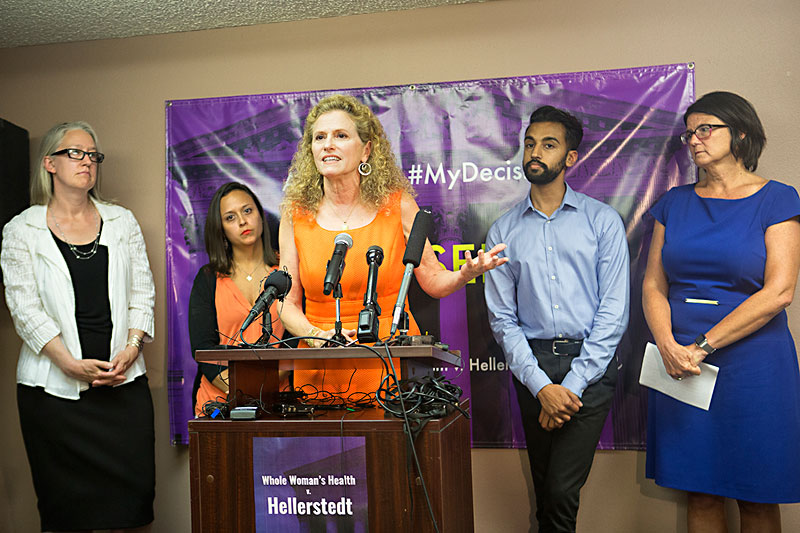 At a press conference Monday, Rep. Donna Howard, D-Austin, said she and other Democratic lawmakers would fight against any new anti-choice bills that could creep up next session. (Photo by Jana Birchum)

"Did we win today or what?" asked NARAL Pro-Choice Texas' Heather Busby to a cheering sea of jubilant and orange-clad pro-choice Austinites. Hundreds in the community, including U.S. Rep. Lloyd Doggett and the Texas Legislature's Travis County delegation, packed Scholz Garten Monday afternoon to celebrate the historic U.S. Supreme Court ruling striking down two parts of Texas' draconian 2013 anti-abortion law, House Bill 2. The revelers – many of whom had stormed the Capitol to protest the bill during former state Sen. Wendy Davis' epic 13-hour filibuster and beyond – basked in the fact that for today, Texas women won a rare victory.

This wasn't the only cause for celebration, though. In its 5-3 ruling, the Supreme Court delivered another rare reassurance for Texans, often starved for reproductive health policies based in medical science: Facts and evidence eventually prevail. The court's opinion, drafted by Justice Stephen Breyer, acted dually as an indictment of the failure of Texas officials and the notoriously conservative 5th Circuit Court of Appeals (which upheld the law) to seriously consider the ample and well-researched evidence demonstrating the dire impact of HB 2 and, in the state's case, produce its own meaningful proof of the law's necessity. SCOTUS sharply rebuked, "When directly asked at oral argument whether Texas knew of a single instance in which the new requirement would have helped even one woman obtain better treatment, Texas admitted that there was no evidence in the record of such a case."

In its 5-3 ruling, the Supreme Court delivered another rare reassurance for Texans, often starved for reproductive health policies based in medical science: Facts and evidence eventually prevail.

With swing vote Justice Anthony Ken­nedy siding with liberal judges, the high court – heavily factoring in the evidence – found two key provisions of HB 2 unconstitutional and an undue burden on women seeking abortion. Seen as the most pivotal abortion rights case in more than two decades and the culmination – and vindication – of nearly three and half years of tireless fighting by pro-choice advocates, providers, and lawyers, Whole Woman's Health v. Hellerstedt challenged a rule that mandates physicians secure admitting privileges at a hospital within 30 miles of the abortion clinic, and a requirement, which had yet to take full effect, that forces clinics to transform into ambulatory surgical centers (ASCs). "Both the admitting privileges and the surgical center requirements place a substantial obstacle in the path of women seeking a previability abortion, constitute an undue burden on abortion access, and thus violate the Constitution," wrote Breyer for the majority opinion.

The ASC rule would force providers to make costly changes – including installing new HVAC systems, and widening hallways – deemed not only "entirely unnecessary" but an impediment to basic health care by major mainstream medical organizations including the American Medical Association and the American College of Obstetricians & Gynecologists. The building expenses were estimated to cost up to $3 million, a price tag that would put largely independent, modest clinics in the state swiftly out of business and leave Texas with as few as 10 clinics to serve 5.4 million reproductive-aged women, creating an unprecedented health care crisis on top of an already tattered health safety network. In Austin, only the Planned Parenthood ASC on Ben White Blvd. would have remained.

SCOTUS picked apart the state and 5th Circuit's often illogical arguments for the two provisions. They pointed to the double standard of the ASC rule, noting the low mortality rate of abortion in contrast to other medical procedures like colonoscopies, which are not required to be performed at an ASC. Providing few, if any, health benefits for an already highly regulated and largely safe procedure, the ASC rule is "not necessary" and poses an undue burden on women, they determined. While the state minimized the logistical catastrophe that would ensue for remaining clinics accepting displaced patients if the ASC rule were to be enforced, SCOTUS drew attention to it: "Common sense also suggests that a physical facility that satisfies a certain physical demand will generally be unable to meet five times that demand without expanding physically or otherwise incurring significant costs. And Texas presented no evidence at trial suggesting that expansion was possible."

"We conclude that neither of these provisions offers medical benefits sufficient to justify the burdens upon access that each imposes," wrote Breyer.

Whole Woman's is considered a test of seminal 1992 abortion rights case, Planned Parenthood v. Casey, which allowed states greater latitude when regulating abortion, but also barred them from passing "unnecessary" laws that have "the purpose or effect of placing a substantial obstacle in the path of a woman seeking an abortion of a nonviable fetus." The "undue burden" test allows the court to balance the state's interest in protecting fetal life with the ability of women to access their constitutional right without interference.

While a federal district court judge struck down HB 2 as unconstitutional, the conservative 5th Circuit Court of Appeals upheld it, failing to consider the closure of more than three-fourths of Texas abortion clinics a substantial obstacle to abortion access. The 5th Circuit, downplaying HB 2's barriers for poor and minority women, largely swallowed whole the state's argument that the law is meant to protect the health and safety of women and refrained from questioning anti-choice lawmakers' intent in passing the law, despite the stunning lack of medical evidence backing up the legislation's necessity. In short, the Supreme Court said, you can't do that.

The 5th Circuit erred by not taking into account the burden the law imposes on abortion access together with the medical benefits the law ostensibly provides, as Casey requires, wrote SCOTUS. It also failed at checking evidence from the Texas Legislature to justify the law's necessity, giving uncritical deference to the Lege: "Explicit legislative findings must be considered, but there were no such findings in HB 2." SCOTUS made clear they, like the federal district court that struck down HB 2, have "placed considerable weight upon evidence and argument presented in judicial proceedings," including research on increased travel times, number of women and providers affected, and ability to handle increased capacity when clinics close.

And the paltry (and unpersuasive) evidence the state did bring to the table wasn't sufficient for proving their argument – that the law would protect the safety and health of women. "The State's record evidence, in contrast, does not show how the new law advanced the State's legitimate interest in protecting women's health," wrote Breyer.

In her concurring opinion, Justice Ruth Bader Ginsburg sent a clear message to other states that are trying to pass abortion-restrictive laws: "It is beyond rational belief that HB 2 could genuinely protect the health of women, and certain that the law 'would simply make it more difficult for them to obtain abortions,'" she wrote. "Tar­geted Regulation of Abortion Providers laws like HB 2 that 'do little or nothing for health, but rather strew impediments to abortion' ... cannot survive judicial inspection."

It's important to remember that the other two parts of HB 2 still stand: One rule bans abortion after 20 weeks of pregnancy and the other had forced women to follow outdated and potentially unsafe FDA protocol when taking abortion pills – however, the FDA recently updated its guidelines rendering that rule considerably ineffective. HB 2 has led to the closure of more than half of the state's abortion clinics, leaving 19 out of 41 clinics in operation. Two of the four Austin abortion clinics ceased services after HB 2 passed, including Whole Woman's Health's flagship clinic.

“Today’s decision marks a turnaround for Texas and for our country, but let me be clear: This win doesn’t mean the struggle is over.” – Amy Hagstrom Miller, lead plaintiff and head of Whole Women’s Health

Amy Hagstrom Miller, lead plaintiff and head of WWH, expressed her excitement for the ruling this week but also cautioned, as other providers and pro-choice leaders did on Monday, that while the decision is a monumental victory for reproductive health in Texas, much irreversible damage has been left in its wake, and clinics will not simply be able to reopen overnight. "Today's decision marks a turnaround for Texas and for our country, but let me be clear: This win doesn't mean the struggle is over," said Miller. "We have a daunting task ahead of us to determine whether and how we can reopen our health centers that were forced to shut their doors over the past several years. Renewing leases, hiring staff, and working with the communities that we previously served to help us reopen ... this decision only addressed two of the many, many restrictions women face to get abortion care in Texas."

While the struggle may not be over, the Supreme Court's historic decision assures that the next time a Texas legislator tries to pass a law that restricts a woman's constitutionally protected right to choose, they better have more than just misguided faith and conservative ideology to back it up – some actual facts might help, too. 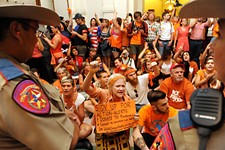