From bonds to staff review, a Council's work is never done 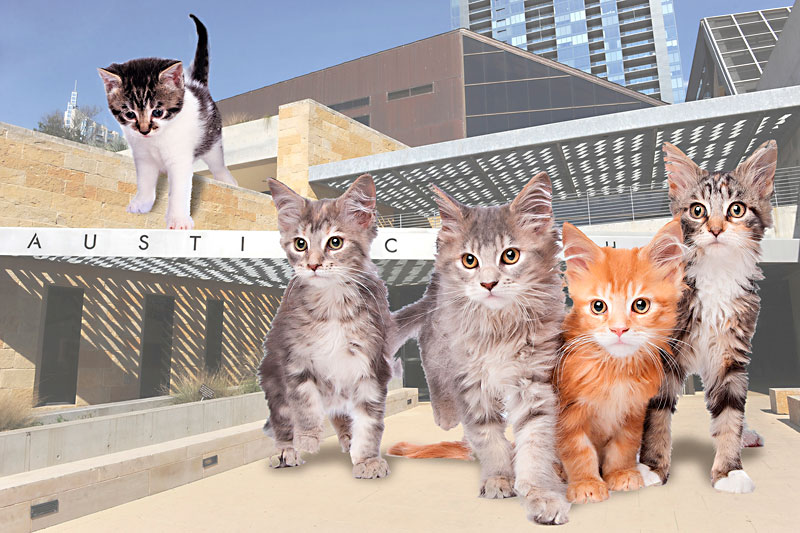 Never let it be said that City Council hasn't left itself enough to do. Today's agenda (June 23) features a hefty 103 items (not including those on a couple of "special" agendas), and among them plenty of quicksand that could engulf the dais for hours (certainly more than enough to keep dozens of department heads standing on call throughout the morning's "consent" agenda). This is nominally Council's last meeting before its summer hiatus, with the next scheduled session a budget work session July 27 – although there's always a chance of more special-called meetings.

As if tinged with seasonal nostalgia already, today's schedule includes no less than four official congregations: 1) the regular meeting, beginning at 10am; 2) a "Smart City Austin Appreciation" event, at the Vic Mathias Trailhead (aka Auditor­ium Shores) at 11:30am; 3) a "Special-Called Meeting" to decide whether to increase the 6% property tax homestead exemption established last year, with a public hearing at 4pm; and 4) the meeting of the Austin Housing Finance Corporation (committee of the whole), scheduled for 3pm. These are on the heels of an extended Tuesday work session (much of it devoted to debating the transportation bond), and a noon Wednesday executive session for the much-delayed annual review of the performance of City Manager Marc Ott.

Each of these somewhat overlapping sessions has its own backstory – with the regular meeting today featuring about 103 of those. On Tuesday, Council devoted most of the morning to the transportation bond discussion, and while Mayor Steve Adler strained mightily to persuade his colleagues that it's $720 million or bust, most of his captive audience didn't appear to be buying (see "How Do You Get to 100%," June 24). Indeed, a herd of cats might feature more consensus than this council group – perhaps if they'd started on a transpo bond plan last year, by this time they would have worked out the kinks.

By the time you read this, the U.S. Department of Transportation will likely have made official (announcement expected today) what the Columbus, Ohio, papers and the Austin Business Journal were reporting Tuesday – that Columbus has won the Smart City Challenge, edging out Austin, San Francisco, and four others for $50 million in grants to support "smart" traffic innovation. City Hall was not yet commenting, but the "Appreciation" event will no doubt recognize the months of work by staffers and volunteers, which the mayor insists will not go to waste because the city will move forward on its own. (Columbus seemed a long shot – except that the city and local businesses there pledged another $90 million to support the project.)

The "special-called" homestead exemption meeting is required because some council members are committed to raising the exemption, and July 1 is the deadline for filing with the state – although Austin's FY 2017 budget will not be finalized before September. That's important because an additional 6% exemption, for example, would mean another $11.5 million out of the public kitty – already straining to accommodate about $50 million in anticipated "cost drivers" for the coming year. So, working in the dark, Council will estimate what the city can afford – and if they go high (6%), the owner of a $250,000 home can expect about $6/month in "tax relief," while other needs go begging.

Judging from the work session, there remains much more to be discussed on the bonds, with the mayor and Council Member Greg Casar advocating most strongly for that $720 million (in different allocations), and CMs Ann Kitchen and Delia Garza most strongly urging caution: They don't want to blow the wad on "mobility" when other needs – affordable housing, parks, libraries, etc. – may come calling for bond work in 2018. Item 80 (creating a Bond Election Advisory Task Force for 2018) will likely pass, but Items 83 (the mayor's $720 million proposal) or 88 (the Mobility Committee $300 million plan) are up in the air, and members may try to split the difference – or punt until next year. Other items to watch:

• Item 22: Would establish a "Media Production Development Zone" (under the Texas Film Commission) for the benefit of video-game production firm Certain Affinity, offering tax incentives in return for jobs and investment.

• Item 63: Third and final reading of an ordinance granting a taxicab franchise to a drivers' co-op, ATX Coop Taxi. (The "all-powerful" existing franchises oppose the co-op, yet the supposedly supine Council somehow is not doing their bidding.)

• Items 73, 74, and 75: These normally pro forma resolutions addressing pay and benefits of the city clerk, auditor, and Manager Ott – could be routine, or could be occasions to announce the much-debated status of Ott (who just announced he's a finalist for executive director of the International City/County Management Association – face-saving all around?)

There are a great many more items under the deadline gun, and if I've missed your favorite it's only because we're all in a hurry to get to summer vacation. The council agenda clerks haven't even managed this week to itemize the music and proclamations, so the dinner break might be accompanied only by silence and ennui. Sum­mer­time, and the livin' is easy.