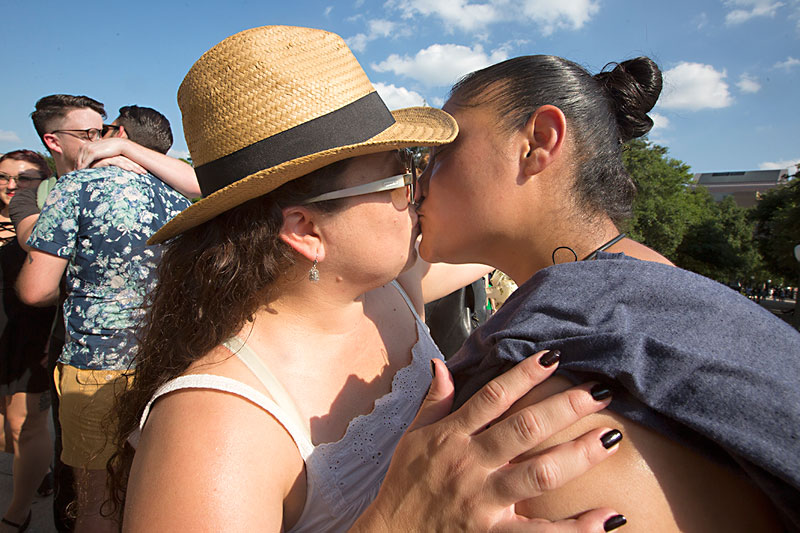 At the vigil to honor the victims of the Orlando mass shooting on June 12, Mayor Steve Adler implored the city's queer community to show their love for each other in public. On Sat., June 18, a crowd gathered on the south steps for the Kissin' at the Capitol demo to do just that. (Photo by Jana Birchum)

City Council meets today (June 23) ... and meets, and meets, and meets. The lengthy agenda includes more debate and a possible vote on a November transportation bond, a special session to consider expanding the property tax homestead exemption, and much, much more. (See "Herding Council Cats," June 24.)

The U.S. Department of Transportation will make the official announcement this week that Columbus, Ohio – not Austin nor five other finalists – has won the "Smart City Challenge" and $50 million in public and private grants to aid in transportation innovation. The dark horse was helped by city and local business pledges of $90 million in matching funds.

AISD trustees approved a $1.3 billion budget on June 20 for the 2016-17 school year, but $406 million of that goes to the state under the recapture system. The final school district budget does include a 4% pay raise for all workers and sets the minimum hourly wage at $13.

Mayor Steve Adler and Council Member Pio Renteria proclaimed Austin the home of Homer the (formerly homeless) Goose on June 21 to help kick off the Challenger Street Newspaper's Homelessness Awareness Roadshow. Adler called the now-stuffed Homer, who died last year at 27 years old, "a symbol of a much weirder Austin." Homer will visit churches and schools to shed light on issues facing the city's homeless population.

Texas ranks 43rd in the nation for overall child well-being, according to a new report by the Center for Public Policy Priorities and the Annie E. Casey Foundation. The state, which failed to expand Medicaid under the Affordable Care Act due to anti-Obama politics, leads in the number of uninsured children, with about 784,000 kids going without health insurance in 2014. The report also showed 25% of Texas children live in poverty.

Surprising no one, Texas Senators Ted Cruz and John Cornyn helped defeat a series of gun control measures in the wake of the Orlando mass shooting. Cornyn said restricting the ability of people on the terror watch list to buy firearms is "un-American."

And so much more: The Texas Court of Crim­in­al Appeals stayed the execution of Robert Roberson ... APD arrested a suspect in the I-35 rock-throwing case ... CodeNEXT chief Matt Lewis resign­ed amid a Human Resources investigation ... Dogs committing murder ...