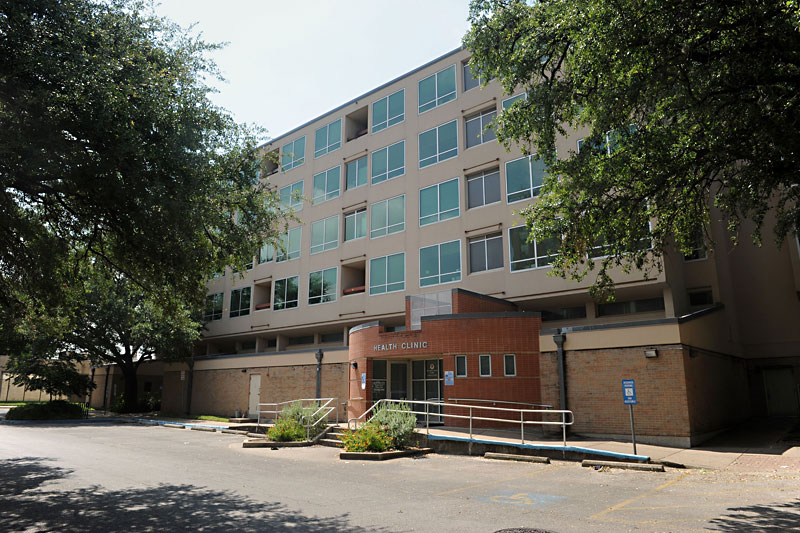 Depending on the outcome of an item on this week's City Council agenda, some residents at the Rebekah Baines Johnson Center in East Austin could soon be facing homelessness. Either way the vote goes.

Austin Geriatric Center, the nonprofit that has managed the property for decades, is looking to sell a portion of the 18-acre tract in order to help pay for the rehabilitation of the RBJ tower and to construct new affordable units on-site. AGC, along with its team of developers including Southwest Strategies and DMA Development, has been working with the city for the past several months to negotiate a code amendment to the Festival Beach Subdistrict of the Water­front Overlay. The amendment would create an exception to the impervious cover restriction of 40% to a modified 68% for qualifying properties in that district. Without the code amendment, AGC argues, they cannot sell the land at a price high enough to fund this redevelopment.

The trade-off between impervious cover and affordable housing is nothing new, but the twist here is that AGC and its team claim that even with the sale, they cannot commit to their current levels of affordability, which are some of the deepest in the city. The complex, which mostly houses senior citizens, includes Section 8 housing as well as units subsidized by federal and city money. Presently, RBJ offers 80 units at less than 30% median family income, 46 below 50% MFI, and 14 below 60% MFI. If the code amendment passes, the owners intend to offer 45 units at less than 30% MFI, 150 below 50% MFI, and 255 below 60% MFI, according to the latest memo.

While AGC's plan would be a net gain of affordable units, District 3 Council Member Pio Renteria is concerned about the loss of units below 30% MFI. Renteria has been involved in this case since before he was a council member (his house is a few blocks away from the project), and he is pushing to retain as many as 140 units below 30% MFI on the property. "We want to put language in the amendment that holds the owners to providing units that meet that need," Renteria said.

Clarke Heidrick, the chair of AGC's board, said the project's financing challenges make it impossible for the owners to commit to that number of units below 30% MFI. "We'd like to see as many deeply affordable units as we possibly can," he said. "The issue is financing. We have to be able to finance our project in compliance with [U.S. Department of] Housing and Urban Development requirements, and we have to be able to pay our debt."

One source of the project's financing is from HUD's Housing Assistance Pro­gram, which must be renewed every five years. But AGC and its developers are concerned that the federal government could change this program in a way where it would no longer be available to the RBJ project. Therefore, say the developers, they can't figure that revenue source into their projections for redevelopment. During a council work session on June 7, Neighborhood Housing and Community Development Director Betsy Spencer called this assumption into question. "His­tor­ically, we have never seen the Housing Assistance Program not extended," she said.

The city's Watershed Protection Depart­ment has likewise disputed the developers' claim that 68% impervious cover is necessary to meet their financial objectives. In December of last year, Council directed the department, along with the Planning and Zoning Department, to work with AGC's development team to gauge the impervious cover exemption, adjusting it to the "maximum extent feasible." "From a technical standpoint, the owners and developers are doing as much as they can to offset the environmental costs," said Chuck Lesniak from Watershed Protection, "but they have not provided us with enough financial data for us to agree that 68% impervious cover is the 'maximum extent feasible.'"

Last week, Dave Stauch from Capital Project Management, whom AGC hired to coordinate the project, presented AGC's updated plan at the East Cesar Chavez Neighborhood Planning meeting, and the contact team voted to support the redevelopment. However, there were some dissenting votes, including Sylvia Marroquin, who thinks the project will eventually exclude the senior community it currently serves. "They're not going to provide the affordable housing they originally promised," she said. "That demographic of people will not be there in the future."

Julio Perez, who also voted against supporting the project, said that the Festival Beach Community Garden has already done all it can to prevent the flooding of its plots. "We're already getting runoff from the RBJ building and parking lot," he said. "If construction starts, I might have to garden elsewhere."

Practically excluded from this decision-making process, of course, are the residents at RBJ. Many of them have no other source of income other than Social Security, and some cannot afford rent above 30% MFI. Willie Johnson, who lived at the Austin Resource Center for the Homeless before he moved to RBJ three years ago, said he might be homeless again with the upcoming changes. "The owners have had meetings to explain things to us," he said, "but no one has given us straight answers to our questions."

Judy, another resident who did not want to give her last name, said that she thinks the new changes are not in line with the original mission of the project. "They are not doing what the Johnsons wanted," she said.

Renteria's primary concern is that if the city cannot come to a mutually beneficial agreement with AGC, the owners may abandon the property altogether. "In line with their goals as a nonprofit, they are obligated to provide affordable housing," he said, "but not necessarily at that location."

Then again, some of East Cesar Chavez Neighborhood Planning Team are worried that this redevelopment could mean the eventual sale of the entire property anyway. At the meeting, Heidrick reassured the team that this was not AGC's intention. "We are a mission-driven organization," he said. "What would we do with the money?"

Surely there is a developer in Austin with a couple of ideas.

A Development Project With a Silver Lining
The Rebekah Baines Johnson Center is about to be part of an ambitious master planned community for Austin seniors.