Subversion Not OK at RRISD

Round Rock ISD is facing accusations of censorship after canceling a series of classroom visits from a children's author. The writer has said it is because he previously promoted a book with a trans protagonist, but the district says it's because he may encourage kids to disobey their parents.

Writer and literacy advocate Phil Bildner has visited schools around the world, talking about books and recommending texts to grade-schoolers. A former New York City Public Schools teacher, for the last eight years his itinerary has included RRISD, and last December he was invited to return to its campuses. But on June 2, he posted an apology to the communities at those schools, saying that he had been contacted via email by Library Services Director Ami Uselman, who had summarily canceled the visits.

Bildner said that Uselman did not give him an explanation, but he voiced his own theory via the American Library Association blog. In September and October of 2015, he made his annual visits to RRISD campuses: Bildner wrote, "We talk about characters who are different than us. Look different. Believe different things. Dress differently. Because when we read, we develop a better understanding of the human experience." As part of that remit, at seven of the campuses he discussed George, an award-winning book by Alex Gino about a transgender girl. Suddenly, he found that he was being followed by a senior administrator for the remaining six presentations. Bildner wrote, "I've been visiting the Round Rock schools every year since 2007. I can count on one hand the number of times an administrator from any district has stayed for even a portion of my presentations prior to last year." Kristin Pekoll, the ALA's assistant director for intellectual freedom, has encouraged her association's members to put pressure on RRISD to explain and reconsider their decision. She cited the Library Bill of Rights, adopted by the ALA in 1939: "Libraries should challenge censorship in the fulfillment of their responsibility to provide information and enlightenment."

However, the district has its own version of events. In a written statement, RRISD Communi­cations and Community Relations executive director Corey Ryan said the decision had not been made because of Bildner's recommendation. Instead, he wrote, "In multiple presentations last year, Mr. Bildner made a statement to students regarding not listening to the grownups in their lives." Rather than lauding Bildner as being in the same rich literary tradition of subversive kids' authors like Lewis Carroll, Roald Dahl, and Lemony Snicket, district leadership decided "the message was not in alignment with the values of Round Rock ISD [and] decided it was in the best interest of students to allocate our financial resources to bring different authors to our schools." 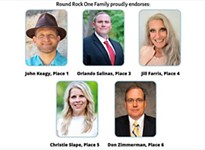 Wingnut Crusaders Want All of Round Rock ISD
Storming the castle