Robert Jensen's 10 books range from fairly scholarly approaches to political questions – free speech, pornography and inequality, racism and white privilege, the religious activism of a nonbeliever – but all, as he says, are written "for a general audience, not for academic specialists." Despite his institutional bona fides (he's a prolific scholar and a full professor in UT-Austin's School of Journalism), he has a rare gift among academic writers for combining cultural theory with everyday human context, in a plain-speaking style that engages readers without pandering. Although his primary work is teaching, writing, and speaking, he's always maintained a secondary occupation as a political organizer, sinking effort and resources into union and co-op work, anti-pornography efforts, and such ongoing local projects as the Third Coast Activist Resource Center, a sort of DIY progressive think tank.

It's as a prolific writer that Jensen has had the most public impact, and his most recent book, Plain Radical: Living, Loving, and Learning to Leave the Planet Gracefully (Soft Skull Press/Counterpoint), is also his most personal. Conceived as a memoir and tribute to his close friend and mentor, the late Jim Koplin of Minneapolis, the book is also an intellectual autobiography, specifically a tale of the author's awakening to "radical" ideas: "Not radical in the sense of dangerously extreme or a fanatical ideologue," as he describes Koplin, "but instead radical in its most basic meaning – going deep, to the root of a problem." Jensen met Koplin in 1988, when Koplin was a retired psychology professor volunteering in local activist groups, and Jensen was just beginning his graduate studies in journalism at the University of Minnesota. Jensen credits Koplin with dramatically transforming his perspective on politics, culture, and "plain living," and says he was not alone in experiencing Koplin's remarkable influence. The two men became friends and activist colleagues, and remained close until Koplin's death, at 79, in December of 2012.

I spoke to Jensen recently about Koplin, what the relationship meant in his own life and work, his decision to write about Koplin, and how this book fits into Jensen's current perspective on the human prospect. Of Koplin, he reiterated, "He had a profound influence on how I came to think about intellectual life, politics, virtually everything. ... And I eventually learned that he had this kind of influence on the lives of a large number of people. He was never a very public person – he wasn't a writer, he wouldn't put himself out front. He brought wisdom to the people in his circle." Koplin was quiet, dedicated, "behind the scenes" (he was known locally as a hands-on master of papier-mâché puppets for theatre groups and demonstrations). "It struck me as important to write about him; there was an elegance about the way he thought about the world."

Jensen recalls Koplin's influence on him as "personal, professional, political, and intellectual," and said the friendship came at a perfect moment. "As a young journalist in mainstream journalism [prior to graduate school], I was preoccupied with the story of the day, and trained to be politically neutral and to not entertain any larger ideas about what you're reporting. It's hard to develop any coherent political critique. ... Jim showed me what it's like to have a coherent framework to understand the world. He came from a radical position on all fronts. I had been trained to think of radicals as sort of crazy, but he seemed eminently sensible to me. ... So he was an introduction to radical thinking and radical politics, that just sort of fell into place.

"On a personal level, we just resonated as friends. We were both from the upper Midwest, we had both been kind of oddball kids – boys who didn't fit into traditional masculine norms." After a time, Jensen said, the friendship deepened into a romantic and sexual one, although it didn't remain so. Had he been surprised? "Well, pretty much the last 30 years of my life, everything's a surprise," Jensen said with a laugh. "I was married, with a child, and that marriage had broken up shortly after I'd met Jim, in part because of doubts about my sexual orientation. Was I gay, was I straight, was I bi? I'm not sure I knew then, and I'm not sure I know now." (For the record, Jensen currently lives in South Austin with his wife, singer-songwriter Eliza Gilkyson, whom he married in 2007.) 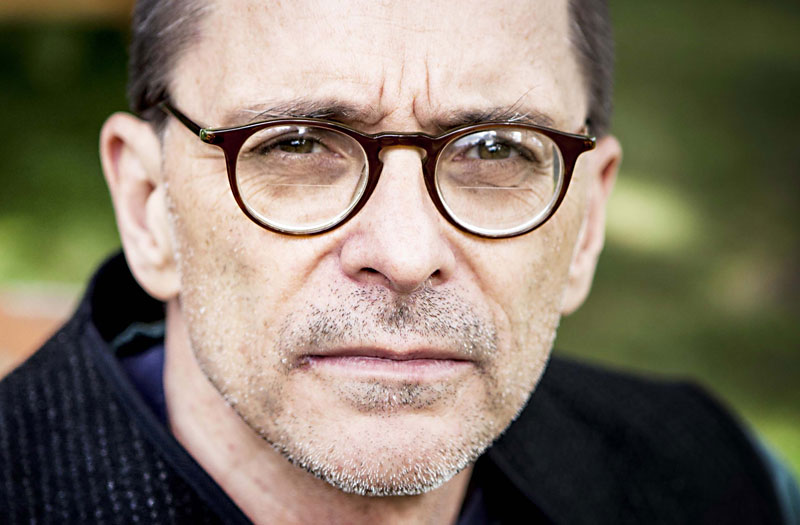 Jensen says one of his running jokes with Koplin went simply, "How did a boy from Fargo, North Dakota, end up here?" (a gag carried over into Plain Radical, as a section head, "What Is a Boy From Fargo Doing Writing This Book?") Koplin was perhaps the first "openly gay" man whom he knew closely as a friend, and "it's not surprising that a more intimate connection had emerged," although the two men were separated by 25 years. Eventually Jensen realized (although Koplin was the first to acknowledge) that the sexual relationship had reached an end. Jensen recalls, "It was a really wonderful phase of our relationship, but also a very painful one, because we couldn't sustain it. But Jim remained willing to hang in there with me through all of that difficult transition. My relationship with him was unique – that personal dimension was very intense. And later, partly because of that, it became important for me to carry on his vision of the world into a more public place."

Returning to the notion of a "plain radical," Jensen describes Koplin's politics as grounded in "a lot of work" – physical and intellectual, and closely tied to both his community activism and his urban garden. Koplin had the varied, hands-on skills of a man raised on a human-scale farm. Although he'd also been a professor, he expressed himself in "plain language," not the academic theorizing Jensen was hearing in his graduate courses. "Among political circles and academic circles, there's often a premium placed on jargon and complicated language," notes Jensen. "Another thing Jim gave me, was to show that you could articulate all these things in plain language; that you could grapple with the complexity of the world, yet convey that to people in language that was perfectly understandable. He helped me avoid the temptation of always trying to sound too smart."

To a degree, Plain Radical is a melancholy book, not only because it is an extended eulogy for a friend, but in the larger sense suggested by the subtitle's close, "learning to leave the planet gracefully." Koplin was among the first people Jensen met who was fully conscious of the worldwide environmental dangers, and "earlier than any person I know" to ponder "the unsustainability of the high-technology world" under contemporary pressures of population growth, pollution, and exhaustive extraction of resources. Koplin's particular death – taken quite suddenly by a cold that became pneumonia – becomes a synecdoche for the potentially imminent death of the ecosystem. "He thought a lot about that, globally and personally. He would say, 'It might be that our last task as humans is to leave the planet gracefully.'" Koplin particularly insisted that "if you assume technology is going to save us, you're misreading history."

Jensen argues (here and elsewhere) that there is no contradiction between his own progressive activism and his larger, data-driven sense that the world is an increasingly endangered place, physically and politically. "And even if there will be massive social dislocations or violence – whatever is coming down the pike – we still have the capacity to make the world more or less humane. ... We can try to affect politics, to change public policy, that's one track. And the other track is to try to live our values and create community on the ground. They're not mutually exclusive."

Can a sense of imminent ecological disaster lead to a commonplace cultural and political defeatism? Faced with the foreboding science and the daily news, "people can feel defeated and paralyzed," Jensen says. "But it's not my reaction, and it wasn't Jim's." The universal and the local conditions are not opposed, he argues, but "different facets of the same reality." For himself, Jensen says, "I'm trying to find ways to make a contribution as the world changes and I get older. My awareness of the scope of the problems has changed," he concludes, "but you react to the moment of history that you're in with the skills that you have."