Austin and Travis County have themselves a new medical director. On Friday, City Manager Marc Ott announced the hiring of Dr. Mark E. Escott, currently the director of the Divi­sion of the Emergency Medical Services/Disaster Medicine at Baylor College of Medicine in Hous­ton. He's set to take over for acting Medical Director Dr. Mark Ackrell as of Sept. 1.

Escott (who also works as an assistant professor of emergency medicine and directs Baylor's EMS Collaborative Research Group and EMS Fellowship program) assumes a position that's come under scrutiny of late, largely due to the work of former Medical Director Dr. Paul Hinchey, who resigned last June to take a job in the private sector with Evolution Health after six years on the job. Though never admitted publicly, conversation around ATCEMS circles suggests that Hinchey left in the wake of mounting pressure from the Austin-Travis County EMS Employee Association, which objected to many of his practices. Specifically, in 2012, Hinchey implemented a change to ATCEMS' staffing model to make ambulances once staffed by two paramedics instead be staffed by one paramedic and one emergency medical technician (EMT) – a model that emergency medical services around the country employ but was never the preferred practice in Austin-Travis County, where two paramedics would staff each ambulance.

Hinchey also had a propensity for decertifying paramedics and technicians who he believed violated prescribed standards – that is, he could revoke their medical credentials and make it such that they couldn't work on ambulances. The practice was highly scrutinized by staff and public safety advocates alike, yet came with no official oversight. Hinchey – as the chief overseer of all clinical care throughout the entirety of the county's EMS systems – had full power to revoke any license he saw fit, and did not have to face any type of appeal process. (See "High Stress at EMS," May 8, 2015, for more on Hinchey's methods.)

Though it wasn't explicitly agreed upon with the union, ATCEMSEA President Tony Marquardt doesn't expect to see those same types of practices carry over to Escott's reign. In fact, Marquardt told the Chronicle on Friday, the incoming MD has been sympathetic to the union's issues in the past. In 2012, as the union was negotiating a new meet-and-confer agreement with the city and lamented certain practices with ATCEMS executives and Hinchey, the ATCEMSEA took a team of delegates on an interview tour to meet with three other medical directors around Texas. Escott, at the time the MD in Montgomery County, was among those who met with the union. Mar­quardt described him as being "very useful" to the process, and sympathetic to the concerns that arise when medical directors demonstrate a propensity for decertifying medics whenever they see fit. He said Escott "has the closest background of the known [applicants] to what the city has currently."

All told, the process to permanently replace Hinchey took a year and two acting medical directors. (Dr. Jose Cabanas assumed the role upon Hinchey's Sept. 2 departure but left later that fall.) Marquardt reports that he wasn't kept updated on the search until receiving a late May email inviting him to participate in the interview process after the field of candidates had been whittled down to four from an initial pool of 37. 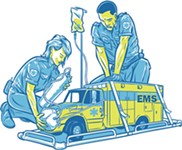 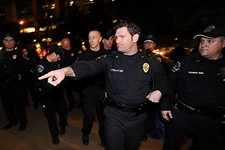