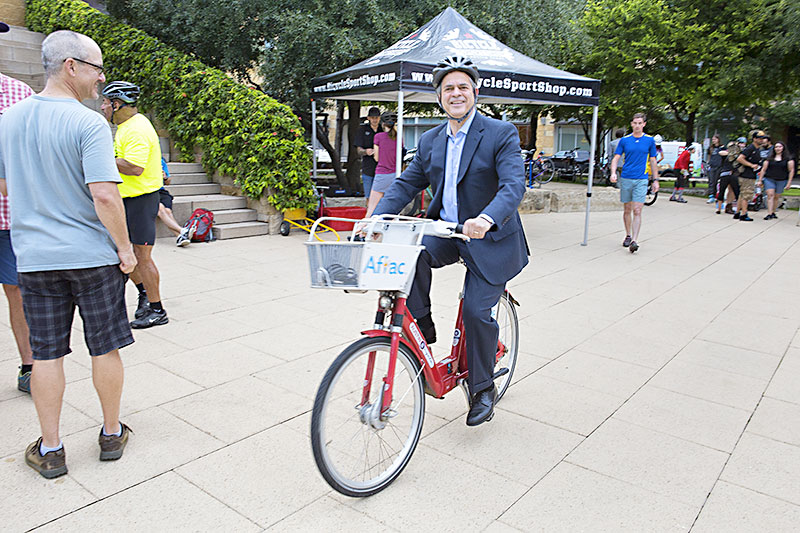 There will be plenty of work to do at today's (June 16) City Council meeting, although how much will actually be accomplished is an open question. Nominally, it's Council's "zoning" meeting – that is, the recurrent 10-1 attempt to consolidate myriad zoning cases into one meeting to avoid bogging down more general-interest matters on other days. And there are indeed no less than 32 zoning cases on the agenda, which – even with predictable postponements – presumably would offer a full day's work. (The most embattled of these, the proposed Grove at Shoal Creek PUD, will be postponed until Aug. 11, per staff request, because it's being heard at the Zoning and Platting Commission next week.) But it's equally likely today that the zoning cases will be an afterthought to debates on transportation, the housing trust fund, fair-housing initiatives, library appropriations ... and much more.

The current headline debate ("Dueling Bondage," June 13) is over a November bond proposition – whether there should be one, and what it should contain. Mayor Steve Adler has proposed a $720 million package (Item 27) whose main focus would be existing "corridor plans" – long-term workups of projects needed on seven major city corridors (Riverside, Airport, Lamar, Burnet, etc.) that would make those streets more multimodal and promote denser, transit-sustaining residential development. Other funds would go to "regional" projects, on the one hand, and "local" projects (sidewalks, trails, etc.) on the other.

Nevertheless, two of the mayor's co-sponsors (Council Members Greg Casar and Leslie Pool) will be offering amendments to his plan, not to expand the total funding but to change the proportions to better favor the local projects, particularly non-single-occupancy vehicle projects. In a statement preceding a Tuesday morning press conference, Casar said, "I believe a vision for a more livable, smart, mobile, and just Austin is better served with significant amendments to the mayor's current proposal." As summarized in a subsequent post to Coun­cil's message board, Casar and Pool would move the $100 million proposed by the mayor for "regional mobility projects" – some outside the city limits and aimed at suburban commuters – into the "local" sidewalk-etc.-safety category, cut the corridor's $500 million to $420 million, and move that $80 million into "underserved" neighborhoods for more local projects. (The "Get Austin Moving" coalition of organizations, which has begun agitating for a bond, is weighted toward groups wanting more bike/pedestrian/mass transit options.)

The mayor has asked for discussion today and next week, with potential action for the June 23 meeting, which is their last scheduled meeting until August, when they'll already be deep into budget work sessions. If Council gets down into the programmatic weeds today – and other voices on the dais have expressed yet other priorities – zoning cases may be waiting for a while.

A few of the other high-profile matters are fallout from last week's rather strange meeting (June 9), comprising only eight council members because the mayor and CMs Delia Garza and Ann Kitchen were all in D.C. supporting the city's final pitch for the U.S. Department of Transportation's Smart City Challenge (see "Down to the Last Pitch," June 9). Six votes were still required for any action, and with only eight members on the dais, the conservative bloc (CMs Don Zimmerman, Ellen Troxclair, and Sheri Gallo) discovered they could flex their muscles (at least temporarily). Mayor Pro Tem Kathie Tovo, presiding, had to walk through the consent agenda item by item, with several 5-3 or 5-2-1 votes (with variations) that killed proposals that under a full quorum would have readily passed as a group on consent.

The outcome was largely symbolic – just additional delay, a persistent reflex of this council – as City Manager Marc Ott indicated that because of the unusual circumstances, staff-proposed items that appear to have dais support but were killed by too small a majority would return to future agendas. That included both some central library equipment and materials funding, and all of $100,000 to increase indigent health services – both will likely be waved through this week, unless Zimmerman, et al. decide to make a fuss for show. Also delayed were final decisions on whether to bite the bullet on the expensive acquisition of police body cameras and related hardware, as well as license-plate readers – but those proposals won't return until at least June 23. Other items to watch:

• Item 26: A potential increase in the residential property tax exemption for seniors and the disabled (sponsor Gallo, who last week on principle wouldn't vote for any new Gen­eral Fund expenditures, apparently considers this spending in a different category).

• Item 23: Amending the ordinance regarding driver permitting for transportation network companies, including setting the rules on what prior offenses would disqualify an applicant.

• Items 72-75: Four "time-certain" public hearings, nominally scheduled for 4pm, including the contentious amendment of the Land Development Code to make development regs for charter schools match those for regular public schools; the potential adoptions of both the Side­walk Master Plan/ADA Transi­tion Plan; and the South Central Waterfront Small Area Plan.

There's lots more where all that came from, not to mention those 32 zoning cases. However, since this is a "zoning" meeting, Council will save time by dispensing with proclamations and music. As an alternative, I'd suggest a few choruses of Howlin' Wolf's "Goin' Down Slow."