Council and staff review the preliminary numbers, with crossed fingers all around

The initial City Council budget work sessions ended with a flourish on June 1, an all-day meeting that spent most of its time, strictly speaking, off-budget. Beginning at 9am, Council spent roughly five hours discussing not the draft primary budget issues that occupied the first four work sessions – but the possibility of a November transportation bond package, and what it might contain. If there is to be a bond proposition on the November ballot, Council (and the public) needs to arrive at a consensus fairly quickly – Mayor Steve Adler has said that the end of June is a likely target – and the discussion itself was far from conclusive, suggesting that such a consensus might not be readily at hand.

As Amy Kamp reported a couple of weeks back ("Spitting Into Fires," May 27), Adler has connected the transportation proposals to Austin's affordability crisis and therefore the city budget, arguing that improving transportation choices (especially along transit corridors, the subject of already approved but not executed corridor plans) will not only cut transportation costs but enable more housing units along the corridors – eventually creating downward pressure on housing prices. The mayor further argues that while the budget talks inevitably focus on property taxes and tax rates, housing and transportation costs take a much greater bite out of household budgets, and therefore present broader targets for affordability action.

Based on this initial conversation, it's fair to say his dais colleagues aren't so sure. While nobody objected outright to a bond proposal – and the city has existing debt capacity that would enable roughly $500 million in bonds without requiring a property tax increase – there was much less initial consensus about what such a proposal might contain. Following staff presentations of various possible components, some council members thought there should be more emphasis on non-automobile transit (e.g., the Bicycle Master Plan, pedestrian improvements, mass transit) while others suggested that they'd want to look more closely at the corridor plans before signing on, or find some middle ground on the overall proposal. Council Member Ora Houston was disinclined to support any package, while CM Don Zimmerman argued that the modes should be listed separately – e.g., bike lanes vs. road miles – so that voters could pick and choose. (Generally speaking, bond proposals that avoid combining benefits for various constituencies are pre-programmed for defeat.)

Council's bond conversation will continue over the next three weeks (we'll have more to report in due course). After five or so hours, Council agreed to keep talking, although the rest of the afternoon's focus was public safety staffing (APD and AFD), with Police Chief Art Acevedo and Fire Chief Rhoda Mae Kerr presenting overviews of current staffing, and council members engaging the policy and budget issues raised by those presentations – which boil down to, do we need and can we afford more cops and firefighters? It's worth noting that the question is not always a simple yes/no: Both departments have used overtime to fill staffing gaps (especially AFD, which has been waiting for legal and union contract clearance on hiring), and that is generally more expensive than steadily hiring more personnel.

Speaking of overviews, public safety staffing is but one of several major policy questions that city staff has placed before Council for preliminary feedback on how the elected officials want those questions addressed in the proposed budget, scheduled to arrive at the end of July. Council will spend the next month digging into those questions (in public discussions as well as additional budget queries submitted to staff). Meanwhile, there will be additional public outreach on the overall budget questions, generating public responses on the same questions: How much do you want to spend on this vs. that?

Some of the answers are indirectly reflected in the preliminary numbers submitted to Council in late April. In general, staff is warning that FY 2017 will be a "tight budget year" – that's virtually a perennial budget office motto (they're constitutionally programmed to make the numbers work, whatever the policy), but it appears to carry more emotional heft than in recent years. In the first place, economic consultant Jon Hockenyos warned that the national and regional economies show some signs of softening after a boom cycle. Although Central Texas property values continue to spike – a mixed blessing, to say the least – tapping that bounty through property taxes is always a financial and political trade-off. Moreover, staff reports that city sales tax receipts (distributed by the state comptroller) have not yet kept pace with the 5.7% increase anticipated in the FY 2016 budget – through the first quarter, it's closer to 5.4%. In the simplest terms, should that trend continue, it will mean that the city won't have all the anticipated funding for this year's expenses, putting pressure on reserves and this year's budget planning. (For the record, staff recommended a more conservative sales tax expectation, but Council overruled.) Deputy Chief Financial Officer Ed Van Eenoo told Council that he still expects the revenue to meet expectations (and more recent receipts appear higher) – but the softness of the sales tax pattern at least suggests the city might be entering a less prosperous economic phase.

In that context, the larger financial issues placed before Council for further deliberation include the following:

• "Cost Escalators": These include another $27.5 million in additional costs either anticipated (e.g., a potential 12%, $10.1 million increase in employee health insurance) or other new expenditures pending Council review: IT expenses ($5.1 million), civilian employee wage increases ($4 million), AFD overtime while cadet hiring proceeds ($3.1 million), and so on.

Overall, the preliminary budget numbers reflect a total of $56.6 million in these combined "cost drivers" – not all set in stone, and staff provides conservatively high-cost numbers to allow themselves and Council to ponder worst-case scenarios. But the final number on these costs, after a couple of months of winnowing, is very likely to be closer to $50 million than to zero.

Thanks to rising revenues, during this current year, Council was able to increase spending on programs (from police to parks to social services) while reducing both the property tax rate and (marginally) the property tax bill for most homeowners. But programs initiated in one year generally need to be maintained in the next and following. For example, Council was proud to announce a roughly $8 million increase in funding for Health and Human Services and Social Ser­vices – staff anticipates an $8.3 million continuing expenditure for those programs in FY 2017. Other outstanding needs include additional fire stations, a sobriety center for DWI cases, and improvements in development services (recommended by the Zucker Report). Staff currently estimates $18.8 million plus for those pending expenses – but most of the items haven't been costed out yet.

Nearly half of that estimated $18.8 million is designated for an increase in the 6% property tax homestead exemption enacted by Council last year. This was another proud accomplishment for most council members, although a few balked at the expense and the fact that the exemption most greatly benefits the wealthiest homeowners (and not the renting majority of Austinites, although last year's negotiations produced some corollary renter benefits). Staff estimates that a 5% increase in the exemption would cost $9.1 million – a council majority seems to want another 6%, so call it at least $10 million. (The intended four-year target is the 20% exemption allowed under state law.)

The homestead exemption decision is further complicated by the state's June 30 deadline for the city to file for that exemption – meaning Council has to decide on the exemption, and its amount, not only before it reviews the details of the proposed staff budget (scheduled to be unveiled July 27), but roughly a month before the Travis Central Appraisal District certifies the actual property tax rolls (estimated at July 25). A few days later (Aug. 3), Council is scheduled to adopt a "maximum" tax rate (above which it won't eventually move in September).

Generally speaking, that maximum rate is by default the "rollback" rate – an 8% increase above which would require a rollback election – so it's a placeholder to allow Council to plan and maneuver beneath it. But the lower rate adopted last year limits Council's 8% flexibility in the following year – a circumstance that the new 10-1 council members will be experiencing for the first time. A few welcome the limit, of course – it effectively prevents Council from raising taxes beyond an arbitrary limit that triggers a referendum of largely tax-hostile voters. Still, it doesn't make the budget decisions any easier.

The charts appearing at right provide a snapshot of the overall General Fund (operating) budget, the "overlapping" (multi-jurisdictional) property tax bill for a "median" homeowner, and the economic range (and polarization) of Austinites, from east to west. (Much more of this important but eye-glazing information is available both on the council website – where you can find all the work session presentations, videos, and transcripts – and on the Financial Services website.)

The two big decisions pending for Council this month are 1) Will there be a transportation bond proposal? Of what size and kind? and 2) Will there be an expanded property tax homestead exemption, absent an adopted or even proposed budget (i.e., does Council blow a $10 million hole in a budget that hasn't yet been drafted)? Based on the preliminary discussions, there appears to be more consensus on question No. 2 than No. 1. In 2014, most of these council members ran on the homestead exemption, five are currently running for re-election, and virtually no politician woos voters with the promise, "I'm going to raise your taxes." Whether promising the opposite is fulfillable in FY 2017's "tight budget year" is something we'll learn in due course.

See the city budget development documents online at www.austintexas.gov/financeonline. A "budget simulator," where you're invited to provide recommendations for the city's spending decisions, is at austintx.budgetsimulator.com. 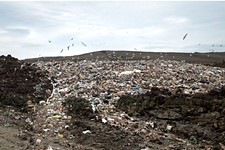 Council Tries to Keep City's Trash Out of Hated Landfill
Waste not, what now?