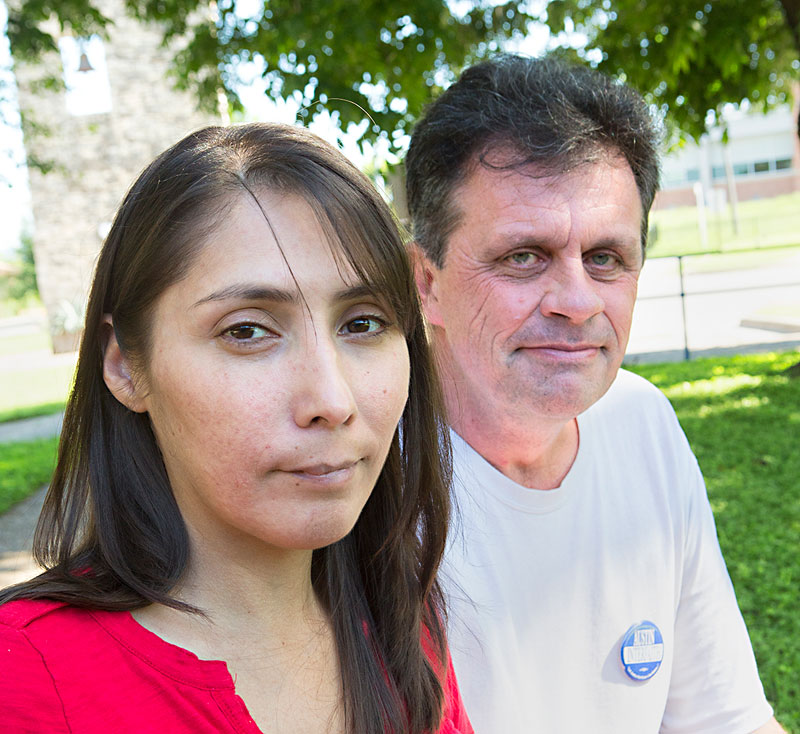 Time has often not been on the side of low-income tenants facing displacement in the whirlwind of Austin's seemingly unstoppable surge of development. Even with the city's notoriously drawn-out process for rezoning requests, developers are usually one step ahead of those being forced to move. By the time endangered residents communicate their needs and wants to the city, it is sometimes too late (see "Fighting to Stay," April 15).

Contrary to this trend, residents of the Heights on Congress apartments began relaying concerns about their complex's forthcoming redevelopment nearly a year before property owner Doug Gurkin intends to file a rezoning application. At an assembly last month organized by Austin Interfaith at the nearby Travis Heights Elementary School, residents spoke before a group that included Mayor Pro Tem Kathie Tovo, AISD trustees Paul Saldaña and Dr. Jayme Mathias, and Gurkin. Tovo wrote in an email to the Chronicle that she was happy to see talks between the developer, the residents, and their supporters happening this early. "I also regard this redevelopment as an important opportunity to increase the number of affordable units available on that site," she said.

Gurkin said that he is committed to working with the residents and their supporters through every stage of the process. "We want to arrange it to where none of our residents with children have to relocate off-site," he said.

This preemptive move by the Heights residents was made possible by their connection to Travis Heights Elementary. While that school is in Tovo's District 9, the Heights are located in City Council Member Pio Renteria's D3, and his office has been involved since Gurkin announced the plans to redevelop. "I have made my commitment to a relocation strategy for the families of the Heights very clear," he wrote in a separate email. "It must be satisfactory to the families' work, transit, and educational needs, and it must incorporate provisions that would give residents the right of first return and also allow the children of the Heights to remain in their schools during the relocation."

One of the city's few in-district charter schools, Travis Heights follows a community-led model, and its parent-teacher association is a member of Austin Interfaith. "We want to be able to pay attention to every student at our school," said Raymond Sinatra, the current PTA president, "and to do that we have to pay attention to the issues facing our community."

A significant portion of Travis Heights students live at the Heights, and some of their parents contacted the school's PTA in January after hearing rumors of redevelopment plans. "My daughter loves going to Travis Heights Elementary," said resident Rosamaria Chavez in a press release. "We want to continue to attend the school even if we are forced to move while the apartments are under construction."

The PTA then reached out to Austin Interfaith, which coordinated a meeting with the owner's development team soon after. Colin Clark, a PTA member, thinks the affordable housing crisis is related to the school attendance crisis, and that addressing one problem addresses the other. "We wanted to respond in a unified and organized fashion," he said.

Austin Interfaith, a broad coalition of 43 congregations, schools, and unions, supported the residents of the Oak Creek Village Apartments in a similar case a few years ago (see "Oak Creek Village Strikes a New Deal," July 5, 2013). Oak Creek originally had around 170 affordable units, like the Heights, and the residents there also reached out to the Travis Heights PTA for help. With Austin Interfaith's support, the Oak Creek Village Tenants Association was able to negotiate a deal with developers to retain all affordable units in the complex. Residents had to temporarily relocate while construction took place, but they were able to stay within driving distance of the neighborhood schools, and some parents received reimbursement for mileage to and from the schools.

Kurt Cadena-Mitchell from Austin Inter­faith said that there are lessons to be learned from Oak Creek. The organizing goal this time around is to ensure that transportation to and from the school is provided for relocated residents rather than them being compensated for mileage or forced to use public transit. "It's hard to imagine people having to put their elementary age child on a metro bus to get to school," he said.

Angie Gonzales, secretary of the Oak Creek association, said it is imperative that the Heights residents organize as soon as possible: "We've gone through this before, and we know how important it is for the residents to know what their rights are." Although not yet official, a tenant association at the Heights is beginning to form.

While it will be several months before the redevelopment process gets going, Austin Interfaith will continue to put pressure on Council to observe the tenants' wishes. "We believe that these tenants should have the choice to stay in their neighborhood and for their children to go to the same schools if that is what they want," Cadena-Mitchell said.

South River City Citizens has also lent its support to the residents by helping set up the community assembly last month. "We wanted to publicly ask the owner to work with us," SRCC President Gretchen Otto said.

From a religious perspective, Reverend Brian Ferguson, another Austin Interfaith leader, said that "Love Thy Neighbor" is not just some cute saying, but rather, "it means standing in solidarity with your neighbors."

Sinatra hopes that his PTA's investment in this redevelopment case will inspire other PTAs in the city to do the same. "Our goal is to preserve and grow affordable housing, which we believe will positively impact all the other AISD schools," he said.

Eliza Platts-Mills, who will take over for Sinatra next semester, said that she feels obligated to support the residents not because of her future role as president, but because they are her neighbors. "They are part of our community," she said. "They are our friends."