Groups remake North Austin neighborhood one bridge at a time 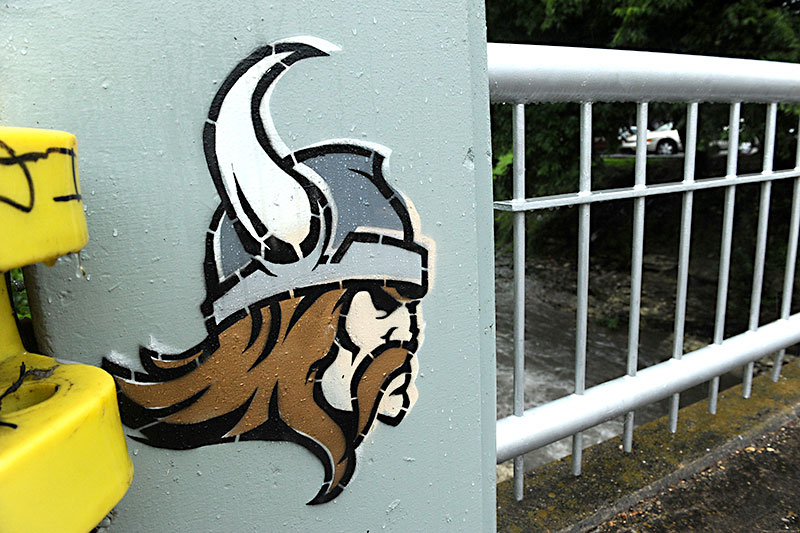 One of the bridge projects at Fairfield near Bridgeport Dr. (Photo by John Anderson)

Before the city pushed north of 183, what's now Rundberg Lane was farming country. Now that farming tradition appears on one of the bridges over Little Walnut Creek, and that's just one of over a dozen new murals, painted by residents and students, designed to beautify the much-maligned area.

It's a collaborative endeavor, with groups including the North Austin Civic Association and arts-based nonprofit Rundberg Rising. The consortium takes advantage of the city's Neighborhood Partnering Program grant assistance program, a part of the Imagine Austin comprehensive plan giving city assistance to community groups improving their neighborhood. Lanier High School art teacher and volunteer painter Isa Boonto-Zarifis explained, "There are so many bridges in our neighborhood that get graffitied and tagged that they said, 'What can we do to beautify our neighborhood but take care of the graffiti problem at the same time?'"

The group found 24 sites along Little Wal­nut Creek, and 15 were adopted by community groups and residents. NACA submitted the application last October and received preliminary approval in January. After that, it went to the Arts Com­mis­sion, which gave it "a hearty thumbs-up," said Caro Dubois, the Rundberg Rising advisory team member who has been overseeing the project. "They're eager to see it completed."

It's not just the small public bridges: The list also includes the Valero at Parkfield and Rutland, which will carry inspirational phrases selected by students. It's also not just paints, with ceramics planned for the 900 block of West Rundberg. Yet it's all been done at minimal cost: The labor comes from a combination of adult volunteers and civic-minded students from Anderson and Lanier high schools, who also provided the designs. Much of the paint was donated, but some came from Austin ReBlend – another city program, whereby old paints dropped off at the Austin Recycle & Reuse Drop-Off Center are mixed to form new paint available for free (for residents and nonprofits). The recent bad weather has slowed the painting process, but Dubois said, "We hope to get 10 or 11 of them finished by the end of this month."

However, the partnership with the city means it's about a lot more than just painting flowers on concrete. In this case, the sweat equity provided by making streets prettier will also make them safer. There's a section of missing sidewalk at Fairfield, right next to Lanier. Dubois said, "Students have to walk in the street on a blind curve to get to school." When finished, the bridge painting should leverage the $300,000 via the NPP needed to make their commute safer.

It's all part of the broader initiative to improve both Rundberg's infrastructure, as well as the perception that the area is just Austin's northern slum. Historically often overlooked by policymakers and City Council, and home to some of the city's poorest and most diverse communities, Dubois said, "We just want to get some positive news about this area. We're affordable and, shoot, we're an international food center."