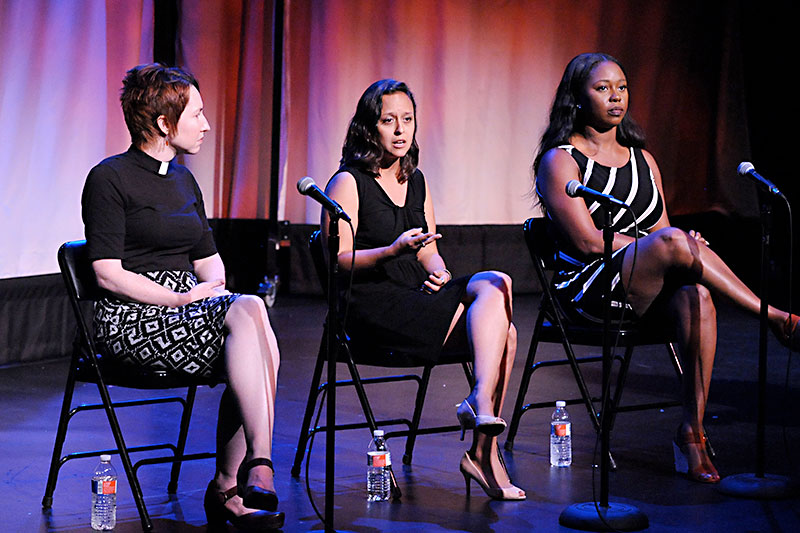 Remarkably Normal, a documentary play by Jessi Blue Gormezano that attempts to combat the stigma associated with abortion, came to the Paramount on May 26. After the screening, Amelia Fulbright (l) from Labyrinth Progressive Student Ministry, the Lilith Fund's Amanda Williams, and Fatimah Gifford of Whole Woman's Health sat for a Q&A. (Photo by John Anderson)

City Council continued budget work sessions and committee meetings this week, with the next regular meeting scheduled for June 9. Meanwhile, five incumbents who drew two-year terms have kicked off their November campaigns, beginning website prep and fundraising. See "Plenty of Work, and Campaigns."

Among the questions to be addressed at Council next week is whether to buy $12 million worth of body cameras for Austin police officers, along with additional hardware (see "Cameras for Cops"). Council Member Don Zimmerman, chair of the Public Safety Committee, questioned the acquisition and the department's policies, charging that "APD, and other city staff, routinely make critical policy decisions irrespective of voting or even consultation of the elected City Council."

Continuing storms forced the Lower Colorado River Authority to close waterways and open floodgates at multiple dams over Memorial Day weekend to deal with high water levels, and the city to close parts of the Barton Creek Greenbelt. The dangerous conditions have been blamed for the death of Leah Morgan Durrett, 34, who drowned Monday while tubing near Barton Springs Pool.

Congress failed to approve financing to counter the spread of the Zika virus before the Memorial Day break, so Texas Senate Health & Human Services Chair Charles Schwertner, R-Georgetown, wrote to the state's Department of State Health Services, urging it to develop "a more robust strategy" to deal with a potential outbreak.

Farewell, Capital Area Food Bank of Texas, hello Central Texas Food Bank: The nonprofit, which distributed over 33 million pounds of food to hungry families during the 2014-15 fiscal year, is rebranding to reflect its growth from an Austin-area charity to covering 21 counties across the region.

Augie Garrido, longtime UT baseball coach, is "relinquishing his duties" after 20 years leading the Longhorns. Garrido has won 1,975 games at five universities since 1969.

Thanks to Gov. Greg Abbott (who must've known somebody whose car got hit), the Greater Austin Crime Commission, and a few anonymous donors, the total reward amount for information leading to an arrest and conviction in the recurring I-35 rock throwing cases has risen to $25,000.