Grove Parks Not (Yet) Superior

Developer has more work to do if it wants staff's blessing 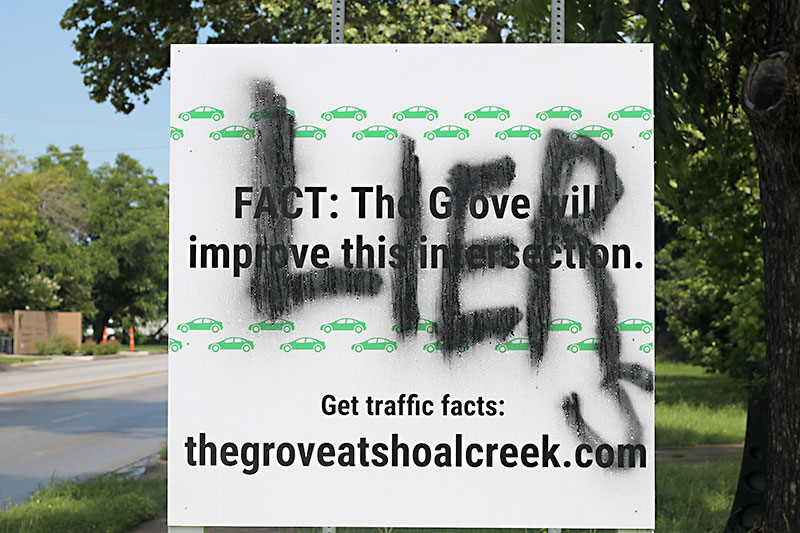 Vandals defaced a sign saying the Grove will improve traffic at the intersection of 45th and Bull Creek. (Photo by Nina Hernandez)

Last week, the Parks and Recreation Board met and, after hours of testimony and discussion, affirmed city staff's finding that the Grove at Shoal Creek planned unit development application (submitted last March by developer ARG Bull Creek, Ltd.) is not superior when it comes to parks. PARD Direc­tor Sara Hensley expressed hope that the city, developer, and neighborhood groups could make their way to an agreement that will "work for everyone," but admitted: "I don't think everyone's going to be happy, though."

The situation is more tense than ever as the project makes its way to City Council. It took months for board member Alison Alter, who was appointed last year by CM Sheri Gallo, to get the item before the Parks board in the first place. Board Chair Jane Rivera said that they had also been asked "multiple times, in multiple ways" by CM Leslie Pool to take up the matter.

When it finally did make it on the agenda on May 24, it resulted in nearly three hours of discussion, between questions from the board, the findings from Parks staff, and testimony from the developer and neighborhood groups. As it stands now, at least the parks element of the PUD application does not, according to the city's criteria, exceed the minimum requirements laid out in the 2007 Parkland Dedication Ordinance – which they must in order to qualify for PUD zoning.

Staff could only analyze 16.63 of the 18 acres ARG has proposed, because two acres are considered "flex space" and ARG hasn't made the final call on where those two acres will be, though ideally, for the city at least, it would be included in (what is now planned as) the 14-acre signature park. Additionally, portions of the land that are designed to be open space cannot be credited toward the parkland because they're within the 100-year floodplain (from the 2007 ordinance) or a critical environmental feature (such as the water quality pond).

ARG takes issue with that calculation by PARD, saying in a statement that those areas "absolutely will be enjoyed by people living and visiting the Grove as much as the active play areas." They blame PARD for not giving them enough guidance on how they could achieve superiority, although an entire slide in the staff's presentation detailed how they might get there. They would need to: 1) place the two acres of flex space in the signature park, 2) add three acres to the signature park, 3) install a trail connecting the property to the Shoal Creek Greenbelt, and 4) make the current park areas more accessible to the public.

As we go to press on Wednesday, June 1, the Grove is in the process of going before the Environmental Commission. All the attention focused on the Parks board has been redirected there. The Bull Creek Road Coalition has been asking residents opposed to the current Grove proposal to call and email the commissioners in advance of the meeting. The developer has raised eyebrows by sending a flier to the residents at the West­min­ster senior living community near the Grove, promising them a limo bus ride and barbecue dinner in exchange for their testimony.

For people whose lives can be sometimes be routine, that's an attractive offer. But at least one resident reported being unwelcome because of their opinion. In an email forwarded to the Chronicle, ARG's consultant Jason Meeker told the resident he would find it "hard to provide transportation back to West­minster from City Hall for those who do not support my client."

"I was clearly joking," Meeker later explained. "Of course our bus is round trip."