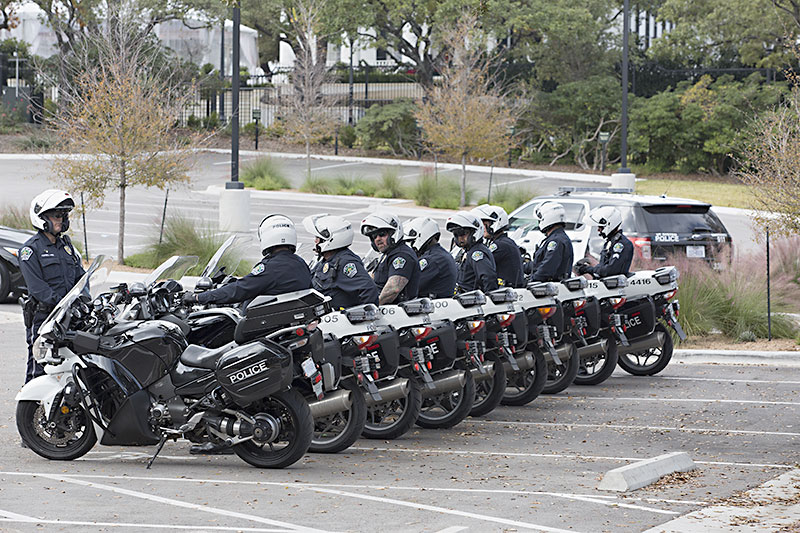 Body cameras: coming soon(ish) to a cop near you (Photo by Jana Birchum)

Next Thursday, June 9, City Council will once again take up the topic of body-worn cameras (BWCs) for the Austin Police Department. The topic was originally scheduled for May 19, but Council punted it in order for the city to have time to consider what was missing from APD's primary operating policy.

The recommendation from the city's purchasing department calls for Council to approve a 60-month service contract with Taser International that's expected to cost $9.4 million, plus two 12-month extension options totaling an additional $2.7 million. Initial deployment would put 500 BWCs (likely Taser's Axon 2s) on Austin officers, with 500 additional cameras hitting the street the next year, 500 more the year after that, and 200 more in the fourth year. APD currently has 1,737 commissioned officers on its force.

Based on the evaluation matrix that accompanies the city's service request for cameras, Taser scored the highest of any company that submitted a bid to outfit Austin's patrol officers. The Arizona company scored 10 points higher than its closest competitor, Utility Associates, with notably high marks in function match, hardware support, and staff availability. It scored second in pricing behind Utility among the four scored on the matrix to provide a better pricing model.

Taser's tendency to sell law enforcement agencies cameras at a low cost only to profit off pricey data storage plans is well recognized. In many cities, thanks to the thousands of hours of footage BWCs record, storage has accounted for roughly five times the cost of equipping officers, acknowledges Taser CEO Rick Smith. As Grits for Breakfast writer Scott Henson noted in April, there do exist other options. State Department of Information Resources COO Dale Richardson recently told the Texas House of Representatives' Emerging Issues in Law Enforcement Com­mittee that his department is working on reformatting the state's two data centers to handle BWC storage for local agencies in a nonprofit capacity, at a cost of $50 per camera per month. (Beyond cost, questions have circled concerning the propriety of contracting with Taser, which has been criticized by both Amnesty International and the United Nations Human Rights Committee for the effect its most prominent product – the Taser electroshock weapon – has had on modern policing. Between 2001 and 2012, according to AI, more than 500 Americans died from Taser shocks administered by law enforcement.)

Despite the high marks on the matrix, it's tough to tell right now what the city is getting with these cameras. APD policy, as outlined in a seven-page modification to their employee handbook, champions the cameras as providing "an unbiased audio/video recording of events that employees encounter." The department considers the cameras useful for documenting evidence, preparing offense reports, aiding court testimony, protecting officers "from false allegations of misconduct," and "debriefing incidents or evaluating performance."

Officers have been directed to commence recording when they arrive on a scene, have detained or arrested a person, or are attempting to detain or arrest a person. They can stop recording when an arrest has been made and the arrestee has been transported to Travis County Jail, or when no other law enforcement action is to occur. As with many police operating procedures, those pertaining to BWCs tend to function on a sliding scale. "There may be instances in which an officer is required to take immediate action to an event that occurs directly in front of them which may not allow time to activate their BWC," reads the handbook. "In those situations, it may be impractical or unreasonable for employees to activate their BWC system before taking police action. It is expected that once the immediacy of the situation is over, employees will activate their BWC system to record the remainder of the incident. Officers will need to articulate the reasoning for the delayed activation of their BWC."

The department details that cameras will be used during traffic stops, foot pursuits, DWI investigations, issuing warrants, investigatory stops, or any contact with civilians "that becomes adversarial." Recorded footage can be used by officers in five instances: to make sure the system is working; to assist with the writing of a report, supplement, or memorandum, or prior to making a statement about an incident; for the purpose of reviewing evidence; by supervisors investigating acts of employee conduct; and by department personnel participating in an official investigation.

Policies concerning a civilian's ability to view that same footage are currently far less clear. Monday, May 23, at a Public Safety Committee meeting, APD Technology Com­mander Eli Reyes admitted the policy "does not go into specific details" about open records requests. He said the current policy, as scripted by APD, aligns with Senate Bill 158, a law passed during the 84th Legislature that stipulates standards a city must meet with its BWC program before becoming eligible for a state grant. Release of information under that law requires that requesters provide a date and approximate time of the event in question, a specific location, and the name of one or more people known to be a subject in the recording. Any recording that occurs in a private space cannot be released without written authorization of the person in the video.

BWC video from critical incidents, like any officer-involved shooting, will be handled the same way that APD and the Travis County District Attorney's Office currently handle similar incidents captured by dashboard cameras. Reyes pointed to the February shooting of David Joseph – and the May decision by a grand jury not to indict former APD Officer Geoffrey Freeman for that death – as a case study on releasable footage: The D.A.'s office waited until Freeman was no-billed and the investigation into any potential criminal conduct was concluded before dashboard camera footage was released.

Reyes attempted to assuage concerns about current BWC operating procedures by telling the PSC that the policy remains "a living, breathing document" at APD. He said the department has a policy review committee that meets monthly, and that APD has already taken feedback from the community: ACLU policy strategist Matt Simpson, the Texas Criminal Justice Coalition's Kathy Mitchell, and the NAACP's Yannis Banks. Reyes said that APD incorporated two suggestions from Simpson, Mitchell, and Banks into its policy. Mitchell countered with the specific circumstances of that meeting: The stakeholders were given one opportunity to sort through the language, but weren't able to take the proposed policy home. "Our best ideas probably came after we walked out the door," she said.

Most pivotal to critics of the current policy is not what should be done to release videos in the interest of the public, but in the interest of each specific person. BWCs first came into the picture as a way to increase accountability for both police and civilians. However, while APD's current policy allows officers to review footage to make sure their story is straight before testifying in court, scripting incident reports, or providing official statements, civilians involved in an arrest or other contentious incident (about which they may have filed a complaint with the Office of Police Monitor or Internal Affairs) won't be allowed to view the footage. (For a fleeting moment, PSC chair and chief conspiracist Don Zim­mer­man made sense: "If [an] officer has a right to review the recording before they make an official statement, shouldn't you have the right to review a recording before you make a statement?")

Opponents of APD's plan have recommended an opt-in policy for arrestees and detainees, where they can tell the officer they're dealing with that they'd like for the video taken of the incident to be releasable to the general public. There's also the question of what to do with footage of a person who's simply a bystander, or not a person of interest. If an officer is filming a pursuit on Sixth Street and just happens to film an ancillary event (like, say, a drunk doing something embarrassing), should that clip be releasable, against that person's wishes?

All that remains up in the air. Hopefully, by the end of June 9's discussion, Council will recognize all the intricacies and unsettled questions of this vote.