The Downtown square will get a face-lift and new management 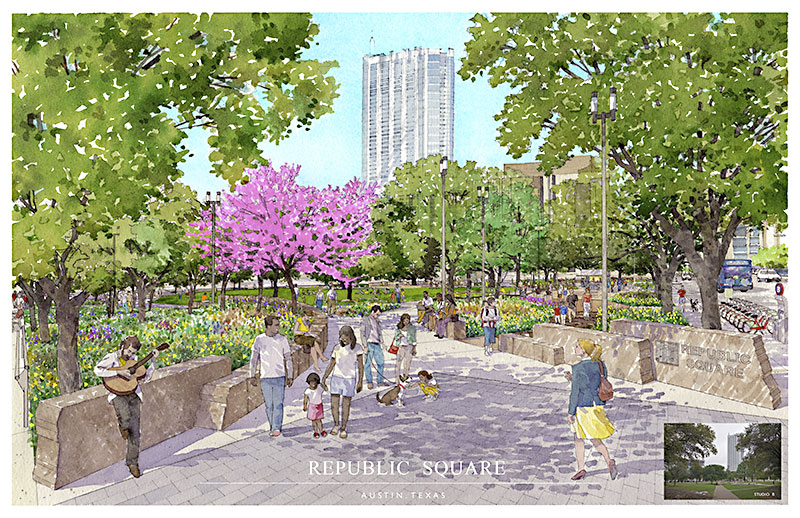 A mock-up of the renovated park

The Auction Oaks on the west side of Republic Square Park have played witness to multiple eras of Austin history. In the 1830s, the city's first lots were sold at auction beneath their branches. In the Fifties, the oaks stood defiant when the rest of the square was paved for parking. More recently, they've sheltered patrons at the Sustainable Food Center's Farmers' Market Downtown.

Over the next year, the trees will watch as the park itself is transformed. When Republic Square reopens in spring 2017, visitors will be able to grab coffee or lunch at an on-site concession building, wash their hands in a new restroom, enjoy their repast gazing over an expanded lawn, and contemplate art that honors the park's history. The park's almost $5 million upgrade is the result of a partnership among the Parks and Recreation Department, the Austin Parks Foundation, and the Downtown Austin Alliance – the first agreement of its kind in the city.

Groundwork for the revamp began in 2012 when a new master plan for the park was developed by local landscape architecture firm Design Workshop and interested citizens. But, like many master plans, the final document didn't come with the funding to turn it into reality. Even if the city had had money allocated for the construction, the ongoing operational cost of a park of its caliber would be at least $300,000 per year. In contrast, PARD currently spends about $10,000 per year maintaining Republic Square.

"Austin is blessed with an abundance of parkland, but the challenge is we don't take care of it very well," says Colin Wallis, executive director of the Austin Parks Foundation. "We don't spend, per capita, the kind of dollars that cities that have great parks spend."

But, at the same time the master plan was being developed, the Parks Foundation and the Downtown Austin Alliance met with Tim Marshall, an open-space consultant and former vice president of New York's Central Park Conservancy, to figure out how a public-private partnership could revitalize Downtown green spaces. As a result of both processes, the Parks Foundation volunteered to raise money – about $3.3 million – to make up the difference between the construction price tag and the funds available through the city. (The foundation is currently about $750,000 shy of its goal.) The remaining money would come from sources including parkland dedication fees, Capital Metro, the Great Streets Development Program, the 2012 bond, and the federal government, which paid the city for closing San Antonio Street between the park and the federal courthouse.

During construction, the farmers' market will move to the federal courthouse's plaza and nearby streets. Once the construction is complete, the Downtown Austin Alliance will take over the operations and management of the park until at least 2030. Its work will be funded by private donations, a contribution from Capital Metro, possibly city money, and revenue from the park concession and events, as well as interest income from a million-dollar endowment that's included in the project's $5.8 million total cost. The money will pay for upgrades including an on-site attendant who can keep the restroom and seating areas clean, and additional programs like yoga and movies.

As a result, Wallis says, "I think we're going to see a park that is so much more lush and beautiful on a daily basis than any other park space in Austin."

Downtown development makes the need for spaces like Republic Square even more acute. The master plan notes that there were fewer than 400 dwelling units within a quarter-mile of the park in 2000; 10 years later there were 1,500, and the number continues to grow.

"Having public space for the people who live or work here is so important," says Melissa Barry, the DAA's vice president for planning, "not only for mental or physical well-being, but to keep us relevant as a city." 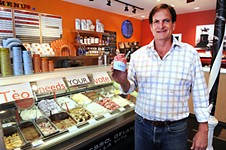 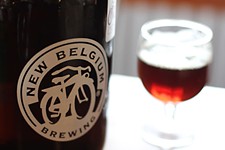