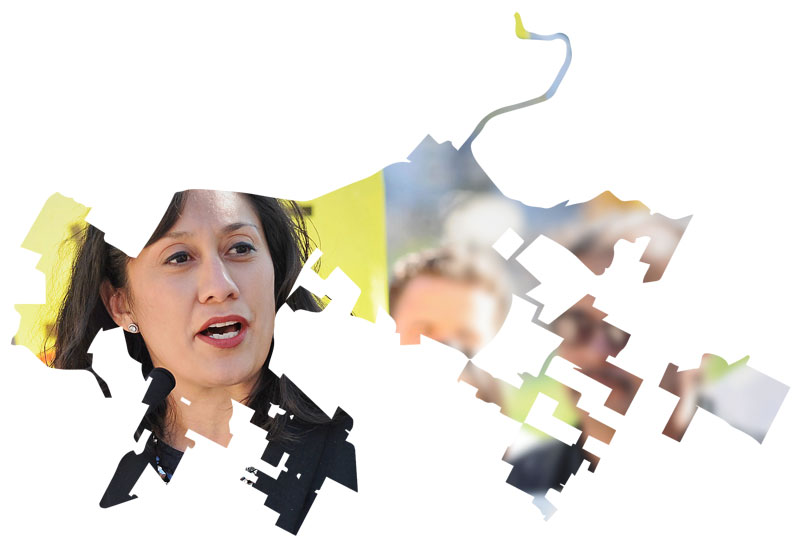 District 2 Council Member Delia Garza served on the charter revision committee that brought 10-1 to Austin in 2012, and since her inauguration, the former firefighter and assistant state's attorney general has embodied the spirit of equal representation. She currently chairs the Public Util­ities Committee, serves as vice-chair of the Open Space, Environment, and Sustainability Com­mit­tee, and sits on the Mobility and Health & Human Services committees.

The same energy Garza brought to the 10-1 committee has made her one of the most prominent and vocal council members currently on the dais. She's an avid proponent of gender equality, recently working with Mayor Pro Tem Kathie Tovo to strengthen the city's discrimination complaint policies. She's also been vocal in her support for Planned Parenthood, taking to the Austin American-Statesman's editorial page last October to write an account of a time she benefited from the clinic's services, and last fall proposing a resolution that the city fund Planned Parenthood despite the state government's efforts to cut the organization off. Garza has helped bring a number of new health benefits to city employees, notably advocating for coverage for applied behavior analysis (a largely successful, albeit controversial, treatment for autism), and allowing more part-time employees to be eligible for health insurance.

The oft-disregarded southeast region that Garza represents serves as a prime example of why the city needed to restructure its council. She has worked to increase the well-being of less affluent residents in her district and throughout Austin, throwing her support early in the spring behind creating healthy and sustainable food options in areas where they're absent. Last June, when Council took up the topic of the homestead exemption, she wrote in another Statesman op-ed that the proposed 6% rate catered only to Austin's wealthy residents "with little, if any, benefit to the very population that struggles the most with our affordability crisis." And she returned from maternity leave two weeks after having her daughter specifically for the purpose of calling the proposed exemption inequitable.

Garza has continually sided with efforts to increase affordability. Recently, despite concern from her fellow council members (as well as a number of media outlets) over the increasing cost of the Pilot Knob PUD, she's stood firm in her support for the project, saying that the affordable housing options the proposed development will bring to Southeast Austin (650 of the 10,000 units would be permanently affordable, and 350 would remain affordable for 40 years) would be worth the cost. She's also worked to improve accessibility and mobility around District 2, advocating for the implementation of bike lanes on major thoroughfares and new sidewalks where needed.

"One of the most active parts of my district is the Armadillo neighborhood," she said. "Because of 10-1, they've formed their own association. Del Valle already had a neighborhood association; they've been very grateful for meetings. There are a couple big developments going in where people can voice their concerns. It's not as much as I hoped it would be, but a reason for that is that we are a working-class district. We're busy."

On the transportation network company issue, Garza was outspoken against the threatening corporate overlords, advocating instead for fair and local labor practices. She blasted this winter's Ridesharing Works for Austin petition, saying she was "deeply disappointed in the perversion" of the endeavor, and accused the group of "disseminating false information to get signatures." And in a Facebook post following the election, she wondered aloud how a movement that collected more than 65,000 signatures would only bring 23,000 to the clerk's office to force an election, then bring a measly 39,000 to the voting polls. "I've been out there pretty hard," said Garza, weeks before the May 7 election. "I was surprised that I didn't get attacked the way that Council Member Kitchen got attacked. I've talked to folks who say it's probably because I have a two-year term, and if they want to get me they can get me in this election."

However, Garza was elected in Nov. 2014 after a swift campaign that easily disposed of two challengers – both of whom filed just before 5pm on the deadline date – and has yet to attract an opponent in November's election. That wouldn't be the worst thing. Advocates for fairness, equality, and affordability will be well-served with her remaining on the dais.

This article has been updated to correctly identify the gender of Garza's child.