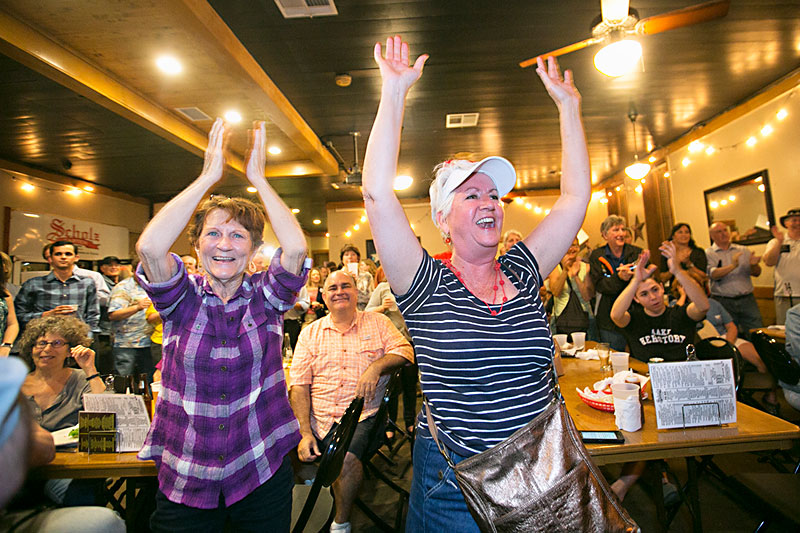 Opponents of Proposition 1 gathered at Scholz Garten on Sat., May 7, to celebrate its failure. Uber and Lyft's political action committee, Ridesharing Works for Austin, spent roughly $10 million on the special municipal election, only to have its proposal rejected soundly by voters. (Photo by Jana Birchum)

The dust has not yet settled on Saturday's Prop 1 election, with Uber and Lyft exiting stage right, a quixotic lawsuit to overturn the results, legislators grandstanding and swearing 2017 vengeance against Austin voters, and a mayoral effort to find common ground to save ride-hailing in Austin.

You haven't voted enough: Democratic and Republican primary run-offs take place May 24, with early voting May 16-20. There are three races on the Dem side, with the Precinct 1 Commis­sioners race likely to draw the most interest. See "Slinging Mud: Sampson vs. Travillion," May 13.

Officials in West declared Wednesday that the West Fertilizer Company plant explosion, which killed 15 and injured more than 160 in April 2013, was a deliberate and criminal act of arson. No arrests have yet been made. Officials said that an excess of 400 interviews have helped generate leads. The Bureau of Alcohol, Tobacco, Firearms and Explosives is offering a $50,000 reward for information that leads to an arrest.

Out, in, out again: Texas' Sen. Ted Cruz announced on Glenn Beck's radio show that if he won the May 10 Nebraska Republican presidential primary, he would reanimate his campaign, which he suspended after losing in Indiana. He then lost Nebraska, however, taking only 18.4% of the vote.

Lt. Gov. Dan Patrick is bullying Ft. Worth ISD Superintendent Kent Scribner into resigning after the school official approved guidelines that protect transgender students. Patrick criticized Scribner's professionalism, said the incident was another example of why the Lege needs to pass a school-choice bill, and held a press conference Tuesday to reiterate his call for Scribner to quit his post. Scribner said he has no plans to step down, and that he's "proud" of the inclusive rules.

Embattled Attorney General Ken Paxton is in a feud with The Dallas Morning News after an unnamed source in his office went to Breitbart to accuse one of DMN's writers of "stalking" staff. The DMN editorial board fired back that Paxton should answer legitimate questions about abuse of administrative leave payments.