Cab Drivers Look Toward the Future 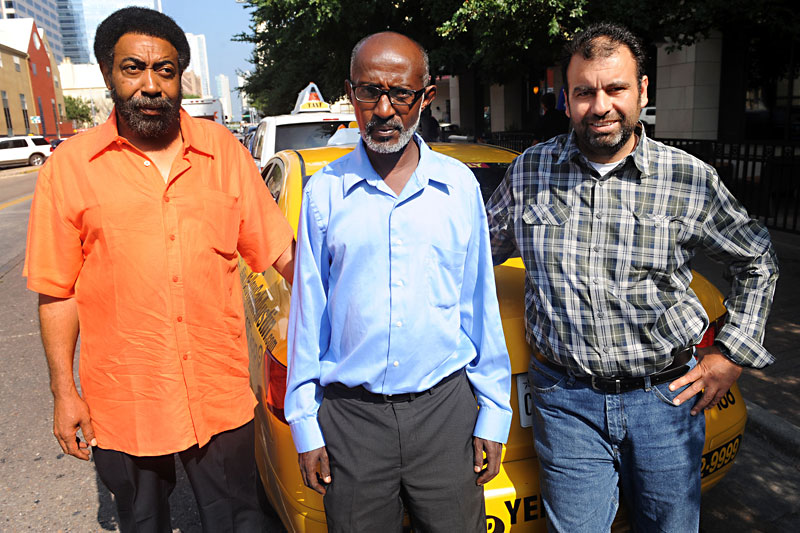 Two days before the May 7 election, Nega Taddesse was predicting victory: "The outcome's going to be positive for us. This is a good grassroots movement. It's become a public issue rather than Uber against the taxi drivers."

The longtime cabbie, who immigrated to Austin from Ethiopia by way of Canada, had spent the weeks in advance of Saturday's vote posting anti-Prop 1 signs around North Austin, and making phone calls to other drivers. The local union Taxi Drivers Association of Austin has seen membership grow from around 150 to more than 600 in the past year. (Company representatives were reluctant to say how many drivers they're currently contracting. The Trans­port­ation Department reported 815 taxi drivers in the city.) As a recently elected board member, Taddesse is responsible for keeping the TDAA membership clued in. He said that he worked to provide support to Our City, Our Safety, Our Choice, sending a donation on behalf of the association as well as $25 from his own pocket. He said, "A lot of drivers did that."

Drivers in the TDAA are optimistic for the future of their enterprise as well. Last May, City Council approved a resolution directing the city manager to recommend a new, fourth taxi franchise: a cooperative, to be owned and operated by the drivers. The TDAA, before then a consortium of disenfranchised drivers – mostly immigrants – shouting with little success for better rights from the three franchises (Yellow Cab, Austin Cab, and Lone Star Cab), escalated into a body that could get its seat at the big table. The TDAA submitted its application for the co-op in early March. City staff has already recommended that Council adopt the association's proposal.

Should the TDAA receive approval, it'll assume ownership of the operation ATX Co-op Taxi. From there, Council will have to decide how many permits to grant the co-op: The Transportation Depart­ment has recommended 150; the Urban Transportation Commission, which advises Council on these recommendations, has suggested 548. Taddesse says that association members would still have ownership stakes and the opportunity to vote on co-op issues even if they don't drive for the co-op. But right now it's unclear how permits will be distributed among TDAA membership. Regardless, it may not be long before the city gets itself a brand new franchise, one for which drivers will finally have a stake in the success and bottom line.

Taddesse said the association is working with the National Taxi Workers Alli­ance to onboard a version of an app used by cab drivers in New York and Phil­adel­phi­a, and he anticipates a renewed energy once the co-op gets going.

"Uber is a curse and a blessing for cab drivers," said Taddesse. "Because Uber penetrated this market unfairly and pretty much hurt everybody: cab drivers and cab companies. Because of that, everything about the industry has come up to the public – which probably no one knew about. We've been liberated. Before, the association used to be only about fighting the companies. Now it's about competing with the companies."

It's anyone's guess as to whether the three franchises are ready to wage battle. Ed Kargbo, president at Yellow Cab Austin, declined to comment, saying that Saturday's vote had nothing to do with the taxi industry, and Lone Star's line was busy each time the Chronicle called. Ron Means, GM at Austin Cab, said that his company, which has 237 permits, hasn't been able to contract out the 50 additional permits that Council granted to it last summer, and he believes that Lone Star and Yellow are also reeling. He said he recently cut his permit fee for drivers from $255 a week down to $200 because Lone Star reduced its weekly fees, attracting old Austin Cab drivers.

"That has to do with the city promising that they're going to let the drivers have a co-op. It's a fear," Means said. "It's going to be sink or swim," he said. "Divide up. It's messing up everything."

Indeed, the longstanding three-pronged monopoly of cab companies within Austin might lose way more of its market share than what's going to the co-op. Wednesday morning, via a memo delivered to City Council, Trans­port­ation Department Director Robert Spil­lar revealed that his staff has been meeting with stakeholders and plans to propose a set of "substantial changes" to the taxi industry that would essentially render irrelevant the "overall regulatory scheme" by which the industry currently operates within the city.

"A transition from the current system of managed competition to an open entry system would provide a truly competitive marketplace," wrote Spillar. "This would require the city of Austin to abandon the taxi franchise model for an operating authority system. The final step of that transition could be to revoke the existing franchise agreements after all operators are conforming to the new operating authority approach." He clarified that the co-op – technically a franchise under the current regulations – would become an "operating authority" alongside Yellow, Austin, and Lone Star (and frankly, anybody else wanting to start a cab company in Austin, Uber and Lyft included). He said that two more stakeholder meetings are scheduled, and his department plans to present a proposal to the Urban Transportation Commission on June 6, and to Council's Mobility Committee on June 14. He's hoping to get the proposal on a Council agenda by Aug. 4.