The plan to grant Rosewood Courts historic designation is coming along slowly, residents learned during a community meeting in East Austin last week.

Since Council passed a measure in Feb­ru­ary to initiate historic zoning on the nation's first public housing complex for African-Ameri­cans, stakeholders have held two meetings to discuss the proposed plan ("Living History," March 25). The resolution, sponsored by District 1 Council Member Ora Houston, is expected to prevent building owners, the Housing Authority of the City of Austin (HACA), from moving forward with their redevelopment plan to increase the number of housing units and make upgrades to the aging complex due to limits on construction the designation carries. Roughly 60 residents, city planners, architects, and civil engineers gathered at Mt. Olive Baptist Church on April 27 to continue the debate.

Led by UT-Austin professor Richard Red­dick and urban designer Laura Toups, the conversation began with residents expressing complaints about the decades-old property – including mold, the lack of A/C, and sparse nighttime lighting – as well as the plans to redevelop, with one group of residents arguing that construction and displacement would adversely affect the elderly. Tension hit a peak when Fred McGhee, head of Preserve Rosewood and vocal opponent of the HACA plan, cast doubts on the probability that displaced residents would actually return to the redeveloped property. McGhee cites Edward Goetz, director of the University of Minne­so­ta's Center for Urban and Regional Affairs, who documents low resident-return rates in cities that have similarly redeveloped public housing. In his 2013 book, New Deal Ruins: Race, Economic Justice, and Public Housing Policy, Goetz says national studies estimate that 14-25% of original residents make it back to the new site. Deeming the HACA plan rife with "pie in the sky" promises, McGhee's caustic commentary prompted Toups to request he refrain from expressing his "growing mistrust" of the city's housing authority.

Politics (and hostility) aside, the issue is a valid concern, striking anxiety in some tenants. "Are we really going to be able to come back? I don't want to be one of those statistics," said Dennis Tyson, an eight-year Rose­wood resident. HACA President Michael Ger­ber said a binding written agreement would be developed with Texas RioGrande Legal Aid and the Austin Ten­ants' Council to ensure residents are protected and given priority to return. Lawyers will "get everything in writing," he guaranteed. (A call to Texas RioGrande Legal Aid confirms HACA has signaled serious interest in the right-of-return agreement, a common practice for public housing aiming to redevelop.)

By meeting's end it was clear that some apprehension among residents and stakeholders remains, and several questions are still on the table. (Moderators sidelined an attempt to poll residents on whether they supported the HACA plan – which designates six buildings as "historic" – vs. full historic zoning, saying it was "too soon" to ask.) While the idea was to bring the measure before the Historic Landmark Commission in May, Jerry Rusthoven with the city's Planning and Zoning Department announced that the need for more dialogue has pushed those plans back into the indefinite future. And in turn, HACA's plans to apply for $30 million in federal housing funds to redevelop the site, up for grabs in June, are also pushed further out of reach. 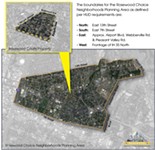 What's Next for Rosewood?
The transformation of Rosewood Courts is the centerpiece of a larger neighborhood plan