Ott and Acevedo at Odds 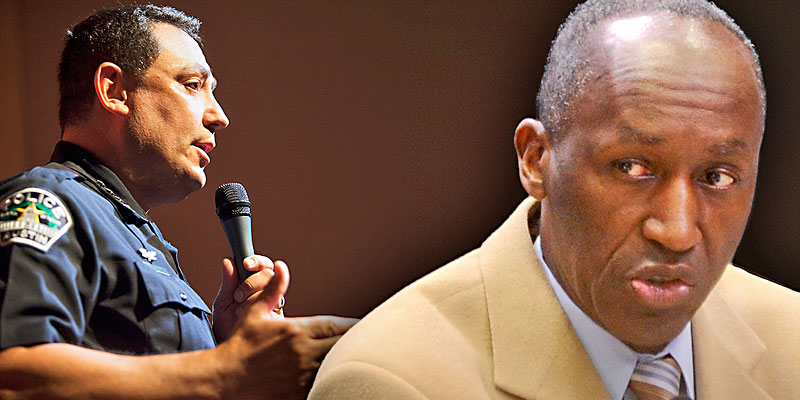 Last Wednesday, after news broke that City Manager Marc Ott had issued a public memo disciplining Austin Police Depart­ment Chief Art Acevedo for insubordination, a longtime city employee provided a day-after autopsy: "One would assume Marc Ott is being reckless, or gambling," the employee advised. "But Ott's a city manager. City managers, in my experience, tend to bet on sure things."

To review: It was late on Tuesday, April 26, that word got out that Ott had issued a memo on April 15 docking five days of the chief's pay (roughly $4,000), requiring Acevedo to get approval in the future for work-related travel, and warning him further insubordination would put his job in jeopardy. Acevedo, Ott wrote, had failed to adhere to Ott's orders that he keep his mouth shut about February's fatal shooting of David Joseph by then-Officer Geoffrey Freeman. On March 1, the Austin Police Association made a verbal complaint to the city manager stating that the chief had discussed the shooting while visiting a cadet class. On March 2, Ott met with Acevedo, telling him to stay quiet about the case until Internal Affairs concluded its investigation.

Acevedo didn't. Instead, he went to APA President Ken Casaday and said he wanted to clarify his comments to the cadets and their training officers. He made his second visit to the academy on March 4. Three days later, the APA delivered a written complaint to Ott requesting that a third-party investigator look into what it claimed were Acevedo's efforts to "undermine the state approved Police Academy training" and "improperly influence the training personnel" in the wake of February's shooting.

Acevedo's account is slightly different. In a two-page response to Ott's memo, he argued that the discipline was based on "a series of misunderstandings as to both the actions taken by me and the intent of those actions." The chief acknowledges that he met with a class of cadets and spoke to them about "law, policy, and tactics governing use of deadly force" (something he alluded to in the March 25 Chronicle story "Officer Who Killed Teen Fired"), but said the meeting with Casaday was a "brief" and "incidental" back-and-forth following Ace­vedo's introduction of former lieutenant Frank Dixon as APD's newest assistant chief. Acevedo noted that he told Casaday that he'd like to return to the academy the following day to make sense of any confusion concerning the department's policies concerning use of force. Casaday acknowledges this, but told the Chronicle that he wasn't aware at the time that Ott had directed Acevedo to stay mum.

The chief said he tried to contact Ott before returning to the academy, but that Ott was unavailable. He said he spoke with Assistant City Manager Rey Arellano about his plans to revisit the cadets after Arellano got a call from the APA, and that Arellano said Acevedo could make the appearance so long as he remained "mindful of Ott's direction" and reported back to Arellano following the meeting. Arellano did not respond to multiple requests for comment from the Chronicle about the consent he allegedly gave to Acevedo.

It's hard to tell who's really driving this – Ott or the union. It's clear that Casaday's complaints served as the direct impetus. APA has been publicly at odds with the chief since days after the Joseph shooting, when the APA held a press conference to decry Acevedo's actions (meeting with police accountability activists, saying that an IA investigation would be concluded within 30 days, and inviting activists to speak at a police press conference). Casaday, however, told the Chronicle: "Ott took this because he's seen problems in the past."

Indeed, Ott's disciplinary memo makes mention of Acevedo's past behavior – "operation and judgment concerns documented in my August 11, 2011 memorandum." (A public information request for this memo had not yet been returned as this issue went to press on Wednesday; but we note that Byron Carter Jr. was shot by APD Officer Nathan Wagner that May.) But many believe that Ott may also feel played by Acevedo, who last September received a 5% salary hike and a new, six-month severance package to stay in Austin after it was announced that he was a candidate for San Antonio chief. Ott's revocation of Acevedo's ability to travel without prior approval has also aroused suspicions.

In the past, both the APA and Ott have praised Acevedo for his ability to communicate with the community after officer-involved shootings. "One of the main problems we had before [Acevedo] got here was with critical events, and not letting critical events fester – both in the Department and the community," Casaday told KXAN in August, when news of Acevedo's potential departure for San Antonio first hit the press. Ott followed in the Austin American-Statesman two weeks later: "Law enforcement is being challenged. That's not me expressing an opinion ... that's just the way it is. I think Chief is a good person to have that conversation."

In fact, since Joseph's death, Acevedo has continued to speak publicly about officer-involved shootings. On April 3, after Officer Armando Perez shot and killed Darrin Andrew Martin in the Frank & Angie's parking lot Downtown, Acevedo told the press that he was "really looking forward to the day that we can release this video." He provided similar perspective after the April 14 SWAT raid in North Austin, then again on April 22 when Officer Matthew Paredes shot Tyler Hunkin in a South Austin Randalls parking lot. "When somebody's running full-speed with two knives at a police officer, there's a good chance you're going to get shot," Acevedo said that night during a press briefing. "Based on what we've seen so far at this scene, this appears to be a phenomenon we call suicide by cop."

That willingness to speak candidly about critical incidents in their immediate aftermath has brought him credibility with some calling for police reform. Meme Styles of Measure Austin spoke in the chief's defense shortly after the discipline was made public: "Chief Acevedo does have a big mouth, and everybody knows that. He speaks his mind. What's even bigger is his heart."

Further complicating matters is the news that Acevedo is now a candidate for Hous­ton Chief of Police. Acevedo denied any active involvement, telling the Chronicle he has neither applied for the position nor contacted HPD about the vacancy. (Former HPD Chief Charles McClelland, who retired in February, was earning $275,000 annually, $50,000 more than Acevedo's current salary.) But by Saturday, after Acevedo reportedly addressed those in attendance at the Distinguished Awards Gala with a line reflecting on the length of his local tenure, officers who spoke with the Chronicle were actively wondering if their chief was about to depart.

Right now that's not happening. A source tells us that Mayor Steve Adler questioned Ott about the imminent possibility of the manager firing Acevedo, and Ott denied having any intention of doing so. However, it's well-known that Ott gave the mayor and Council very little advance warning of the April 15 discipline – a decision that rankled Council and moved District 6 private eye Don Zimmerman to call for an investigation into Ott's actions. It's also possible he has a reason for waiting, whatever that may be. As noted, it's unlike a city manager to bet on an unsure thing.