As May arrives, City Council moves into seasonal overdrive, although you might not know it by today's agenda (May 5). Apart from the mere 51 Items officially listed – including six public hearings, any one of which could generate extended heartburn – budget season has begun, with two budget work sessions already concluded, and plenty more where those came from.

But first, a preview of the likely dustups today, derived in part from what most preoccupied Council at Tuesday's work session: water, and watering.

Items 3 and 4 arrive courtesy of Austin Water, the first being a proposed ordinance that would revise watering restrictions, the second a resolution that would adopt the city's "Drought Contingency Plan" covering primarily retail and wholesale water suppliers, but addressing a wide range of water planning. AW Director Greg Meszaros was on hand to deliver a briefing on both matters, but was quickly embroiled in a lengthy exchange with Council Member Don Zimmerman, who demanded to know why, with the Highland Lakes currently filled to capacity, we hadn't already moved away from Stage 2 watering restrictions (effectively one day a week) to at least two days (if not to watering on demand).

Zimmerman was seconded by CM Ellen Troxclair, who argued that she and many of her constituents had installed automatic sprinkling systems precisely because of their convenience in both timing and hands-off operation, and didn't appreciate being advised (as the proposed regulations recommend) that a second watering day (if allowed at all) would be handheld hoses only. "So even if it rains every day for the next 10 years," lamented Troxclair, "there's going to be no structure in place to ever allow anyone in Austin to automatically water their lawns two days a week."

The mild-mannered Meszaros responded at length to both CMs (as well as questions from other quarters), perhaps a little mystified by the short memories of his chief accusers. It was only a couple of years ago that the entire region was locked in a years-long drought, and Meszaros reminded the room that in Central Texas, drought conditions are much more common than floods – even if the floods garner the panic and the headlines. Zimmerman was having none of it, charging with reflexive ill humor that the city's policies had moved from "conservation" to "social engineering and behavioral change."

Meszaros pointed out that in the utility's (unscientific) survey of residents, six of the 10 districts reflected pluralities in favor of maintaining one-day-a-week watering restrictions. Zimmerman responded that his northwest District 6, along with residents of D8 and D10 (who represented nearly half of the survey's respondents) showed strong majorities against it, and he attributed that sentiment to the thinner western topsoils that hold less moisture. (Are large lots and expensive landscaping also more common on the wealthier west side? Zimmerman didn't say.)

After about an hour, Zimmerman relented, predicting there would be "much more to say" about the matter in today's meeting.

There were also lengthy exchanges during the day's second briefing – a progress report on the drafting of CodeNext, the major revision of the city's land use ordinances. Zimmerman denounced "central planning," but more questions came from the traditional neighborhood defenders (Mayor Pro Tem Kathie Tovo, and CMs Ora Houston, Ann Kitchen, and Leslie Pool), generally concerned that 1) changes perhaps leaking into the draft would too readily allow overdevelopment, because 2) there is insufficient transparency built into the process. Despite reassurances from staff, the consensus seemed to be to bring back proposed recommendations more quickly to Council, for further review. Imagine, Austin. Other agenda highlights:

• Item 17: a proposed $300,000 contract (and two extensions) with Emmis Broadcasting or another provider for "tobacco prevention and chronic disease media services" – expect huffing and puffing over the cost.

• Item 21: a $110,000 contract for furniture for the new central library (a frequent Zimmerman punching bag).

• Item 27: a resolution directing staff to review/revise Austin Police Department policies and training "to improve how transgender and gender-nonconforming individuals are identified." 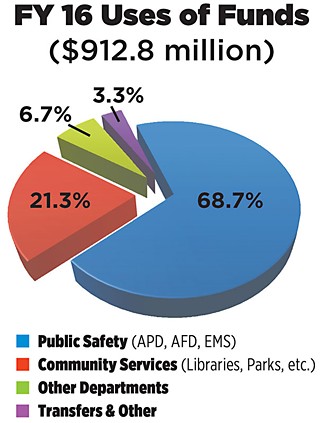 The Fiscal Year 2017 city budget cycle began last week with an April 27 Council work session, and resumed May 4 with more of the same. We're at the forecast and briefing stage – consultant Jon Hockenyos traditionally presents a city and regional economic forecast, and city staff presents gross budget numbers based on what's already in the financial pipeline. Council asks questions based on those numbers, but it won't be until July that City Manager Marc Ott presents a proposed budget, based on updated revenue numbers and on intervening policy decisions.

Hockenyos' presentation was predictably upbeat, to the point that he cautioned that Austin's good fortunes – business cycles and external factors being what they are – simply cannot last forever, yet summarized the persisting prosperity: "Austin arguably has been the regional economic star in the United States since the recession, a fact confirmed by upward revision of employment figures for the past several years. Strong economic performance is anticipated through 2016 and 2017."

Virtually all his projections were positive, though he did note that national economic growth appeared to be slowing to perhaps a relatively anemic 2.5% annual rate, with Central Texas closer to 5% in employment and income growth. More troubling, though, is that the general prosperity has not been equally shared; "Austin remains highly prosperous overall," Hockenyos noted, "but the divisions in the community are widening." The 2014 poverty rate among Austin Anglos was estimated at 10.8% (roughly static since 2009's 10.9%), but for minority residents it's higher and rising: Asians (15.8 from 15.5%), African-Americans (26.8/26.4%), and Hispanics (29.6/25.5%, a particularly sharp jump). The census statistics confirm what has become a persistent political discussion at Council.

Hockenyos was followed by the annual staff presentation (primarily Deputy Chief Financial Officer Ed Van Eenoo), which began with an emphasis on "structural cost drivers" – that is, additional expenses already built into the budget because of 1) previous Council decisions, or 2) generally rising costs. The former category totaled $29.1 million, and included:

Van Eenoo also identified another $27.5 million in "cost escalators," including:

• Fire overtime increases (as we wait for cadets): $3.1 million

The projected total is $56.6 million, and that's before any potential Council initiatives like another bump in the homestead exemption ($9.1 million), projected boosts to Health and Human Services ($8.3 million), increased funding for Development Services ($1.1 million), and so on (staff is guessing about $19 million in that grab bag).

It was a sobering intro, and Ott's transmission memo noted that much depends on Council's policy decisions, which they began to discuss this week. Among the list prepared by staff (for Council supplementation) were: civilian wage decisions, tax rates/exemptions, and utility rates/affordability. That discussion began Wednesday, the leading tip of an iceberg that will loom weekly through June 1. Expect a busy month.