AISD Salaries Up for Debate

Union asks for 4% increase this year and next 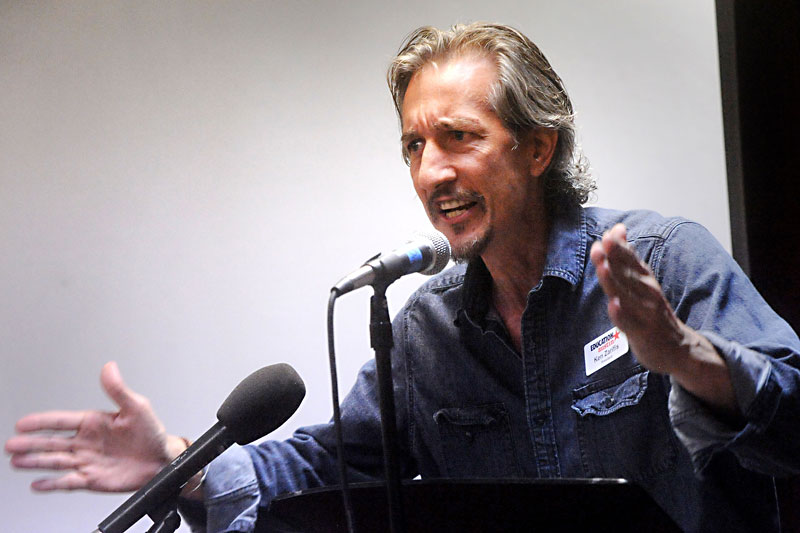 This year, the Austin Independent School District will see its local revenue rise by over $140 million because of soaring property evaluations. And although $133 million of that is going straight to the state under recapture (see "AISD Proposes a Budget," April 29), the district is considering implementing higher minimum hourly wages as well as an across-the-board pay raise. Yet as the cost of living goes up in Austin, there is concern that the proposed increases won't offset inflation, nor keep teachers in the district.

At the April 25 board meeting, Chief Finan­­cial Officer Nicole Conley presented the draft $1.3 billion budget for the 2016-17 school year. In it, the administration proposes two salary changes: a 3% across-the-board pay raise for all staff, and a $13/hour minimum wage. The raise will be the second biggest driver of the budget increase this year, with a price tag of $15 million. Add on the minimum wage increase, worth another $1.4 million in employee salaries, and the district is looking at an increase of $16.4 million in spending on pay.

But Education Austin President Ken Zarifis argues that it's nowhere near enough. The union has a counter-proposal that it's calling "four and four" – a 4% raise for all employees for the 2016-17 school year, with a guarantee of a 4% increase for 2017-18. If the board can't deliver that cumulative 8.16% increase over two years, the union is asking for 5% this year.

Zarifis argues that the money is there. "We've done 3 percent when things were really hard," he said. And the district was already proposing a 3% raise before the county reported a 15% increase in appraisals. Now that the draft budget has gone from a $24 million deficit a month ago to a $15 million surplus, the district is obligated to give something back to teachers who see their own tax bills rising. Zarifis said, "That money must go into the system and into their pockets."

If the board goes ahead with the administration's plan, this would be the third consecutive year with a pay raise. In 2014, after several years of wage stagnation and one-off payments, salaries rose 2%, followed by a 3% boost last year. Given the stagnation of wages in general, those increases may seem like a lot. However, during public comment at the April 25 meeting, the board heard the bleak numbers from staff, including stories of second jobs and housing woes. Crockett High School library clerk Chantel Ullrich explained that last year's 3% raise meant $6.80 a month extra on her paycheck after taxes. Even though Ullrich is a full-time employee of the district, she's still eligible for food stamps.

Moreover, AISD's salaries have lagged behind those of surrounding districts and comparable large urban districts in Texas for years, and it's only getting worse. As the cost of living in Austin goes up, working in surrounding districts gets ever-more appealing – especially as staff find themselves more likely to be pushed out in dormitory communities (that exodus is part of the reason the district has started discussing turning some underused facilities into affordable housing). Crockett head soccer coach David Dupont put it simply to the board: Noting that many teachers at South Austin campuses are now living in Kyle and Buda, he said, "To afford to live in Austin, you have to leave Austin."

Zarifis said he doesn't blame the board for the soaring cost of living in Austin. But he argues that it's their responsibility to respond to it, and he's already seeing some support. Trustee Gina Hinojosa told staff during the board meeting that she would at least want to see calculations about what "four and four" or the 5% would mean for the overall budget. Similarly, Trustee Jayme Mathias, who has called teacher compensation "a social justice issue," said he was particularly concerned about only going with a 3% increase when surrounding districts are considering anything up to 5% this year.

Board President Kendall Pace said that while there is consensus that there should be a raise this year, she's not sure there's a consensus for a multi-year commitment. With the school finance lawsuit ruling expected from the Texas Supreme Court on any Friday between now and the next legislative session, the underlying finances of the district could change radically before the 2017-18 school year.

Then there's the issue of incentive pay. This year saw the end of the district's REACH program, and the introduction of Professional Pathways for Teachers (PPFT). REACH was designed to encourage staff to work in what Pace termed "hard to teach" campuses. While preliminary analysis is inconclusive about whether REACH really affected student outcomes, Pace said, "what we found is that teachers really like the mentoring piece." So while PPFT will still encourage teachers toward the same campuses as REACH, it provides incentives for teachers districtwide to engage in professional development and ongoing training. "Really, PPFT is about valuing the profession," said Pace. However, because PPFT is open to all teachers, it will cost more than the campus-specific REACH. As a result, Pace said, in future years "across-the-board raises will go down, because more of that expense will go into PPFT."

While Zarifis said he supports PPFT for sending a positive message to committed teachers, he suggested that a base pay raise sends the same message. He said, "It's really about what commitment you have to people."

What a Pay Raise Means for AISD Teaching Staff

With the median teacher salary at roughly $48,000, the administration proposes a 3% increase for the 2016-17 school year, while staff union Education Austin wants either 4% a year for the next two years, or a one-time 5% bump. Realistically, many staff would see a fraction of this, since they'll be hit by soaring property taxes. Moreover, they get lower take-home than teachers in most other districts: AISD staff pay into both the Teacher Retirement System and Social Security, while most of their peers just pay into TRS.

AISD, With cost of living going up, teachers need a raise