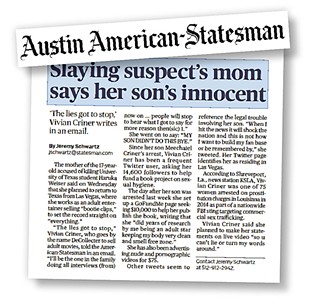 University of Texas student Haruka Weiser's murder on April 3 has yielded a wealth of media coverage of the perceived killer – to an extent not seen in Austin since Rashad Owens. Meechaiel Criner, the 17-year-old suspect in the slaying, is currently being held at the county jail in Del Valle, awaiting trial on a $1 million bond. His background and upbringing has since been dissected by the press – sometimes in a manner lacking responsibility or sense.

Not surprisingly, the Austin American-Statesman has led the charge on complete coverage. Since April 5, when Weiser's body was found by authorities in Waller Creek, the daily has published more than 30 pieces, with news flashes, event bulletins, and a breathless column from Ken Herman intermixed behind some press conference coverage and record reporting. Some stories, like the paper's tri-bylined breakdown of Criner's extensive troubles with Child Protective Services and foster care homes, are thorough and provide factual detail of Criner's clearly tumultuous upbringing. (That report, which was published online at 7:02pm on April 13, also received contributions from two additional writers, one reporting from Texarkana.) Others, like the nine-paragraph profile of his absent mother that went live four minutes beforehand, fuel negative rhetoric on topics much more expansive than the murder.

That story, titled "Slaying suspect's mom says her son's innocent," (the original version of the story also ran the next morning in print) recounts an email correspondence between the writer, Jeremy Schwartz, and Criner's mother, Vivian, in which Vivian denies allegations that her son is Weiser's murderer. The story also delves – both in the lead paragraph and throughout much of the second half of the story – into her professional life, specifying in detail various work pursuits in Las Vegas. It scans through her Twitter account, relaying posts unrelated to her son. The story's accompanying photograph is a mugshot. A quick scan of Vivian's Twitter account (which is now private) showed at the time that there were other usable photographs at the paper's disposal.

Schwartz, the story's author, typically reports on the military and border security. He's been stringing on the Weiser coverage and shares the byline on the CPS report (which also ran in the print edition Thursday). Upon its original publishing, Schwartz's reaction from Vivian failed to mention any of the family's enduring history with CPS, omitting also that she has been largely absent from her son's life since he was 3 years old. (He was raised by his grandmother until recently, though outlets, including the Statesman, have reported years of troubles within that home.) It fails to consider that Vivian, writing from Las Vegas, may have no intrinsic knowledge of the murder, and, like most mothers, will defend her son even in times of factual ignorance. Instead, the article's attention to her sex work reads as both demeaning and judgmental.

Perhaps the Statesman's News desk got the message about the oversight. Three hours after the story was published, an updated version appeared online that included a great deal of new context. Schwartz added a paragraph concerning rumors that Criner's mother was actually dead, as well as two sections on the family's relationship with CPS. The lede was changed – it no longer mentioned how Vivian sells "bootie clips" (with scare quotes and everything), instead focusing on how she planned to "set the record straight on 'everything.'" While still sensationalistic, the updated story at least begins to portray the troubled events of Criner's upbringing, and the lack of attention his mother paid to him. It does not include any editor's note indicating substantial changes.

Statesman Managing Editor John Bridges declined to detail any reason for story changes. He told the Chronicle via email on Friday that Criner's mother's history and treatment of her child is "obviously central to the story." He also said the omission of any editor's note after the update is irrelevant to the story's public progression. "We posted several versions of the story that day," he wrote. "In the digital age, it is not unusual for stories to continue to evolve and improve through various versions and edits in print and online. As in this case, the print version is sometimes an early version of the story." He declined to comment on what Vivian's current work history has to do with her estranged child's murder charge, and why it justified so much attention in the original story.

The Weiser/Criner story is a tragic one filled with more than enough societal overtones. We're not defending anyone in particular, just saying Vivian Criner isn't the person who's on trial.