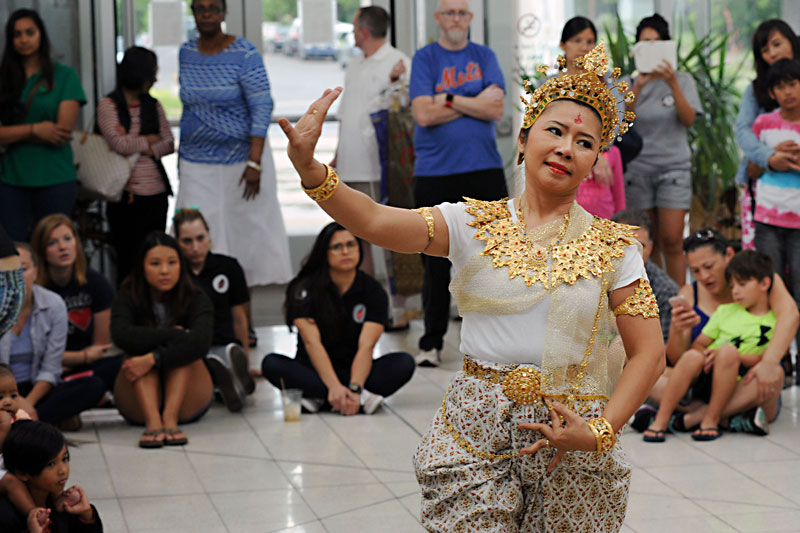 The gathered crowd watches Sirinlak Jordan's performance during the Celebrate Me! Thailand event on Sat., April 9. The Carver Museum was filled with Thai food, dress, history, and music to help the local community embrace and celebrate its roots. (Photo by John Anderson)

Tax day isn't April 15 this year. Due to Emancipation Day being observed in Washington, D.C., the deadline this year is April 18.

Former Mayor Lee Leffingwell has been hired by transportation political action committee Ridesharing Works for Austin as chairman. Some­what sadly, Leffingwell is the most prominent name currently identified with the TNC-supported Prop 1 campaign centered around the May 7 election. See "Leffingwell Shares the Ride," April 12.

On Friday, April 8, Meechaiel Khalil Criner was arrested and charged with first-degree murder in the killing of 18-year-old UT freshman Haruka Weiser. Criner, a homeless 17-year-old with a history in foster care, will likely face additional charges. The murder charge was announced just a day after the UT vigil held in the dance student's honor. See "Suspect in UT Homicide Arrested," April 8.

APD is one step closer to implementing body cameras on Downtown officers. On Monday, the Department announced the successful completion of its pilot program with Taser International. Next, the purchasing department will issue a recommendation for purchase to Council.

People's Community Clinic opened a new 59,000-square-foot headquarters at 1101 Camino La Costa. With help from a $10 million grant from the St. David's Foundation, the clinic will serve pediatric, adolescent, and adult medicine patients. PCC estimates it will double its previous patient capacity in a few years. The old facility at 2909 N. I-35 is now a PCC Center for Women's Health that provides cancer screenings and family planning services.

Inmate Jack Smith died of natural causes April 8 after 37 years on death row. He was, at 78, the oldest man sentenced to die in the state of Texas.