Giving Voice to the Voiceless

When Diana Claitor first began the Texas Jail Project in 2006, she had no idea she'd still be at it 10 years later. TJP, which aims to improve conditions in Texas county jails, was started by Claitor and environmental activist Diane Wilson after Wilson spent time in the Victoria County Jail and was appalled by the experience.

Wilson – who had been arrested on a criminal trespassing charge for climbing a Dow Chemical tower as part of a protest – wrote a letter to the Victoria County Sheriff that was later published on TJP's website as its first inmate story: "I want to inform you that I've read reliable reports, and have experienced horrendous treatment myself. While I was in the Harris County jail in Houston for five days, I joined fellow inmates stacked into cold holding tanks for hours and hours so that we were forced to sleep on cement floors strewn with trash and waste from backed-up toilets, while guards showed up at periodic intervals yelling, 'Pigs!'"

At first, the women believed that "there must be a solution," Claitor says. "We had no idea there were few places to turn for help." In the decade that's passed, Claitor, who is TJP's executive director, has fought an uphill battle for better care for jail inmates.

While there's a tendency to conflate jails with prisons, Texas county jails are separate from Texas prisons. Jails are run by each county's sheriff's department and hold people who are detained pre-trial, and those whose sentences are up to one year. Jails, with their ostensibly transient populations (although pre-trial detentions can last longer than you might think) and their lack of centralization, are in many ways less regulated than prisons. Each jail bears the mark of its sheriff's attitude toward confinement.

TJP has filed complaints on behalf of inmates with the Texas Commission on Jail Standards, the state agency tasked with overseeing county jails, and has appealed to the commission for changes in general. They've worked with legislators to pass bills requiring better care and oversight – last year Rep. Celia Israel, D-Austin, sponsored two bills related to the care of pregnant inmates and succeeding in passing one. And TJP has continued to collect inmate stories in an effort to educate the public on the harsh reality of life in Texas jails.

In 2014, TJP received a grant from the Public Welfare Foundation to create a new website dedicated solely to the stories of people in pre-trial detention. People who are held in jail pre-trial are either unable to post bail or have been denied the option. So by definition, these people are being detained before any determination has been made as to their guilt. The problem with this practice increases with the prevalence of lengthy pre-trial detentions. Desperate to leave, some detainees will accept plea deals, even if they believe they've been charged unfairly. Regardless of the ultimate outcome, however, pre-trial detentions tend to have serious and lasting negative consequences.

"A lot of our point," says Claitor, "is to make people aware that being in jail is often a disastrous event, even for a misdemeanor." Jailhouse Stories: Voices of Pre­trial Detention in Texas, which debuts March 31, groups stories into six categories: 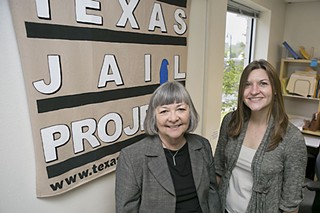 • lack of care during pregnancy

• damage to family and community

Rashad "Bluejay" Gilbert, who was locked up in the Travis County Jail, saw his life upended after he was released. Gilbert spent four months in jail before he even set foot in a courtroom. Although he felt the charge he faced (assaulting a public servant during the course of an arrest) was unfair, he accepted a plea deal in order to put an end to his pre-trial detention. On the website, Gilbert writes, "They go after the low-income people. They consolidate us all in one area, then they target that area. They send all the police there. So we're the ones going to jail. It's a circle of fuckery. If they can make a dollar off of us, they will. I had a bond of $25,000. It was ridiculous. I couldn't afford it." Gilbert tells the Chronicle that taking a plea "was the worst thing I could ever do in my life." He says "probation was a setup. I was just expected to fail." He needed to work two jobs to pay the fines associated with probation, but was expected to make his scheduled visits with his probation office regardless of his work schedule. Gilbert wound up going to prison and serving his time after violating probation. He says his girlfriend resents him for the time he missed being a father to their daughter. Although he now has a full-time job, he sleeps in his car, unable to find housing with his conviction history.

In some ways, however, Gilbert is fortunate. TJP has fielded countless complaints from family members of inmates who did not receive adequate medical care in jail, sometimes with fatal consequences. Connie Griffin's story of the suicide of her son Chad in Denton County Jail is one example. "During his incarceration," she writes, "his mental health issues went untreated, and his needs for care and medication went unmet. ... The stated cause of his death was suicide by hanging. This occurred while he was in a cell with two other inmates, with supposedly 15-minute checks by guards."

Griffin continues, "As a mother of an only child, I cannot express the pain and loss I have suffered and will continue to suffer. I now have to raise my 8-year-old grandson, who has been in my custody for over two years."

Collecting the stories was more difficult than Claitor expected. The grant TJP received required that the stories be limited to the experiences of people in pre-trial detention. Not only is it hard to communicate with people while they're in jail, but many former inmates are either wary of speaking publicly about their experiences, or are too busy rebuilding their lives to have the time to do so.

The grant allowed Claitor to hire Emily Ling, a former ACLU staffer, to assist with the process. Later, Abe Louise Young, who has a wide range of experience collecting oral histories, was brought on help create the website. Ling says that "confinement is part of a much larger story. We need to be asking the question of why people are held so long pre-trial. It's not up to the jail. It comes down to having reform at a judicial and police level." However, as long as the problem exists, the Texas Jail Project will be working to get care and advocate for those in jail.