Last week, Council passed a handful of labor reforms; this week: a look at the city manager 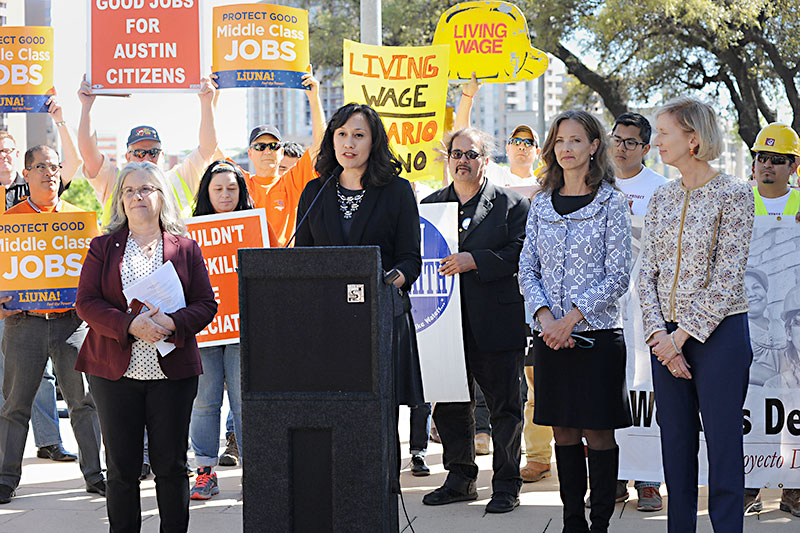 Public testimony regarding the living wage resolutions was relatively brief: Construction workers and employees of subcontractors such as airport vendors talked about how the measures would improve their quality of life, as did supporters from Workers Defense Project, Austin Interfaith, LiUNA, and other labor groups. The two measures passed with opposition from CMs Don Zim­mer­man and Ellen Troxclair (Sheri Gallo was absent).

In contrast, testimony regarding the non-discrimination resolution was lengthy. Employees – some speaking on behalf of women who wish to remain anonymous – took turns at the podium recalling startling instances of gender bias, harassment, and lack of effective recourse from the city's HR department.

Born from recommendations from the city's Human Rights Commission and last year's sexist training session geared toward handling a woman-majority council, Tovo's resolution asks the city manager to study all the anti-discrimination policies and, by June 30, update definitions of discrimination, harassment, and retaliation, and create an anonymous complaint process. It also requests an external audit (due Sept. 30) to review investigations of alleged discrimination, harassment, and retaliation filed between 2010 and 2015, and calls for a third-party appeals process for cases involving allegations when an employee is dissatisfied with the city's standard process. Troxclair, who said she wanted more data and best practices from other cities before selecting an independent review body, asked that the first two items be separated for a vote – all CMs voted to pass. The appeals process items passed with Troxclair abstaining and Zimmer­man opposed.

The meeting concluded with testimony regarding Casar's Fair Chance Hir­ing resolution. The ordinance prohibits employers with 15 or more employees operating in Austin from asking about a job applicant's criminal record until the point a conditional offer of employment is made (exceptions for jobs where a criminal record is relevant are written into the ordinance). It passed with Zimmerman and Troxclair voting no, making Austin the first city in the Southern U.S. to pass such a law applying to private employers. For more, see "Austin Extends Living Wage," "Council Approves Workplace Non-Discrimination Measure," and "Austin First Fair Chance City in the South," March 25.

Council will address a 67-Item agenda this Thursday, March 31. During their Tuesday work session, the City Clerk's office offered its recommendations relating to Item 16, an ordinance that would revise electronic campaign finance forms. The clerk suggests the election documents should meet the same filing deadlines as the Texas Ethics Commission campaign finance forms; redundant reporting requirements should be eliminated; and the complexity of the reporting could be reduced by redesigning the forms to look similar to the TEC forms and be formatted to PDFs. Opponents say the draft ordinance would reopen campaign finance loopholes that were just closed in 2012.

Council plans to vote on two agreements that make good on the promise to increase investment in social services per its December 2014 budget policies: Item 19 approves a $2.28 million deal with 13 agencies including Caritas, Goodwill, and Family Eldercare to help self-sufficiency social services (for a total combined amount of $40.3 million over a 37-month term from Sept. 2015 to Sept. 2018). Item 20 is a roughly $1 million agreement to provide community-based health prevention for a 12-month term beginning April 1, (with five 12-month renewal options of roughly $1 million each, for a total contract amount of $6.3 million). Zimmer­man had his usual gripes during work session about directing taxpayer dollars to social services, calling the $40 million an "obscene waste of money" and one of the reasons we find ourselves in an affordability crisis.

Council will also take a look at a resolution (Item 21) allowing partial use of the Density Bonus Program fee-in-lieu option under the Plaza Saltillo Transit Oriented Development for a project at 310 Comal in Council District 3. In exchange for extra density to build, the developer will give more than $93,000 to the Housing Trust Fund instead of building affordable housing on-site. However, in this case the trust funds would help offset costs for one family-friendly affordable housing unit on-site. D3's Pio Renteria hoped to ensure that community residents would have first dibs on that unit.

Council spent a considerable amount of time in executive session Tuesday addressing affordable housing, legal issues, and the performance of and compensation for City Manager Marc Ott. They're expected to take up that last item of conversation on Thursday.

Also on the agenda are approval of TxDOT funds for bike stations; approval of an application for Austin to collaborate on infrastructure and service improvements as the next member of MetroLab, a network of city governments and university partners; and a 12-month agreement with the Capital Area Council of Governments to fund clean air programs, along with some 34 items related to construction contracts and purchasing agreements.

Mayor Pro Tem Tovo will lead Thursday's Council meeting, as Mayor Steve Adler will be in San Diego dealing with transportation and mobility issues as part of the Smart City Challenge.