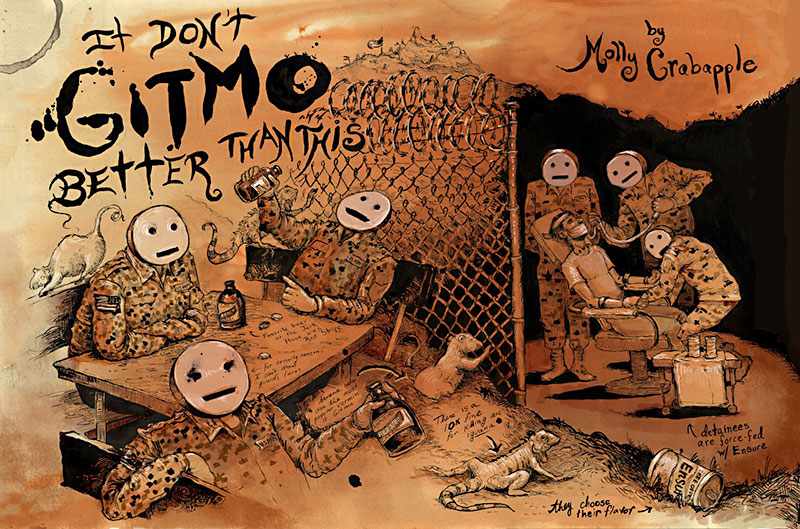 Before the news photographer, there was the artist-correspondent. Yet even after the camera became ubiquitous, news outlets relied on the power of drawing to evoke emotional immediacy. Alfred Waud sketched Pickett's Charge for Harper's Weekly. Ronald Searle risked his life to record the horrors of his imprisonment, slaving on the Siam-Burma Death Railway. Life had a cadre of artists documenting World War II. Now artist-turned-reporter Molly Crabapple is reviving the art of illustrated journalism.

Her work is a fusion of Hunter S. Thomp­son's first-person reporting and Ralph Steadman's baroque illustrations. A respected artist for years, it was Crabapple's 2013 visit to report on conditions at Camp X-Ray in Guantánamo Bay ("It Don't Gitmo Better Than This," Vice, July 31, 2013) that brought her international recognition as a journalist. Her work was the solution to a problem: Photography was restricted, but Crabapple could sketch whatever she saw. She said, "I drew around the censorship."

It may seem like a major transition from her time as staff artist at New York's the Box variety theatre, yet she argues that drawing patrons' portraits requires the same interpersonal skills as drawing an Occupy activist, or a Guantánamo Bay inmate, or an abused sex worker, or a Syrian refugee. She said, "Art was always this way of picking locks, whether the lock was that I wanted to be friends with people – because I was very awkward – or whether it was that I wanted to be in nightclubs, or I wanted to go in somewhere. Art was always the way that I drew around obstacles." 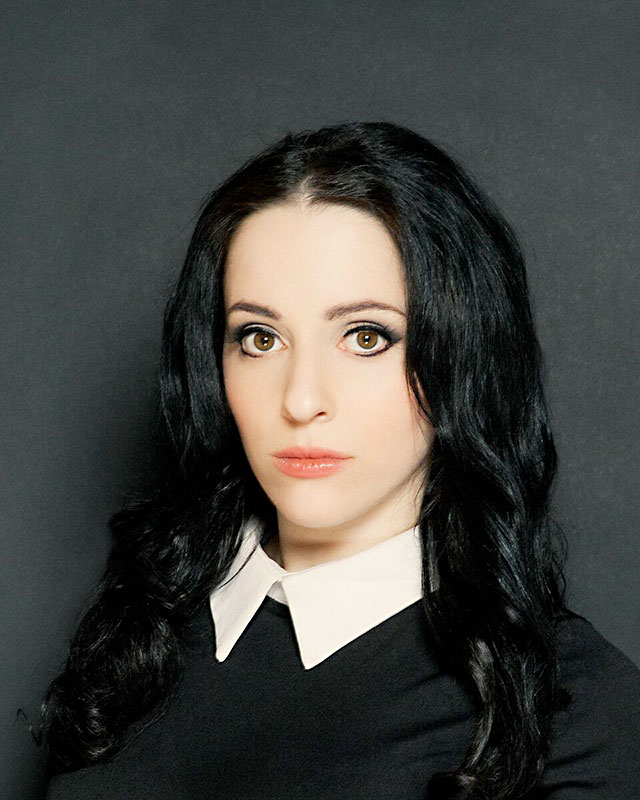 There's a sense that everything Crabapple does is a learning opportunity for her, as she immerses herself in the environment and gets to know her subjects. During SXSW, she was working through a friend's book in the original Arabic, as her work increasingly focuses on the shifting borders and refugee crises of the Arabic world and south­eastern Europe. Calling the Syrian conflict "the fundamental moral crisis of our time" (adding "the only reason it's not being acknowledged as a world war is because we think world wars only happen in Europe"), she compares the modern footage of refugees fleeing to Greece with images of Greek refugees lining up at Red Cross trucks in Syria during World War I. "There's this impetus to divide the world up and say, you're a citizen of here, you're a citizen of here, and that's never existed, and it will never exist."

Crabapple has been a SXSW regular since 2010: In earlier years, she came as an artist, even designing the 2011 Interactive tote bag. Her return to SXSW 2016 emphasized her new role as an activist journalist, and her most recent work is what she calls illustrated op-eds. As shown in the Strategic Storytelling: Video as Policy Changer panel, in "Why Solitary Confinement Is Modern Day Torture," she uses her art to explore the psychological damage done to inmates by being locked away from human contact. The video uses time lapse photography to capture her drawing scenes, then drawing over them, creating an effect unto real-time animation. "They really are destroyed," she said. "It's very cathartic."

That catharsis was also part of her transition from fine artist to artist-correspondent that she dubbed the Week in Hell: In 2011, backed by Kickstarter donations, she spent five days in a room covered in paper, and just drew, and drew, and drew. The purpose, she said, was to "dump out every single fucking cliche, until I can't draw any more, and then when I'm empty of all of that, see what comes out. ... I was sick of everything, and I wanted to do something cathartic to change it."

In the months after she emerged from that artistic purging, she found herself in the middle of history. Her New York home overlooked Zuccotti Park, so she was at Ground Zero for Occupy Wall Street. She wasn't simply a passive onlooker: Instead, she said, "I turned my apartment into a press room. You know how journalists are, you have one of them and then before you know it, they've come together on your floor and are using all of your power outlets." Through friendships with those same couch-crashers like The Guardian's Laurie Penny and Natasha Lennard of The New York Times, she said, "that was when my art started getting more journalistic."

Her initial reporting was deeply embedded with the Occupy movement, producing a series of portraits of protesters under the banner "Faces of Occupied Wall Street." She followed this with "Shell Game," a gallery show of stylized depictions of the economic meltdown. However, that work hewed close to the grand satirical traditions of British artists like Will Hogarth and James Gillray. That changed in 2012, when she and Penny traveled to Greece to report together on the austerity riots. The end result, Discordia: Six Nights in Crisis Athens, was "my first time working with an amazing journalist like Laurie, seeing how she did it, seeing how I would have worked differently, learning the techniques of interviewing people, fact-checking, all of that."

Since Athens and Gitmo, she has reported from the bulldozed wreckage of Gaza, recorded the unconstitutional imprisonment and civil rights violations of sex workers in Arizona's Project ROSE, and chronicled the brutality of New York state's Human Trafficking Intervention Courts, where women have been charged with prostitution for carrying condoms. Last year, she collaborated with an anonymous source in Raqqa, the center of ISIS in Syria, who has been posting stories under the watchful gaze of his oppressors. "He's the greatest human being I have ever met in my life," she said, and it's that kind of human interaction that may define Crabapple's career as a reporter. She said, "I feel nothing except gratitude to anyone who bothers to speak to me, because the whole thing is coming from them to me, not the other way around."