Lyft passenger gets a wilder ride than he bargained for 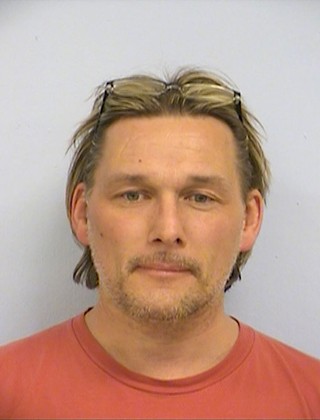 Alex Grant got off work around 10:40pm on Tuesday, March 8. Since he doesn't have a car, Grant normally rides home with a co-worker, but on that night, the co-worker had left work early. So he ordered a Lyft, as he's often done over the last two years.

Grant didn't think much of it at the time, but before picking him up, the driver – 44-year-old Allen Edmonds – parked by the side of a nearby parking garage for a few minutes. Then, when they pulled onto Parmer Lane, Edmonds drove into the shoulder. As the trip progressed, Edmonds was weaving; at the time, Grant says, "I just thought he wasn't paying attention." As they got closer to Parmer and MoPac, it became clear something was up: "He braked at a green light and then veered over into another lane in the middle of an intersection. Then I was like, 'Okay, well I need to get out of the car now.'" At the point Grant considered asking Edmonds to stop and let him out – about five minutes into the 10-minute drive – the cops pulled them over, after an officer saw the car swerving and failing to signal when crossing lanes, according to court documents.

While Grant says the police "response was pretty great," he did have to wait at the scene for about 40 minutes while Edmonds went through – and failed – sobriety tests. Edmonds admitted to drinking two beers before driving; police also found seven tallboy cans of Lone Star and five PBRs in his car, along with an empty Lone Star in his middle console. Edmonds, who police said smelled of alcohol and was "mumbled, confused, and swaying," declined to take a Breathalyzer test, lost his balance, turned improperly, and failed to touch his heel to his toe.

After waiting for the DWI process, Grant, stuck without a ride, walked to the nearby Mothership Books & Games, and called Lyft's 24/7 critical response team. The next morning, Lyft reached out to him and offered him five free rides (with a maximum $25 value each), which, Grant told KVUE, "Kind of puts a weird value on my life, right?" While Grant was told that the rides "weren't meant to be compensation," he tells the Chronicle that he "hasn't really heard anything from [Lyft] since." Grant says he's "going to seek legal counsel."

Lyft said in a statement to the Chronicle, "We have a zero-tolerance drug and alcohol policy for drivers and any behavior threatening the safety of a Lyft community member is not tolerated. As soon as we learned of this incident, we permanently removed the driver."

With the City Council and transportation network companies debating regulations and background checks for drivers, it's notable that, according to KVUE, Edmonds was arrested in 2004 "for DWI, possession of a controlled substance and obstructing highway passageway." The prosecutor dropped the DWI charge after Edmonds pleaded guilty to two drug possession charges, for which he served two days in jail; he got 18 months probation for the obstruction charge.

In a statement to the Chronicle, Lyft explained, "Our criminal background check process includes a thorough review of local, state, and federal databases. According to the Fair Credit Reporting Act, we are not able to see arrests that didn't result in conviction that are more than seven years old." While Lyft wasn't able to prevent the incident, they were able to react very quickly – Lyft immediately knew exactly who the driver was, who his recent passengers were, and where his routes were.

Taxi companies in Austin fingerprint their drivers, and their background checks go back further than seven years, but only include Texas, unless the driver recently moved from another state. However, many serious crimes – including homicide, sexual assault, drunk driving, and more – are not necessarily disqualifiers, so it's quite possible that Edmonds could have gotten an Austin chauffeur's license as well; while the number isn't clear (since it's on a case-by-case basis), officials have admitted that some legal Austin taxi drivers do have criminal records.

Despite the experience, Grant tells the Chronicle he still plans on using Lyft, at least until he gets a car again: "Honestly, I've never been a fan of Uber. They take longer to get there, in my neighborhood at least, and they're a little bit more expensive."

Grant says, "More stringent background checks could've probably prevented me from being in that situation." But, he adds, "At the end of the day, it was the driver that made that decision to get drunk and fire up the app, you know?"