A Tour for the Chicken-Curious

Backyard chicken coops as a path to zero waste 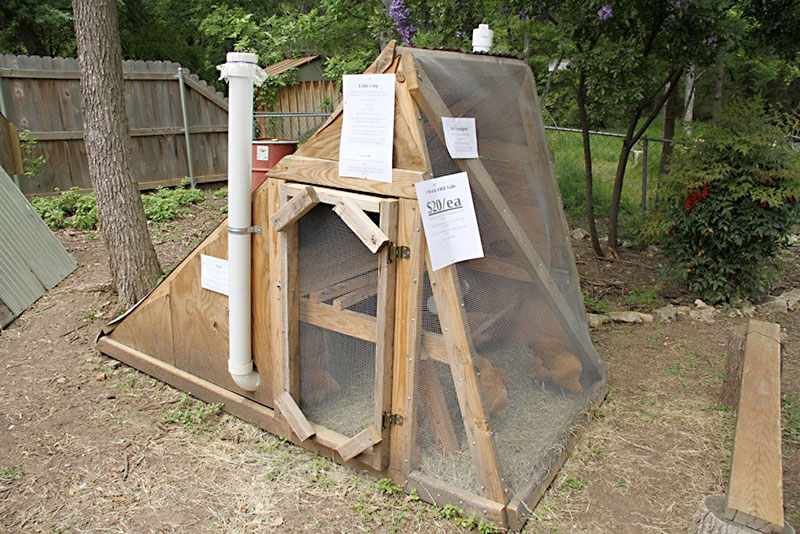 The scene in Brett Davis' backyard is remarkably pastoral, considering its location just off busy Manchaca Road. Twenty chickens scratch in a carpet of fallen oak leaves, snacking on bugs. Goats caper and butt heads as a handful of ducks waddles past, while in a nearby pen a mama goat tends her two-week-old twin kids. In the middle of the yard stands a brightly painted chicken coop, decorated with a stained glass window, antique door and festive lights – home to 20 adult chickens and, eventually, the 12 chicks Davis has inside his house.

"I didn't grow up with any of this," says Davis, who was raised in Los Angeles. "I was a city boy, so with all this I'm like a kid in a candy store. I think people feel disconnected from their food, from the land, and from each other, and this is a way to get that connection back." His foray into urban agriculture started in 2010 with a visit to the backyard coops of Austin's annual Funky Chicken Coop Tour. This Saturday, Davis' yard will be a stop on the 2016 tour, which gives the chicken-curious a chance to learn from experienced chicken-raisers.

The 10-coop tour was started in 2009 by Austinite Michelle Hernandez, founder and president of the Urban Poultry Association of Texas. The Funky Chicken Coop Tour was among the first of its kind in the U.S.; now Hernandez gets calls from across the country asking for advice about starting one.

This year's theme is "Chickens as Zero Waste Heroes," a reference to the birds' capacity to turn kitchen scraps and yard trimmings into eggs, fertilizer, and compost instead of waste. As Austin emphasizes composting as a way to meet its goal of zero waste by 2040, Hernandez says the city should also encourage backyard chicken-keeping. Chickens are omnivores and can eat most fresh, clean kitchen scraps (for a balanced diet and better egg production, they also need chicken feed).

Hernandez's Urban Poultry Association is partnering with the Gossamer Foun­da­tion, which focuses on chickens as a component of sustainable agriculture, on an upcoming study to validate their theory that chickens are already a key part of the city's recycling system. Chickens typically eat about a quarter-pound of food a day, or 84 pounds a year. Paired with Hernandez's data about the Austin chicken scene – she estimates 3,100 local households (about 1% of the total) raise a total of 24,000 chickens – that means Aus­tin chickens are diverting more than 1,000 tons of food from the landfill each year.

"Chickens are unsung heroes because they're eating the scraps off the table, they're eating bugs that could be pests in the garden, they are helping keep everything in control without pesticides, herbicides, and so forth, and they're doing it right here, locally," Hernandez says.

She'd like to see more Austinites raising chickens and diverting waste, both by feeding kitchen scraps to their flocks and by mixing yard trimmings and leaves with chicken manure to make compost. She's talking with the Office of Sustainability and Austin Resource Recovery about whether the city can offer rebates for backyard chicken coop equipment the same way it subsidizes compost bins. "This is just a branch of composting, where the chickens are the composting system," she explains. (It's a good idea, but more research is needed, a Resource Recov­ery spokeswoman says.)

If even 10% of Austin's households added chickens, Hernandez says, the cost and energy savings in curbside collection would be substantial. "Let's see what we can do to show that this is more than a trendy thing, and more than just local food," she says. "This is a viable economical solution."

The self-guided Funky Chicken Coop Tour runs 10am to 4pm Saturday, March 26. Tickets are $10 (children 12 and under free) and can be purchased at www.austincooptour.org.